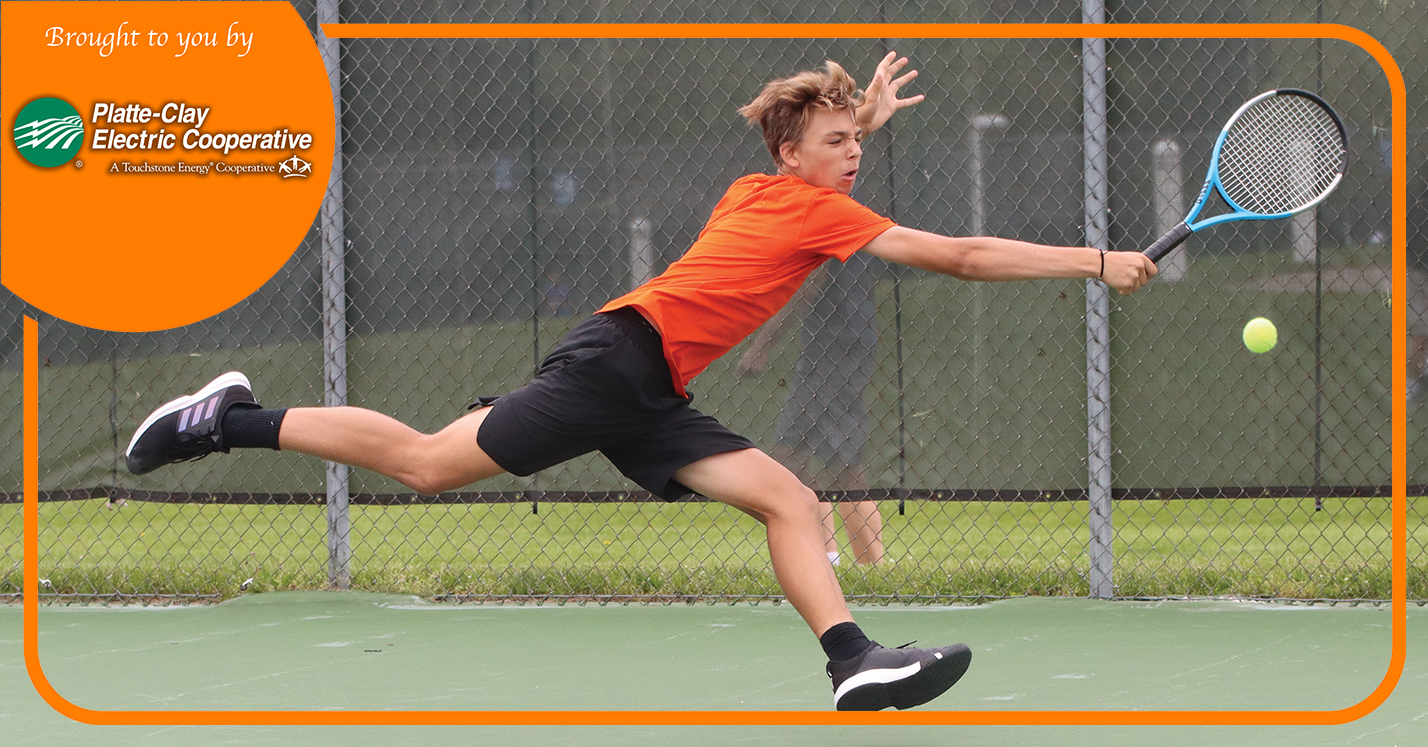 The list of firsts continued to pile up for Platte County freshman Gavin Nichols late the season. By the end of the Class 2 Missouri State Tennis Championships, he had rewritten essentially the entire program record book.

Nichols went 3-2 in the singles bracket, closing the two-day tournament with a dramatic victory to earn a seventh-place medal. He won the Class 2 District 8 tournament to become the first individual district champion in program history and first state singles qualifier.

With an opening 6-3, 6-2 win over Jacob Ford of Central (Cape Girardeau), Nichols became the first in program history to win a state match. He dropped into the consolation bracket with a quarterfinal loss but but came back with a 4-6, 6-4, 10-8 victory over Cameron Fisher of Lebanon to reach the medal rounds.

A straight set consolation semifinal loss put Nichols in the seventh-place match and responded with what veteran Platte County coach Zach Keith called the best match for him this season. He fought off two match points for 4-6, 6-4, 12-10 three-set marathon win over Gavin Brown of Branson.

Notably, Nichols lost the first set in both of his three-set wins, fighting back the hardest way possible.

Nine of Nichols’ Platte County teammates made the trip to state to watch and provide support in addition to the coaching staff. For many years a successful program stuck in a two-class system, the Pirates benefited from a chance in postseason format this season. They remained in Class 2, but the addition of a third class moved them away from the largest schools in the area for district competition.

For that reason, Nichols’ historic tip to state was not only for him and a roster of inexperienced players forced into their first varsity action due to last spring’s canceled season but also for many players before him likely talented enough to reach state if given the same opportunity.

Nichols opened the season at No. 2 behind junior Austin Vanek, who played No. 3 junior varsity as a freshman and entered as the most experienced player for Platte County. Late in the year, Keith moved Nichols to the top of the lineup and entered him the Class 2 District 8 singles bracket, where he warranted the top seed.

By reaching the Class 2 District 8 singles final, Nichols became the first singles state qualifier in Platte County history and first individual state entrants since the doubles team of Ethan Savage and Aaron Stout back in 2010 when the Pirates were still in Class 1.

Platte County also earned the No. 1 team seed and advanced to the district championship dual for the second time in program history, but Kearney avenged an earlier loss with a tight 5-4 victory to reach the playoffs. The Pirates have now twice reached the district final but have lost both, the last coming in 2018 to Park Hill South.

Finishing with a 9-5 record, Platte County earned the program’s first-ever win over Park Hill South late in the regular season behind a senior-heavy roster behind Nichols and Vanek that included Daunte Alaiwat (third in Class 2 District 8 singles), Bradley Beeson, Emilio Escamilla and Tony Railsback. Beeson and Railsback went unbeaten at No. 3 doubles in duals and finished third at districts, beating Vanek and Escamilla in the third-place match.