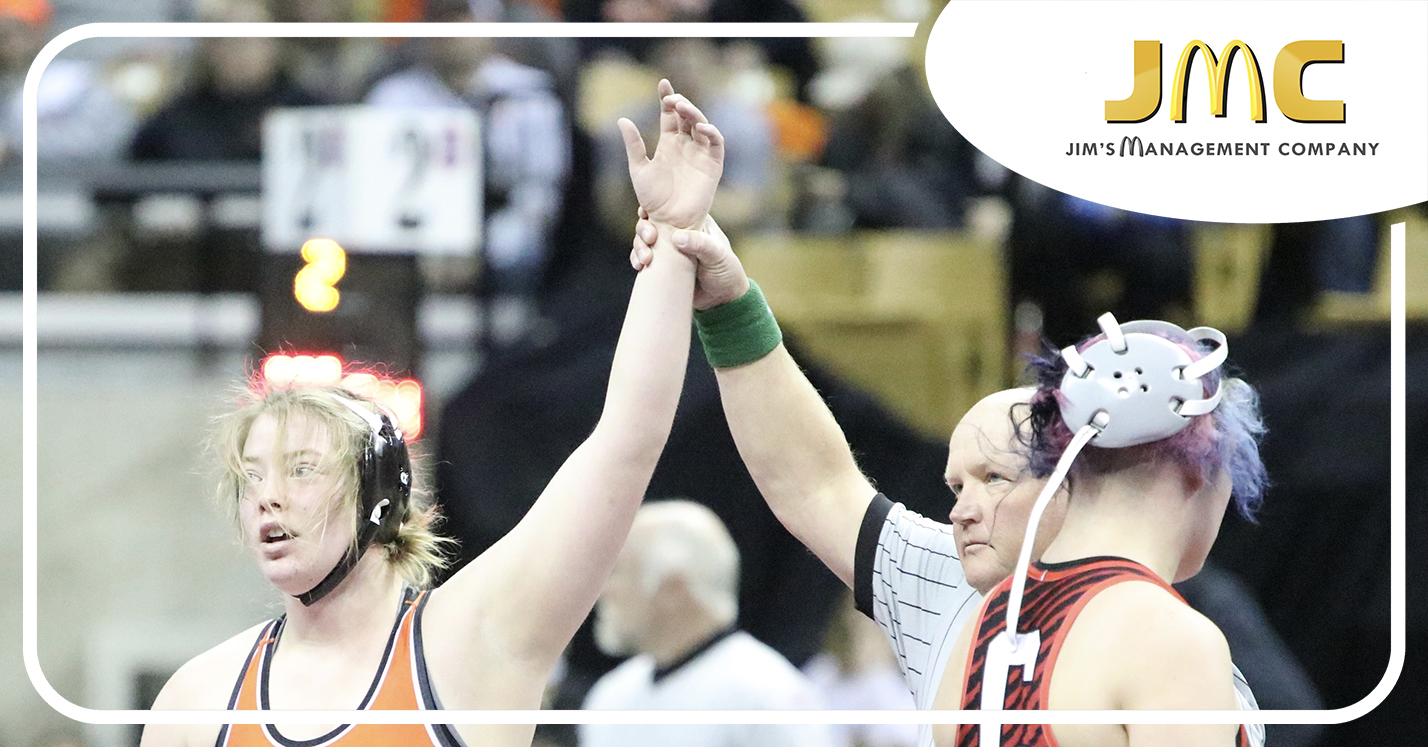 COLUMBIA, Mo. — No record book existed when KayLyn Munn joined Platte County’s inaugural girls wrestling team. Four years later, the Pirates senior standout leaves having written and rewritten the contents multiple times. For now, she owns nearly every meaningful record and superlative for the program’s short history and leaving behind a legacy that can never be erased.

Munn brought her career to a fitting close Saturday night in the 194-pound title match of the Girls MSHSAA Wrestling Championships at Mizzou Arena. She topped Springfield Central junior Catherine Dutton with a 2-0 decision to become the Pirates’ first state champion in program history in what will be the last and most memorable moment for the only wrestler there from inception to now.

“Knowing that she’ll be the first and will always be the first is a testament to her hard work and her dedication to the whole program,” Platte County coach Reggie Burress said.

Munn’s list of defining accomplishments for Platte County is exhaustive. She is:

“I still don’t feel like it’s over,” Munn said shortly after securing the state title. “It’ll hit me tomorrow though. I haven’t really cried over it yet; I haven’t really told my coaches how I feel about them yet, but right now we’re just living in the victory minute.”

The list might also include a statewide superlative. With no other records to the contrary, KayLyn Munn and her father Jason Munn are believed to be the first father-daughter state champions in Missouri history. Jason Munn won a state title in 1988 at Kirksville, while Munn is one of the first 48 girls state champions crowned since the Missouri State High School Activities Association first sponsored the sport for the 2018-2019 season.

To reach the top of the podium, KayLyn Munn (35-3) went the full 6 minutes in all three of her matches and avenged two of the minimal losses on her career ledger along the way, none more meaningful than the state finals rematch with previously unbeaten Dutton (27-1).

A year earlier, Dutton turned and pinned Munn at 3 minutes, 11 seconds in the second period of a 195-pound championship match she led 2-0 after the first period. This time, Munn and Dutton went into the second period scoreless, and Dutton chose the top position to start the second. She rode out Munn for the entire 2 minutes, sending the match to the third period still at 0-0.

Munn chose neutral and eventually found the opening for a takedown with 52 seconds left in regulation to take a 2-0 lead.

“I just noticed some things in the match,” Munn said. “Like I said before, I wanted it more. I noticed a couple of things while I was wrestling that I could just capitalize on, and I did.”

The advantage held up for a 2-0 decision win for Munn with Dutton finishing the match flat on her stomach, never able to threaten to escape and appearing to have given up in the bottom position.

Munn did not have a flashy celebration but did flash a smile at her coaches in the corner in the final seconds of the championship match. She completed a journey from qualifier at 187 who missed a medal by one match to sixth place at 187 as a sophomore to state runnerup at 195 as a junior to Platte County’s first state champion as a senior at 195 after the weight classes changed again prior to this season.

The steady climb toward, onto and to the top of the podium mirrored her overall progress as a wrestler the past four years.

“She does a lot of the little things right,” Burress said. “She’s obviously the underdog in everybody’s mind, but I think in her mind she wants to go out and give it all she can and see what happens. Others seem to think she might not be the best or the toughest, but she’s going to give you full effort with attention to details and she came out on top.”

Platte County went to state with a program-record three qualifiers and tied for 23rd behind Munn’s championship performance. Audrey Call and Elizabeth Humburg — two more seniors — both went 1-2 in their brackets while making state debuts.

A second-year senior, Call (34-7) entered the 135 bracket off of a runnerup finish at District 4 two weeks earlier. She went back and forth with Fort Zumwalt West sophomore Maria Ignatova (26-9) in an entertaining first round matchup. Ignatova took an early lead of 4-0 and went into the second period up 7-3 before Call closed the gap with a takedown and late reversal.

Call still trailed 11-9 in the third period when she threw and pinned Ignatova at the 4:21 mark. However, Call lost both of her matches on Friday, first by fall in the first period to Clinton freshman Amitira McNack (48-2) and then in the third period of a wrestleback match vs. Eureka senior Emily Neumann (40-6).

“Audrey lost to two girls, and they wrestled in the third- and fourth-place match,” Burress said. “She got a win and then wrestled the girl who took third and the one who took fourth. That’s tough.”

A third-year senior, Humburg (28-11) finished fourth at 125 in District 4 competition and faced a difficult path in her bracket. Webster Groves junior Talia Lee (26-4) pinned Humburg in 21 seconds in the first round, but she came back to pin Belton junior Brionna Madden (39-10) in the third period of a first round wrestleback on Friday.

That set up a meeting with Excelsior Springs senior Jacey Brewer (34-8), the District 4 runnerup two weeks earlier. Brewer led 6-2 late when Humburg hit a double leg takedown that put Brewer to her back but time ran out before she could accrue potential tying or winning near-fall points.

Despite the Day 2 exits, Humburg and Call became just fourth and fifth in program history to win a match at state, joining Avery Krahenbill, Sarina Bertram and Munn.

“Three girls came and all three of them won matches here,” Burress said. “It showed that they belonged here. Humburg, in my mind, should have won her last match where she puts the girl on her back for I counted 3 seconds and we didn’t get a two count. That’s OK. That can be a character builder, and we go on.”

That left Munn to carry on for Platte County despite facing some adversity. She wrestled all four of her matches with a taped and bandaged left hamstring after tweaking the muscle during practice earlier in the week.

Saying before the opening match the hamstring was “as good as it’s gonna get,” Munn dominated in a 14-1 major decision over Washington junior Paytin Welsh (22-14) to set up a featured quarterfinal.

Munn’s last two losses this season came against two wrestlers in the 194 state bracket, the first against Lebanon sophomore Mariyah Brumely in the finals of KC Stampede in December. Munn led in the match before going to her back and being pinned in the second period.

The two met again in the state quarterfinal, and Munn came out on top of a scramble late in the first period, coming away with a takedown and putting Brumley (39-6) to her back for a five-point move. Munn’s 5-0 lead held until the third period when she gave up a penalty point and an escape but still came away with a 5-2 decision.

“I think just setting my own pace and realizing my strength and how far I’ve come, especially against someone I haven’t won against,” Munn said of the key to winning the rematch. “I faced her at Stampede, and I was winning, got stuck, but I’ve been working. I’ve been putting my mind to it, just kind of working on the nitty gritty and my mental and just being there, ready to flow out and scramble against anything.”

In the semifinals, Northwest (Cedar Hill) sophomore Abigail Chandler (34-7) went into the second period scoreless against Munn and chose the top position. Almost inexplicably, she let Munn up for an escape after 40 seconds to give away a 1-0 lead.

Munn chose down in the third period and escaped again for the last points of what ended up the first of two consecutive 2-0 decisions that resulted in the historic state title.

Possibly limited due to the hamstring injury, Munn didn’t allow a single offensive point in four matches. She never panicked nor showed vulnerability to close out what will be the defining career for Platte County’s program for years to come.

With the state likely to split girls wrestling into two classes starting in 2022-23, no one will ever achieve the same milestones in the same statewide environment like Munn, and her records are likely to stand for the foreseeable future, even as the Pirates look to continue the growth shown this year with a nearly full lineup, three state qualifiers and optimism for the future.

“I think the biggest thing is that the girls we have, they believed in the process,” Burress said. “They kept getting better year after year, and those three girls that are here at the state tournament did a lot of extra work last summer. There was a lot of extra work when people were doing other things that might have been more fun, but they did it because they knew they needed to do it to get down here. It showed a big jump in their wrestling ability and their leadership ability for the younger girls.”