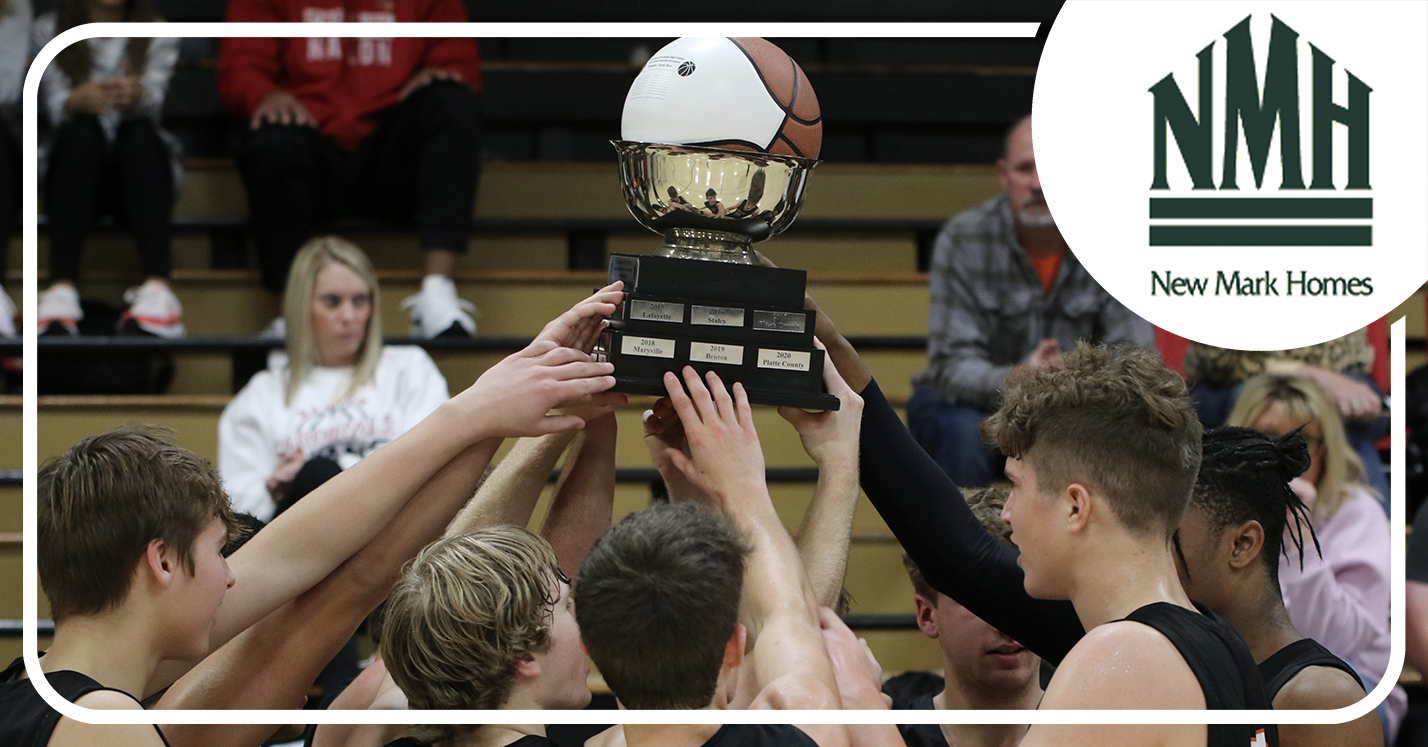 The offense didn’t always look crisp. There were scares with foul trouble. The closing moments featured a lot of emotion ahead of a quick rematch.

In the end, Platte County’s inexperienced roster leaned on the play of senior guards Jarett Mueller and Jace Trimble to pull away for a 71-57 victory over Benton in Saturday’s championship game of the Savannah Invitational. The Pirates took home the basketball-in-a-metal-cup trophy for the second straight year, providing an early shot of confidence for a roster of nine replacing seven seniors from last season’s memorable 20-win campaign.

Mueller poured in a team-high 22 points despite hitting only one early 3-pointer, while Trimble added 20.

“It was really nice to go back-to-back,” said Mueller, who went 9-for-9 on free throws in a 27-point fourth quarter for Platte County. “We won it last year and worked really hard to get back to the same position this year. Everybody did a great job, doing their part, chipping in. Everybody played really well this (week). I’m happy.”

Mueller and Trimble combined for 28 of Platte County’s 42 points in the second half, while senior forward Isaac Havemeier added 11 points in just his third career start, all coming in the week’s season-opening tournament.

Benton trailed by eight at halftime and made the occasional run thanks to 10 3-pointers but never came closer than six in the second half. Platte County led by as much as 15 late thanks to the high-scoring senior trio.

“I’m happy with how they played,” Platte County coach Rick Hodge said. “The results? It’s so early in the season. Obviously, you win a championship; you have the first-place trophy. You’re happy and excited. But as a coach, I was glad to see us handle (the pressure).

“There’s definitely things we definitely have to work on. There’s some things we’re disappointed in, but I was happy more with how they played.”

Platte County led by double digits for much of the game, and Havemier’s basket out of halftime made it a 31-21 advantage for the Pirates. Benton responded with a pair of 3s sandwiched around another basket to draw within 33-27.

Mueller contributed a pair of key buckets in the third quarter, and Platte County senior forward Brody Fulk split a pair of free throws with 57 seconds left before the fourth quarter to put the Pirates ahead by a seemingly comfortable 42-31. Instead, Benton senior Kason Mauzey converted a four-point play in the right corner after drawing a shooting foul on Fulk during the shot.

Platte County received an important boost when junior guard Boston Wahlert got a basket before the buzzer to make it 44-35 again. Wahlert finished with six points after contributing a pair of fast-break layups during important first half minutes with Mueller in foul trouble.

Early in the fourth quarter, Platte County sophomore reserve guard Judah Vignery hit a 3 from the left corner to make it 47-37, and Benton rarely came within one possession from there.

“I told the kids that. I said, ‘All nine of you contributed,'” Hodge said. “Boston Wahlert with two layups in the first half that gave us something. Judah comes off on a set play and pops an elbow jumper (in the second quarter) and then hits that 3. That’s what role players do.”

Platte County navigated a technical foul whistled on Fulk to maintain its lead with Mueller converting a three-point play to make it 54-42. The free throw on the back end started his perfect run from the line in the fourth quarter, and Trimble added another three-point play starting with a nifty running bank shot.

Havemeier missed his chance at a three-point play moments later, but all three of the key momentous baskets elicited animated responses from the Platte County players in a charged atmosphere. Benton brought a sizable student section up the road to Savannah High School, and the Pirates were sure to enjoy the double-digit victory and collection of the trophy after enduring a fair amount of good-natured trash talk during the game.

The two teams were already set to play Tuesday in a regular season matchup at Platte County High School, meaning the emotions for both teams should be easy to rekindle.

“It was a bit of struggle the first half, but I’m glad we pulled through,” Mueller said. “We just had to keep our cool, calm down. The crowd got into it pretty good for them. It was good to calm down, stay focused, finish off the game.

Platte County gifted a 4-0 lead to the Cardinals with Mueller having a 3-pointer blocked on the Pirates’ first possession and the second ending with a turnover. Both led to quick baskets and the early deficit, but the Pirates responded with a 7-0 run that included a one-handed hammer dunk from Bradley and a Mueller pull-up 3 in transition.

“We didn’t just lay down, roll over,” Mueller said. “We got back up, gave it our all and ended up winning by 14, so we played really well coming back from being down.”

Benton forged a final tie at 9-9 before Platte County rattled off 11 unanswered to take the initial double-digit lead. The advantage would dwindle to 20-17 during a prolonged offensive drought for the Pirates, but Mueller hit back-to-back buckets — the first creating an opportunity for a three-point play only for Mueller to miss at the line for the third time in the first half.

The final big chance for Benton came when Mueller picked up his third foul on a charge that negated a potential three-point play opportunity.

Fulk, who finished with four points, immediately came up with a layup for his only field goal of the night to make it 28-18. The Cardinals ended up milking away the majority of the final minute before Bachali hit deep two with his toe on the line in the left corner at the buzzer to make it 29-21 at the break.

Platte County survived the time without Mueller, and although Hodge sat him and Trimble with three apiece late in the third quarter, the foul trouble scare ended up being minimal. Havemeier was the only player for the Pirates to finish with four fouls.

“Not just Jarret but Jace. What I had to keep telling the kids, those two, they play at such a high energy level, and they play hard and they’re playing fast,” Hodge said. “But once they have those types of fouls, we have to keep reminding them you still have to play hard defensively. You just can’t play with your hands now. You have to be smarter than that and both of them adjusted.

“They were both on the bench at the end of the third. They were in my ear,” he added with a laugh. “They wanted back in.”

Maryville stayed close early behind seven of Cade Stocklein’s team-high 14 points in the first quarter. Platte County started slow but still led 11-7 after the opening 8 minutes when Bradley and Mueller took over. Mueller went scoreless until the second quarter but had seven before halftime, while Bradley added five more. The Pirates built a 31-18 halftime lead, and Bradley and Mueller combined for 18 more in the third quarter.

Maryville trailed 53-21 after the third quarter before making up some ground late. Platte County made 24 total field goals with Fulk and Vignery adding four points apiece.

Havemeier put up 13 points in his first career start as the Pirates pulled away in a monster first quarter and enjoyed a running clock late Tuesday night in the first round.

“We are so pleased with Isaac’s development and how far he’s come. He deserves everything he’s getting.”

Fulk hit a pair of 3s and Mueller and senior reserve guard Eli Nelson added one apiece as Chillicothe fell behind 25-13 after the first 8 minutes. The Pirates ended up with seven 3s total and were never threatened despite shooting just two free throws total.

Chillicothe made just 11 field goals total and didn’t score in the fourth quarter. The Hornets were without a double-digit scorer.

Mueller ended up with a team-high 16 points after totaling 11 in the second half, and Havemeier had six in the third quarter, as well. Mueller had two 3s, and Amson and Wahlert added one apiece.

While Trimble and Mueller were returning starters, Havemeier, Bradley and Fulk were in the opening five at forward for what now appears to be the new-look lineup for Hodge this season.