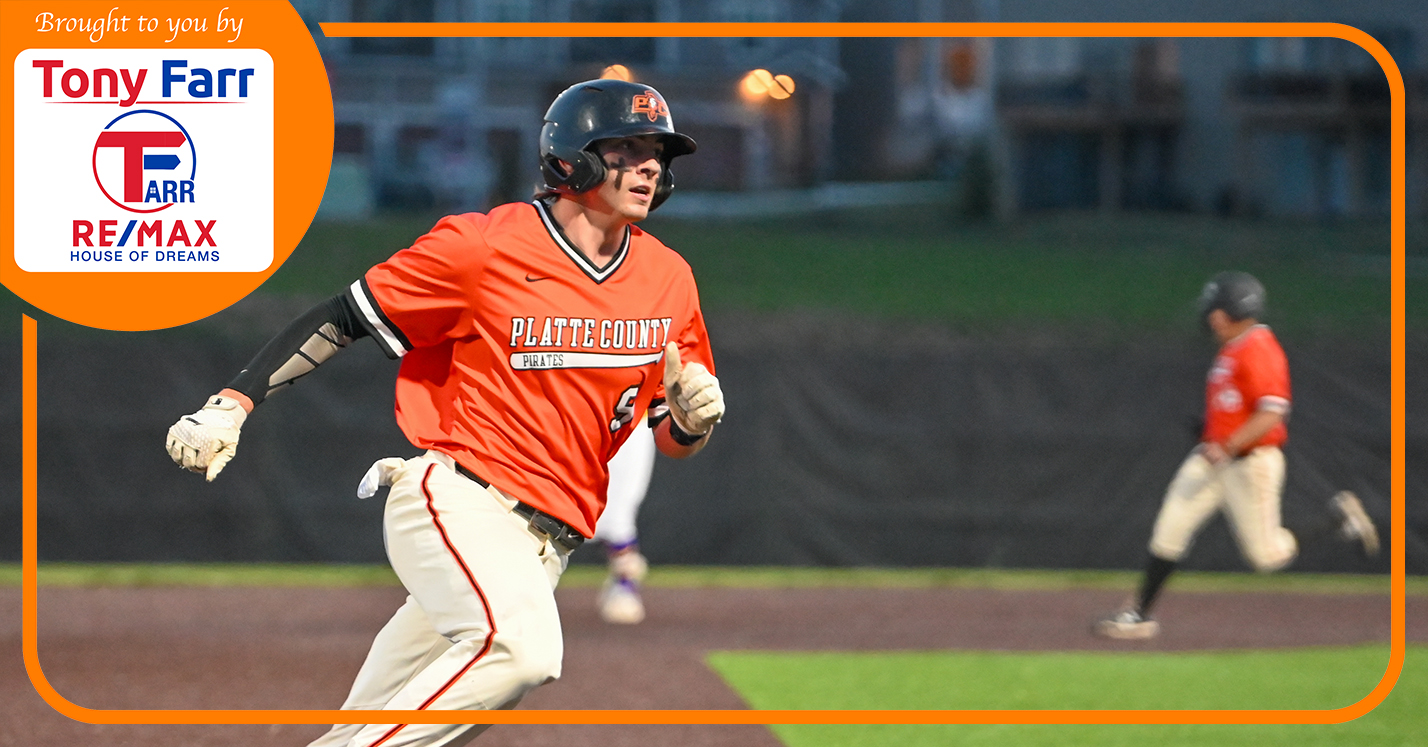 Down to the last out and trailing by two, Platte County not only came up with the offense to force extra innings but also to come away with a critical Suburban Conference Blue Division win.

Kearney led from the second inning until the bottom of the seventh Monday at Creekside Baseball Park. Doubles from sophomore Jeter Mauzey, junior Landon Fulk and finally senior Dayton Mitchell helped Platte County come all the way back for a 4-3 win, finally taking advantage of 12 total hits in the game.

Platte County senior left-hander Jackson McMahan came on for the top of the eighth and struck out three, working around a pair of baserunners. The Pirates then took advantage on walks for junior Ben Spence and senior Cayden Davis as the bottom of the lineup.

Kearney caught Spence stealing, but Davis replaced him at first with one out. Mitchell, the speedy centerfielder hitting leadoff, then roped a double to left field for a double. He watched from second base as Davis came all the way around from first and slid head first into home plate with the winning run.

Davis and Mitchell then ran across the diamond to lead a raucous celebration.

Platte County improved to 6-1 overall and 3-0 in Blue Division play. The Pirates have won five straight since a shutout loss to Park Hill South.

Kearney appeared poised to end the winning streak with two runs against Fulk, who started and struck out five in three innings of work. Platte County came back with a run in the bottom of the fourth on Fulk’s sacrifice fly to score Mauzey after he reached with a leadoff double.

Platte County junior Sawyer Allen relieved Fulk and struck out 10 in four innings of work. However, the Pirates fell behind 3-1 when Kearney came up with a single and two-out RBI double against him in the top of the fifth. The Bulldogs struck out 18 times but made the most of five hits, three walks and two hit by pitch.

Mitchell, Mauzey and Allen each collected two hits for Platte County, which still trailed by two with two outs and junior shortstop Cameron Lewis at third after a one-out triple in the bottom of the seventh. He scored on a passed ball to make it 3-2, and Mauzey followed with his second double.

After Sam Peterson was hit by a pitch, Fulk doubled to center to score Mauzey and tie it 3-3, but Peterson was held at third. Kearney stranded two in scoring position with Allen flying out to right field. Platte County then came away with the win on Davis’ dash home from first in the bottom of the eighth.

Savannah pitchers walked 13 total but only allowed six hits — all singles. The Savages actually led 1-0 after two batters against Allen in the top of the first with two singles and a throwing error on a pickoff attempt in between that put the first runner in scoring position.

Platte County then got out of the inning on a double play and a strikeout.

In the bottom of the first, Savannah walked five and committed an error. Fulk’s RBI single was the only big hit of the inning, while Peterson, Spence and Davis all had run-scoring walks. Platte County sophomore Jake Schwieder had an other RBI walk for the first run in the bottom of the second, and Spence added a run-scoring single.

After a walk for Davis, Mitchell supplied a two-run single to make it 9-1, and Lewis singled home sophomore courtesy runner Garrett Smith.

Platte County put the run rule into play on Lewis’ second RBI single in the bottom of the fourth, again scoring Smith running for Davis after he walked with two outs. Mitchell also walked to bring Lewis to the plate.

Savannah put a runner on second initially in the bottom of the seventh, but the runner was ruled on out appeal for not touching first base.

Pirates freshman outfielder Devin Wassmann hit for the cycle in the second game of the doubleheader to lead a sweep. He finished 4-for-4 with four RBIs and three runs scored out of the No. 3 spot in the lineup.

Platte County again scored five in the bottom of the first with Wassmann tripling home Mitchell and Lewis before an out was recorded to make it 2-0. Spence capped the inning with an unearned run on an RBI double to score Allen after he reached on the Savages’ second error of the inning.

Up 5-0, Platte County increased the lead on Wassmann’s home run to right field leading off the second inning. He then collected the double — his third extra-base hit of the day — with one out in the fourth to make it 7-2.

In the sixth, Lewis walked, Wassmann singled to finish his cycle and Smith walked to load the bases. The Pirates scored three more in the inning on just one more hit — Nick Stone’s one-out RBI single. Wassman came home on Allen’s sacrifice fly, and Smith crossed the plate for the final run on a throwing error by the pitcher on a pickoff attempt.