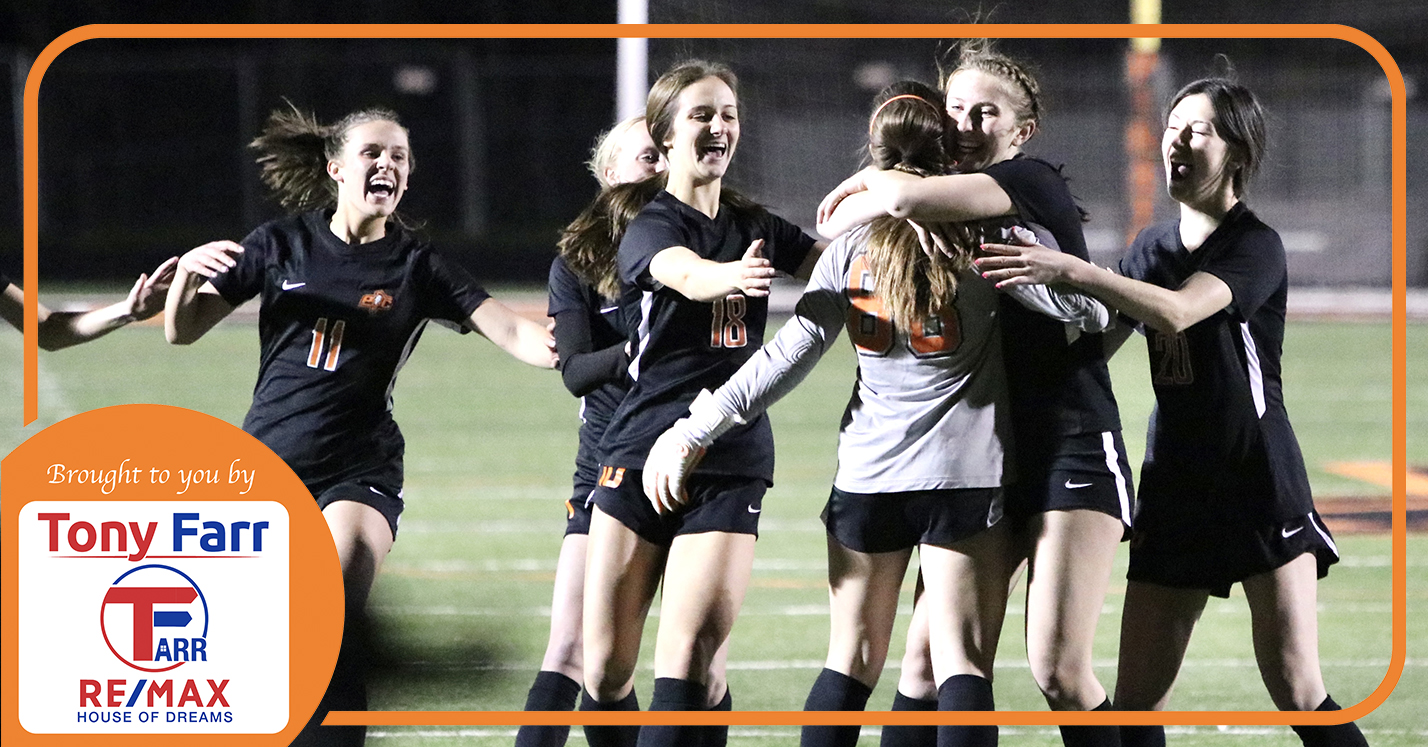 Five straight penalty kicks — one in regulation and the first four of a shootout — skipped past Avery Krahenbill on Monday night.

Platte County’s senior goalkeeper showed no nerves against the biggest shots from the spots despite the prior results. She stepped up and stopped back-to-back penalty kicks, and the Pirates escaped with a 5-4 shootout win over visiting Blue Springs at Pirate Stadium.

Krahenbill calmly stepped to her left on each of the final two tries and stonewalled both attempts.

“I had my spot on every one of those,” said Krahenbill, who made six total saves in regulation and overtime against Blue Springs, which used a 50th minute penalty kick to draw level and eventually force the tiebreaking shootout. “I was going to the right places. I just wasn’t fully committing. Once I got my hands behind it and got my head in the right places, I knew I was going to make those (saves).

“I knew just going in that I could trust my teammates to make theirs, and they could trust me to save them when they needed to.”

Platte County (8-1 overall) went about 570 minutes between goals allowed from the second of Staley’s goals in a 2-0 loss back on March 24 in the Platte County Invitational to the early part of the second half of Monday’s game. The Pirates’ run of holding opponents scoreless included six shutout victories, and they ran the streak to seven straight wins despite conceding the equalizer to Blue Springs.

Late in the first half, Platte County junior Riley Smith staked the Pirates to a 1-0 lead with a right-footed thunderbolt from 30 yards out that ripped into the upper part of the net to beat Blue Springs senior goalkeeper Gabrielle Elliott. They dominated possession and scoring chances from start to finish and might have recorded another clean sheet if not for a handball whistled in the box on a clustered scramble in front of Krahenbill in the 50th minute.

Blue Springs freshman Ella Rowley calmly stepped up to the penalty and placed her right-footed shot in the bottom left corner to just beat a sprawling Krahenbill, who guessed right but couldn’t quite make the save.

Platte County nearly went back ahead in the 58th minute when senior midfielder Kylene Loy pinged the far post with a shot from 19 yards out on the left that just didn’t quite curl enough.

In the 69th minute, Loy’s pass opened up space for sophomore forward Sloan Kassen on the right. Kassen’s resulting cross found Smith for a sliding shot from 16 yards out with Elliott coolly holding the shot for one of her nine saves. That started a flurry of back-and-forth action with Krahenbill making a comfortable save at the other end on one of Blue Springs’ few chances before Smith carved up the Wildcats’ defense with a solo run through the middle that ended when Elliott slid out to make a kick save and deny Smith a potential second goal.

“It’s definitely frustrating some times when you feel like you should have five or six goals on the board, but you just haven’t been able to score,” Platte County junior forward Aleah Dixon said. “But for the most part, defense did their job, and we tried to contribute.”

In the final minute of regulation, Blue Springs earned a free kick in a dangerous spot, and Rowley’s effort careened dangerously toward the net. Krahenbill tracked the shot and jumped to make a save attempt with the ball banging off the football goalpost behind the crossbar just seconds before the end of regulation.

“Barely got a finger on that one,” Krahenbill said.

But did Krahenbill keep the shot out with her leaping effort?

In an opening salvo of the first 10-minute overtime half, Elliott wiped out a cross attempt from Platte County junior forward Hannah Stone, and in the 87th minute, Kassen misfired with a left-footed near-post shot that could have been the golden goal winner.

Krahenbill then came up with a pair of saves on free kicks in the final moments of each overtime half as the action and chances slowed. Both appeared to cause some nervy moments in the sudden-death scenario.

“Especially on that one on the very end of the first overtime,” she said. “Coming up over my head, I really had to stretch out to grab that, that ball. They had a girl pressure me real hard, you know. She took me down; I got the foul, just held on to the ball.”

That led to the penalty kick shootout with Blue Springs seemingly at an advantage with Elliott, an athletic senior captain in goal.

Platte County senior Emma Murray took the first attempt in the south end of the stadium and slotted home. The Pirates then took 2-1 and 3-2 leads with sophomore midfielder Mackenzie Shields and senior midfielder Allie Corbin converting from the spot.

Blue Springs leveled again at 3-3, and Elliott then took a moment with her coach before the fourth round of the shutout to discuss a possible injury. She stayed in the game despite being offered a substitute and then promptly denied Platte County senior Abbey Rolofson’s try. The Wildcats then took a 4-3 lead with Elliott in position to earn the win if she could make another save.

Instead, Smith confidently stepped up and went low to tie the score, and Krahenbill, tending goal in her first career shootout, didn’t have to take but a half step to stop the shot of Blue Springs senior CJ Cowick, who didn’t put her shot far enough to the goalkeeper’s left, and tied at 4-4 the shootout went to additional rounds.

After a short break, Platte County sent Dixon to the spot, and her shot to the right of Elliott hit the back of the net.

“So I volunteered, but I didn’t step up initially because I was a little bit doubtful,” Dixon said. “But I told myself on the side once we were going through the first five, I’m going to step up if there is another five that needs to go up because I do, in the end, try and trust myself with scoring.”

Krahenbill then watched Blue Springs freshman Olivia McCoil as she stood over the ball before her shot, needing another successful PK to extend the match

“I tell the girls in practice: At this age, don’t look where you’re not going to kick,'” Krahenbill said of stopping the shot before running toward her onrushing teammates for a jubilant celebration normally reserved for postseason victories. “She was just staring down that right side, and I trusted my gut. I said, ‘We’re going left.’ I took a step to my right to make that left side look bigger. I went with it, and it paid off.”

Platte County controlled the ball early in the first half but found chances tough to create until Dixon used a left-footed shot from a tight angle on the left to rattle the outside of the near post in the 18th minute. Smith’s superlative strike for the opening goal came nine minutes later and seemingly materialized out of nothing with Corbin earning an assist.

Out of halftime, Platte County seemingly doubled its lead in the 42nd minute. Stone’s cross from the left set Smith up for a sliding tap-in to an open net with Elliott having come off the line to try and cut the pass off. Instead, the assistant referee ruled Stone had wandered offside on the give-and-go pass from Dixon just prior in the buildup.

Blue Springs’ penalty kick opportunity and subsequent goal then came completely against the run of play and forced Platte County to respond.

“I think we definitely didn’t know how to handle at first just because we’ve been used to being able to stay primarily on the opposite end of the field,” Dixon said. “I think overall we were able to try and stay behind it and keep pressing forward despite getting some more pressure on (our) goal.”

Platte County hosts Ruskin on Tuesday and Smithville on Thursday in back-to-back Suburban Conference Blue Division games. The Pirates enter with a 3-0 record in league play.

The Pirates scored early and often in its most recent Blue Division win Thursday at Pirate Stadium after a weeklong layoff.

Dixon put up a pair of goals in the second half to increase Platte County’s lead to 6-0, and Kassen tallied the final marker on an assist from Corbin in the 72nd minute. Six different players scored for the Pirates, who put 16 shots on target overall.

Platte County took a 1-0 lead in the first minute on a pass from Smith to Stone for the opening goal. Pirates junior Haley Brunner tallied her goal on an assist from Dixon to double the lead 19th minute, and a minute later, Smith scored on a rebound of her own saved penalty kick to make it 3-0.

In the 37th minute, a cross from Loy set up Platte County freshman Carmen Gentilia for a tap-in to make the score 4-0 at halftime. Dixon tallied her goals in the 57th and 64th minutes — the second on a cross from Stone.

The Pirates’ sixth straight shutout victory came Friday on the road in Independence.

Scoreless at halftime, Platte County opened the scoring in the 45th minute on a penalty kick from Smith, giving her a goal in a sixth consecutive game in a streak that increased to seven vs. Blue Springs. The Pirates added an insurance goal in the 57th minute on Rolofson’s pass to set up Loy for a goal.

Neece and Krahenbill combined for nine saves for Platte County.