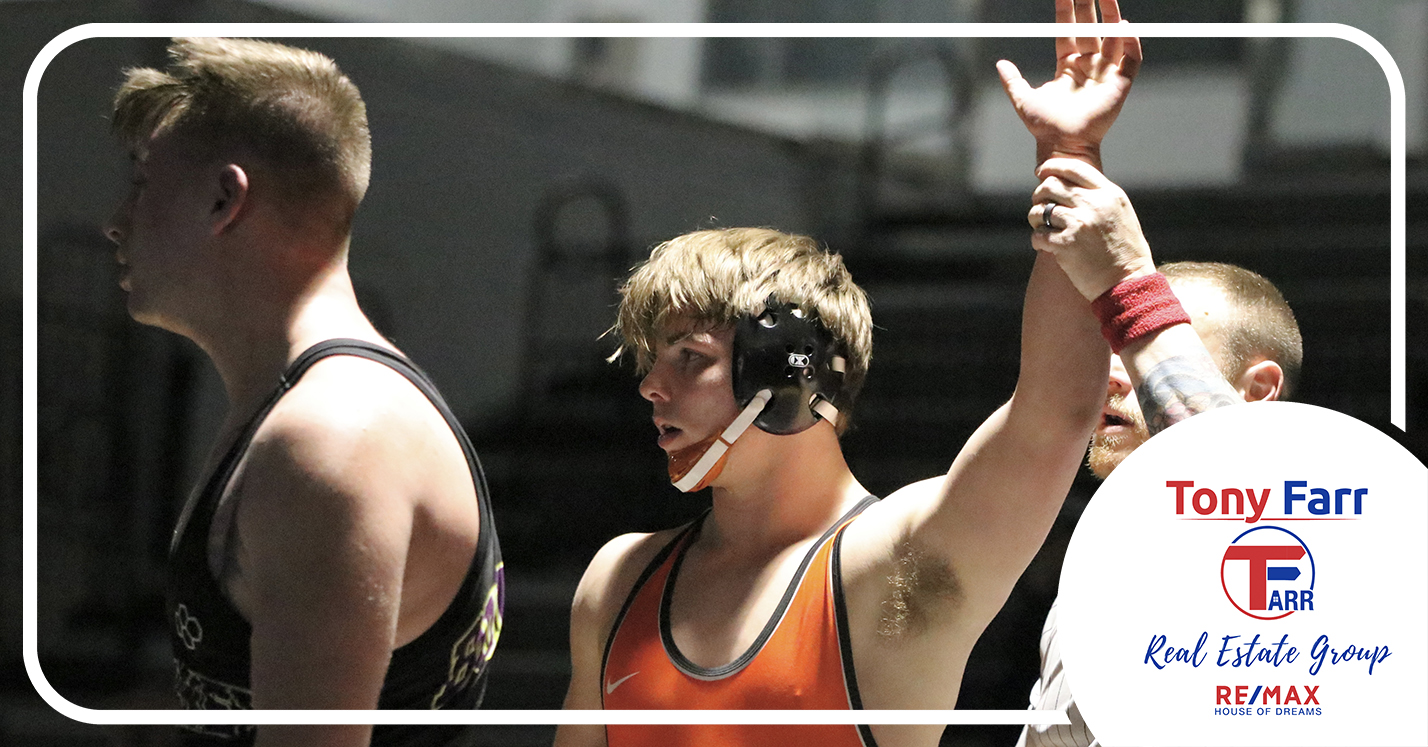 Platte County sophomore Jake Fernandez has his hand raised after a victory over Kearney senior Zach Olson in the 220-pound match of a dual Tuesday at Kearney High School. ROSS MARTIN/PC Preps Extra

Kearney cinched a decisive dual between the rivals after just eight matches Tuesday night and went on to a 51-27 victory at Kearney High School. Platte County did take four of five individual matches late but needed much more while again shorthanded due to injuries. The run included a pin for Fernandez against Bulldogs senior Zach Olson at 220 pounds, leveling the season series between the two at a key moment with the postseason approaching.

Having trailed into the late stages of the first meeting, Olson pinned Fernandez in the 220 seventh-place match at KC Stampede back in December and could have locked up seeding criteria for the upcoming Class 3 District 4 tournament with another win in the rematch.

“Boy, Fernandez a big win,” Platte County coach Reggie Burress said. “He was beating the kid at Stampede and got caught and pinned. Come back and get the pin, that evens the district seeding up. Just those little things.”

After a tight loss to Smithville earlier in the month, Platte County (6-2, 4-2 Blue Division) needed to upset Kearney to force a three-way split between the teams for the conference title. Kearney had already beaten Smithville and ended up taking the crown outright, unseating the Pirates as defending champions.

Platte County wrestled without sophomore Brody Lueders (appendectomy) at 126, senior three-time Class 3 state medalist Eli Rocha (ankle) at 138 and first-year senior Trevor Scott (shoulder) at 182. The matchups would not have been overly favorable even with a full lineup but upped the difficulty level. Kearney took advantage with wins by fall in the first five and seven of the first eight matches to take an insurmountable 42-3 lead. Daryn Langford, a senior returning state qualifier for the Bulldogs, sealed the victory with a pin of junior Bryan Jennings at 152.

“We’ve been shorthanded all year,” Burress said. “We just didn’t have enough of those (contributions) tonight to offset where we’re at right now.”

Foregoing any lineup moves to try and potentially sway the final result, Burress opened with sophomore returning state qualifier Caden Hulett at 106 against Kearney freshman Ryder Shelton, ranked No. 1 in Class 3 according to Missouri Wrestling. Hulett took the match’s first meaningful shot and ended up too deep, and Shelton took advantage with a takedown to his back before earning the first-period fall.

The two could potentially meet again at districts in a semifinal or final depending on how the seeding shakes out.

Kearney’s Ethan McMullen (113), Brennen Greene (120) and Blaine Turpin (126) followed with pins agains the most inexperienced part of Platte County’s lineup. The dual turned again at 132 when Pirates freshman Evan Maccuish leading at point of his match with senior Trenden Rogers. Maccuish, just back after being out due to illness, appeared in position to at least save some points before being turned and pinned late in the third quarter.

“We talked about (saving points) before hand,” Burress said. “Some of the guys are so inexperienced at this level, they don’t know yet when they’re in trouble. So hopefully, if they wrestle in the spring and summer, we will see some good things happen for them.

Platte County junior Draiden Chilcoat brought some life back. He overcame an early deficit to score a 6-3 decision at 138 over Jadon Freestone to make it 30-3, but two standout seniors followed for Kearney. First, Eli Ashcroft, a three-time defending state champion, came up with a pin of Pirates’ senior Jared Parsons, a 2020 state qualifier. Parsons managed some early scrambles to avoid early points but did not make it out of the first period.

Platte County’s best run of the night started with senior Ben McDaniel at 160, pinning Gary Jacobs. Pirates senior Blaine Keuhn, a two-time state qualifier and returning state medalist, did the same at 170 against Eli Helberg. Kearney book up the run at 182 with senior Christian Yocklin filling in for Scott, who expects to have that weight in the postseason.

Yocklin hung in for much of his match, but Jak Gist ended up with the pin to make it 48-15.

Platte County senior Jaydon Walls, a two-time state qualifier and returning third-place finisher a year ago, made quick work of overmatch Tucker Black at 195 to set up perhaps the night’s most intriguing matchup.

“The ones we need to score points at state took care of business,” Burress said.

Despite the earlier win, Olson currently ranks No. 6 at 220 with Fernandez bolting back up to No. 2 after a solid recent run.

However, Olson held Fernandez in the down position for the entire second period, sending the match to the final 2 minutes scoreless. Fernandez also controlled from the top position and eventually turned Olson for a pin and would have had at least an initial 3-0 lead to work with if he hadn’t recorded the fall.

“He did a great job on top,” Burress said. “He stayed patient and didn’t quit trying to return him, and good things happened.”

Kearney sophomore Jase Jackson closed the night with a 4-1 decision over Platte County junior Mar’Quese Brown, who gave up both of the match’s takedowns including a late two points to seal it. Brown’s lone point came on an escape.

Platte County closes its dual season Thursday at Blue Springs, and the district tournament will be next weekend with the postseason format returning to traditional form. The top four individuals at each weight class in the 16-team field will advance straight to state.

Still minus Lueders and Rocha on Saturday, Platte County lost two more injured wrestlers for precautionary reasons and faded to fifth in the 10-team field at Blue Springs South High School. The Pirates did not have an individual champion and came in well back of runaway champion Pleasant Hill, behind Lee’s Summit North, Oak Grove and Cabot but clearly ahead of the tournament’s next tier of teams.

Walls and Fernandez closed the day with frustrating losses to familiar opponents with titles on the line.

After winning all four of his pool matches plus the quarterfinal and semifinal by first period fall, Walls met up with Oak Grove senior Zander Brinegar, a three-time Class 2 state medalist, in the 195 final. Brinegar scored a first period takedown with 22 seconds on the clock and held Walls down from there to build a 2-0 lead. With Brinegar taking bottom to start the second, Walls rode him out for 2 full minutes with the deficit still in place going to the third.

Brinegar picked up a pair of restart cautions on top in the third, and Walls escaped with 1 minutes, 29 seconds on the clock to pull within one. However, neither wrestler scored in the remained, and Brinegar held on for a 2-1 decision. He won the 195 final of the Platte County Invitational between the two a week earlier in a 7-2 decision after giving up the early takedown to Walls but taking him to his back for a decisive five-point move in the third period.

Fernandez saw a lengthy winning streak come to an end against Park Hill South senior Lucas Oitker, currently ranked No. 2 at 220 in Class 4.

The two met during a dual earlier this season with Oitker pinning Fernandez in the closing seconds of the second quarter after building a big lead. The scenario was similar this time with Oitker getting the pin at the 2:00 mark at the end of the first period.

Fernandez and Oitker both had three first-period pins before meeting in the final match of the round robin.

At 106, Hulett had three pins to go into the final round unbeaten to face off against Pleasant Hill freshman Aiden Minor, currently ranked No. 6 in Class 2. Hulett took an initial 2-0 lead but gave up an escape and takedown after picking up a stall warning midway through the first period.

Minor expanded his lead to 6-2 with an escape and takedown to start the second period.

Down 6-3 going to the third period, Hulett tied the match with an escape and takedown with 1:03 to go. Minor’s winning point came on an escape 13 seconds later, and neither wrestler scored in the final 50 seconds.

With the top four in each pool advancing to the championship bracket, McDaniel finished second in Pool A after a loss by fall to Pleasant Hill senior Zach Redwine. McDaniel then lost 5-1 to Lee’s Summit North sophomore Jackson Jones in the semifinal, and he went on to claim the championship. In the third-place match, McDaniel had both of the takedowns in a 4-3 decision victory over Cabot junior Joshua Mercado (41-9).

All three of Mercado’s points came on escapes.

Keuhn followed a similar path with a loss by fall to Pleasant Hill sophomore Brayden Bush in Pool B at 170. He then reached the semifinals but lost a 12-1 major decision to Cabot senior Cole Eason, who went on to lose to Bush in the championship bout.

In the third-place match, Keuhn recorded one takedown in each period of a 6-2 decision over Lee’s Summit North junior Jimmy McGovern, who had two escapes but didn’t get away in the final 1:23 of the third period.

Jennings was runnerup in Pool B at 152 but trailed Park Hill South junior Kavan Slater 14-4 in the quarterfinals before a takedown led to a third period fall. After a loss to Pleasant Hill senior Ryan Volland, Jennings lost a 5-1 decision to Oak Grove junior Alex Whitehead in the third-place match.

Maccuish went 0-3 in his pool at 132 and took a No. 4 seed into the championship bracket, which consisted of all eight competitors. After a loss to Cabot junior Christopher Dye, who finished as runnerup, Maccuish avenged an earlier loss to Oak Grove freshman Rudy Whitehead with a 2-1 decision in the consolation semifinals and then avenged another prior loss with a 1-0 win over Lee’s Summit North JV sophomore Adrian Hale.

Chilcoat, entered as JV for Platte County actually placed fourth in the bracket. He finished third in Pool B and won a 1-0 decision over Whitehead to reach the semifinals before also losing to Dye. He lost to Lee’s Summit North senior Ryan McNeel 7-1 in the third-place match.

Platte County also pulled Parsons (145) and Scott (182) due to lingering shoulder issues during Friday’s portion of the tournament and medically forfeited their matches. With Parsons out, Pirates junior Peyton Nickell went 1-2 in Pool A to qualify for the championship bracket third. He then topped Rockhurst sophomore Robert Purcell 9-2 in the opening roundd before losing the third-place match and finishing fourth overall.