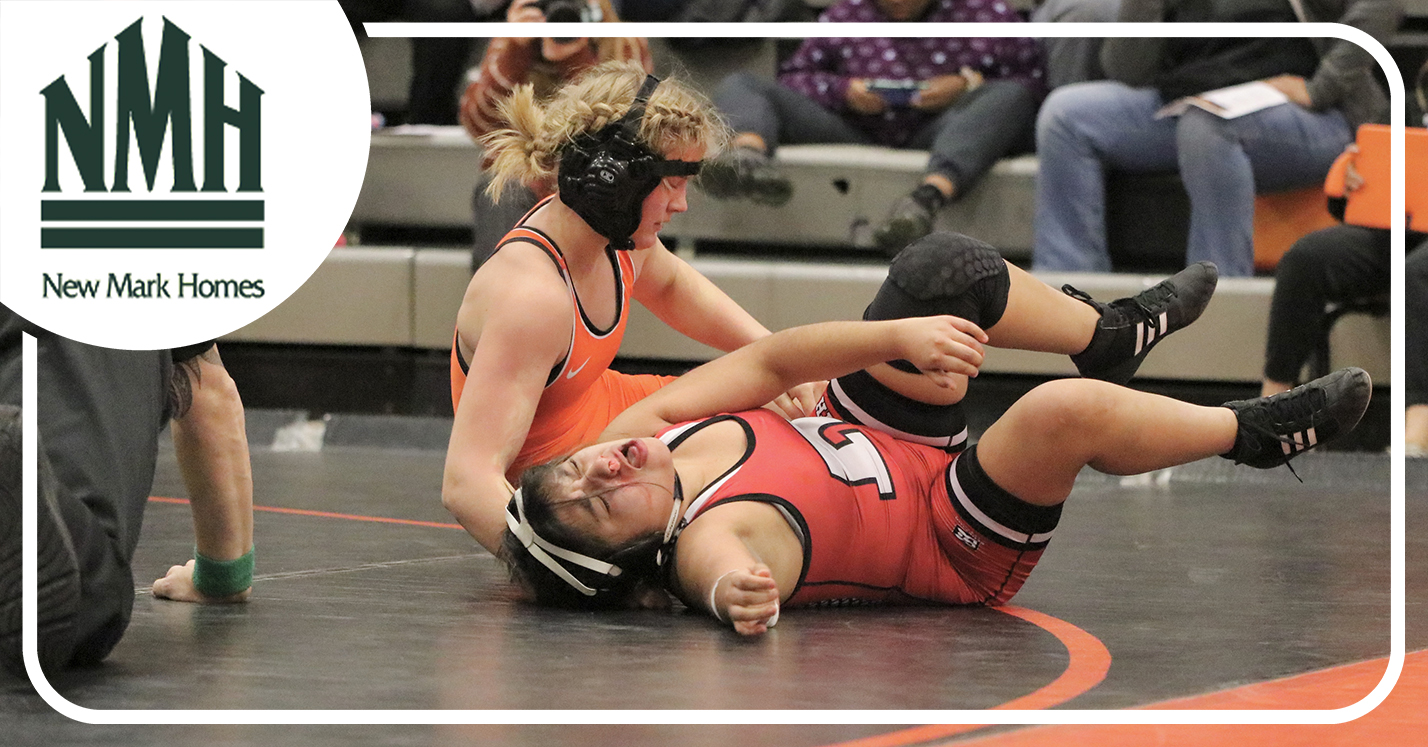 Geddes off to unbeaten start after transitioning from manager to wrestler

The numbers finally played out in a beneficial manner.

Platte County displayed its new-found depth in Monday’s season-opening duals with a pair of conference victories over shorthanded Raytown South and Ruskin. The Pirates’ lineup with flush with new faces prevailed despite a disadvantage in head-to-head wins because the open weights were overwhelmingly in their favor.

In the opener, Platte County topped Ruskin 54-18 in the opener and then closed with a 48-18 win over Raytown South. The Pirates benefitted from forfeit after forfeit in the lone weights, winning only two of six head-to-head matchups.

“I think we have a lot better chance because of how many girls we’ve gained,” Platte County senior Victoria Geddes said. “We’ve gained like five, six girls. We’re a lot closer to a full team now, and that’s super exciting.”

Wrestling at 141 pounds, Geddes represents a unique look into a growing program in just its fourth years. She previously served as a manager, learning mat side before entering offseason workouts and making the jump to the active roster with her cousin and junior 135-pounder Audrey Call.

Geddes took an open against Ruskin then made her home debut against Raytown South’s Daisy Rocha-Gonzalez, who ended up bloodied in the face and behind in the first period. She faced a 6-3 deficit entering the second after allowing three takedowns.

Geddes added the fourth takedown in the second period, cradled Rocha-Gonzalez to her back and scored the fall in 2 minutes, 49 seconds.

“I think I’ve gotten a lot better just in like the first month or so,” said Geddes, a perfect 4-0 on the young season. “It’s super fun. I’m really excited to see the rest of the season.”

Platte County enters the season with a first-year senior, junior and two sophomores in Geddes, Hannah Mand, EmmaLyn Burnett and Sarah Humburg plus six freshmen. They join three-time state qualifier, two-time state medalist and 2021 state finalist KayLyn Munn and returning starters in senior Elizabeth Humburg, and juniors Haley Burge and Call. Overall, the Pirates have 14 on the roster, the most in program history by a wide margin.

Of the returners, only Munn had a match, pinning Ruskin’s Reyna Salvador in just 18 seconds in the first 194 match before taking a forfeit against Raytown South. Munn recently moved to No. 1 in the latest Missouri Wrestling rankings at her weight after previously being behind junior Catherine Dutton of Springfield Central. Dutton topped Munn in last year’s 195 state final but has moved up to the 235 weight class and now ranks No. 1 there.

“She’s a great example,” Geddes said. “She’s super tough and always tries no matter how hard the match is. She’s always going to give her all.”

Platte County’s freshmen received the most opportunities with Alivia Juarez (174) and Maggie Assel (235) losing matches against Ruskin. Juarez (174), Assel (235) and Caitlyn Roudebush (149) dropped matches against Raytown South. However, the Pirates led 48-6 when Juarez came to the mat in the first dual and were up 42-0 over the Cardinals when Roudebush wrestled and lost by fall at 149.

Now with two competitions completed, Platte County faces its biggest test for a growing roster this weekend in the Council Bluffs Classic in Iowa.

No team scores were kept in the seven-team field Friday night at Park Hill High School in Kansas City but produced nine top-four finishes with multiple wrestlers from the same school able to compete in the same weight class as warranted.

In the 194 bracket, Munn claimed a five wrestler round robin with three first-period pins and another that came in 3:35 against Fort Osage’s Taylor Hillbrand. Geddes scored falls in the first period over Smithville’s Skyler Ross and Park Hill’s Jaeda Stroud that lasted a combined 3:30.

Call also didn’t go out of the first period with four pins at 135, which included wins in 11 and 19 seconds.

Making her debut, Sarah Humburg won both of her pool matches at 125 but lost to Fort Osage’s Aroma Marrufo in the final. Similarly, Elizabeth Humburg scored falls in all three of her pool matches but faced off with No. 1-ranked Taryn Johnson in the 130 championship bout. Johnson won by fall in 1:43.

Burge lost to top-ranked Angelina Vargas of Park Hill in pool competition at 115 and wrestled for third, losing by fall to Smithville’s Sophia Boone to place fourth. Mand also went 1-2 at 120 and finished third in a round robin, while Burnett gave the Pirates a second placer at 130 with a 3-1 record. She lost to Johnson in pool competition but came back to pin Cameron’s Amanda Jefferson in 3:38 to claim third — one spot behind teammate Elizabeth Humburg.

At 235, Assel finished fourth but did not win a match in her first live competition.

Platte County originally planned to participate in a tournament a week earlier against Oak Park but due to space constraints the field ended up narrowed. The Pirates were one of the teams cut and instead waited an extra week to begin.