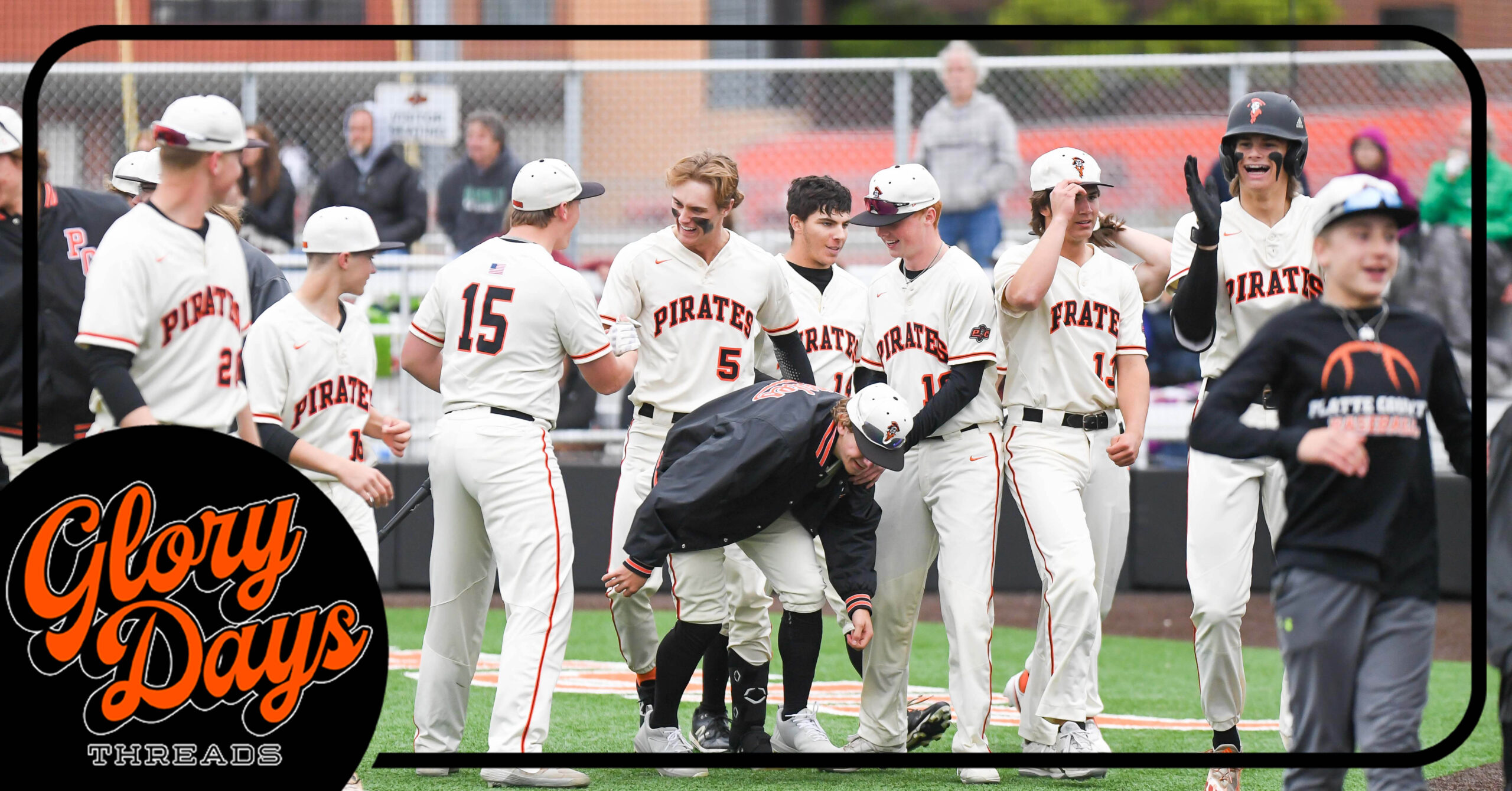 Platte County’s senior right fielder fouled off three pitches deep into what ended up a full count then lashed a ball in between Smithville’s first and second basemen. He saw Warriors right fielder Sam Wornson misplay the bounding ball but immediately knew where to go.

After awkwardly but unnecessarily making sure to touch first base, Wimberly removed his helmet and went to find his teammates for a well-earned celebration Tuesday at Platte County High School. His walkoff single to score Lewis delivered not only a 3-2 win nine innings — Platte County’s second of the kind this season against Smithville — but also locked up at least a share of the Suburban Conference Blue Division title.

Wimberly finished the day just 1-for-5 out of the leadoff spot but came up clutch in the biggest moment.

“I knew that I was struggling today, going 0-for-4 before that, but I had confidence in myself that I was going to get a hit,” said Wimberly, who started the season in a reserve role but has earned steady starts in the outfield as the season progressed. “I was visualizing it in my head. I knew as soon as I saw that fastball I was swinging.”

Platte County (19-8) overcame a pair of one-run deficits with senior left fielder Landon Fulk hitting a tying solo home run in the bottom of the seventh to force extra innings. The Pirates then went through a series of strategic moves that left them without any position players on the bench and needed scoreless relief innings from junior Tyler Erickson in the eighth and senior Kole Jenks in the ninth to keep the game tied.

Smithville managed a pair of runs on just four hits against senior starter Sawyer Allen, who retired 13 straight at one point and finished with eight strikeouts and no walks in 5 2/3 innings.

Both teams scored single runs in the first inning, but Platte County missed multiple opportunities to take the lead. This included stranding two in the bottom of the second, not advancing a leadoff walk past second base in the fourth and leaving Lewis at second after a one-out single in the fifth.

“I stayed confident in us because I knew what we could do,” Wimberly said.

Smithville broke through against Allen in the top of the sixth.

Andrew Hedgecorth singled with two outs and stole second base, scoring on junior star Ryker Edwards’ single. That forced Allen from the game and brought in sophomore breakout lefty Brayden Carter, who escaped the inning with the Warriors only ahead 2-1 and worked around a one-out single in the seventh.

After leaving another runner stranded in the bottom of the sixth, Platte County came to bat in the seventh needing at least one run to keep the game alive. Edwards, mostly known as a centerfielder, started on the mound and looked on the verge of earning the win. Instead, he allowed a leadoff single to junior James Schwieder, and Smithville went to the bullpen.

However, Platte County junior pinch-runner Dylan Zimmerman ended up picked off with Fulk at the plate. Two pitches later with the count 3-1, Fulk socked a home run to left field — the first of his career to dramatically tie the score.

“It was fantastic,” Platte County coach John Sipes said of Fulk, tops among regulars in batting average (.438) and on-base percentage (.538) this season. “Landon has been there all year for us. He’s been a vocal leader and led by example on the field. He’s just coming into his own right now and timed that perfectly.”

Lewis, who went 2-for-3 in the No. 9 spot, singled and went to third after stealing second and advancing another base thanks to an error on the throw down.

Smithville extended the game after inducing a groundout to first base from sophomore center fielder Devin Wassmann. Sipes went to Erickson in the eighth, and he allowed a walk with one out. Edwards came to the plate with the runner at second, and this time, the Pirates opted to walk him. The move worked, and Wornson lined out to Fulk, who made a late adjustment to end up with a diving catch near the foul line.

In the bottom of the eighth, Platte County junior third baseman Nick Baker appeared to reach on a hit by pitch, only for the umpire to order him back to the box after ruling he did not make an attempt to move out of the way. He ended up striking out, but junior Dylan Robertson, who went 2-for-2 with a walk and an RBI, singled to put the potential winning run on base.

Robertson advanced to second on a wild pitch, and Sipes decided to run senior Ben Spence while further depleting the bench. He went to third on a groundout, but Smithville opted to intentionally walk senior designated hitter Eli Nelson because it brought Erickson to the plate. He only had two at-bats this season, both incidentally in the first extra-inning game with the Warriors.

Sipes again went to his bench to bring in junior catcher Cameron Dean, who appeared to reach on a walk only to return to the box after the seemingly low pitch was called a strike. He ended up flying out to left field, and he ended up being forced to play first base in the ninth — a position he apparently has never played.

“I literally used every position player we had so it was coming down to pitchers were going to have to hit,” Sipes said. “It wasn’t looking too bright, but luckily, we found a way to get it done.”

With Erickson out, Jenks came on in the ninth and quickly induced a pair of groundouts back to him. He chose to run the ball all the way to first base on the first one rather than utilize Dean but tossed to his emergency defender on the second.

Smithville put a runner Ron with a single, but Jenks followed with a three-pitch strikeout. He came off the mound with an animated pump of his arm, having come back from allowing three runs — including the one to tie the game in the bottom of the sixth of the first meeting between the two teams.

“It’s huge for us,” Sipes said. “Last time in this situation against Smithville, we felt like Kole got a little nervous and let his emotions get the better of him. This time he took advantage of that and used it as fuel for his fire.”

Already a potential hero, Fulk popped out to start the bottom of the ninth, before Lewis walked on four pitches. Then came another nervy moment when he broke for second base late on a ball the catcher blocked.

Lewis evasively slid into second, and the field umpire paused for an agonizingly long moment before ruling him safe.

“He was safe. I called it from the beginning. I don’t know why they were arguing. It was pretty clear to me,” Wimberly said.

With the count 2-0, Wimberly eventually reached 3-1 before fouling off three straight ahead of his winning hit, which did not include an RBI due to the error.

No matter. Platte County knew the stakes and improved to 11-1 in Blue Division play, meaning Kearney will have to win out to earn a tie atop the standings. Smithville and Kearney have a game scheduled for Monday that should ultimately determine if the Pirates take the crown outright or share with the Bulldogs.

The win could also lock up the top seed in the Class 5 District 8 tournament, meaning Platte County would only have to beat either Kearney or Smithville on a likely path to the playoffs rather than potentially both.

“It felt amazing. One of the best feelings of my life so far,” Wimberly said. “Just celebrate tonight, but at midnight, it’s over and on to the next.”

Platte County won the first meeting with Smithville in what ended up being a key result, losing a 7-1 lead but scoring two in the top of the ninth after Edwards was ejected in the previous half inning for throwing his bat after a strikeout.

The second meeting looked to remain close from the outset.

“It’s just that we’ve come to expect of him,” said of Allen, who has peaked down the stretch starting with a six-inning perfect game against Winnetonka two weeks ago. “Turn the page and have another outing. I told him before the game, ‘You’re going to give up a hit, guys; you’re going to give up runs; you may have an error.’ It’s how you respond to that, and he responded perfectly.”

Platte County answered right back against Edwards in the bottom of the first. He hit Wassmann with a pitch and walked Baker after the initial runner went to third on a steal and passed ball. Robertson scored Wassmann with a sacrifice fly. The Pirates ended up with eight hits — seven singles and Fulk’s home run — plus five walks.