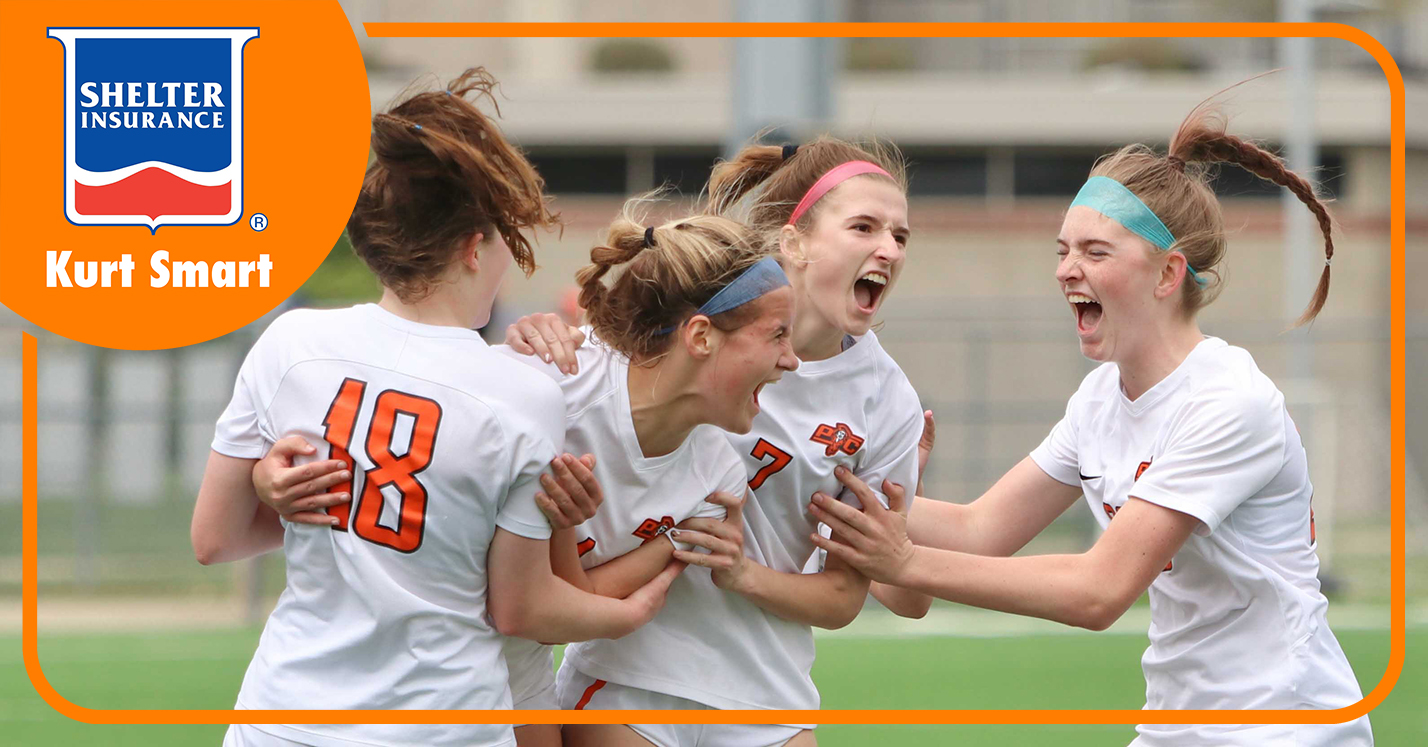 Platte County freshman Giada Cucchiara lightly chipped the ball with her left foot and found a wide open teammate in the middle of the box.

Lily Kytasaari calmly settled the ball, knowing the stakes but also not attempting to do too much in the moment. The Pirates freshman forward calmly slotted a shot with her right foot for what ended up the game-winning goal in a 3-2 comeback victory over Suburban Conference Blue Division rival Smithville in Saturday’s North Kansas City Tournament championship game at North Kansas City District Activities Complex.

Platte County overcame a 2-1 deficit while playing into a stiff wind with occasionally brutal gusts in what could have been a catastrophic second half, thanks to the steely nerves of Kytasaari in the 76th minute of a tie game.

“I didn’t want to dribble in and get taken by the goalie; I didn’t want to just take a one-hit shot and make it go over,” Kytasaari said. “I just wanted an easy placement.”

Platte County led 1-0 on an early first half penalty kick from senior star attacking midfielder Riley Smith but fell behind after allowing a pair of goals in the first five minutes after halftime. Smith quickly equalized in the 48th minutes, and the Pirates, specifically freshman Finley Kaser, continued to bunker in on defense against a wind-fueled attack.

While hindered in ability to push up in attack, Platte County (14-2) impressively made the most of limited quality chances to dramatically reverse the result of a 1-0 loss to Smithville just eight days earlier in conference play.

“I say it all the time. Against good teams we may not get those chances,” Platte County coach Ashlyn Brantley said. “The fact that we finished them makes it even better. It’s always great to see we can stay composed in those situations and stay focused.”

Smithville survived its wind battle in the first half and faced just a one-goal deficit when the field switched. The Warriors then took advantage of a pair of fouls to quickly tie the game and then take the lead in quick succession.

In the 44th minute, the official whistled sophomore centerback Alex Beeman for a foul when she slid in and appeared to cleanly win the ball. Instead, Smithville lined up for a set piece from about 26 yards out, and junior Alayna Edwards directly converted it into a goal with a well-placed shot into the upper left corner. Kaser jumped well to meet the ball but could only tip the shot into the net, unable to redirect the ball over the bar. Edwards scored the game-winner against the Pirates in their first matchup on a similarly placed shot off of a quick restart in overtime of an otherwise scoreless game between the two teams.

Leveled at 1-1, Smithville quickly attacked again, and this time earned a penalty kick when Platte County senior centerback Triton Davey upended an attacker while attempting a clearance. Warriors junior Jessica Baker went low to the left to convert the shot from the spot in the 45th minute, having turned a 1-0 deficit into a one-goal lead in a matter of just 5 minutes of game time.

“We talked about it at halftime,” Brantley said. “We went into the half with a game plan of not fouling in and around our box, and we definitely didn’t do that. That’s definitely not on the calls. We take full responsibility for that.”

Platte County didn’t stay down long and started a trend of attacking down the left flank when opportunities arose.

In the 48th minute, Smith added her second when freshman Lauren Stone found her in the box, and Smith used a nifty left-footed flick to beat Smithville junior goalkeeper Katelyn Burkhart and level the score at 2-2. For nearly the next half hour, the teams battled the conditions, which were so unusual that at one point Pirates junior left back Morgan Stewart took a corner kick that landed near midfield and bounced into her own defensive half before someone played the ball.

The difficulties for Platte County in generating and sustaining an attack made Smith’s crafty equalizer all the more important as time in regulation wound down.

“We had every chance, and every chance we had really we took with the wind coming,” Kytasaari said. “Riley had an amazing two goals — the PK and the first one through the box were just amazing.”

Moments before Kytasaari’s winner, Platte County appeared to have its next best chance foiled when Cucchiara set up sophomore midfielder Addison Bradley at the top of the box. A Smithville defender slid in to block the attempt, and ultimately, Burkhart didn’t face a shot on the attack.

With overtime between the rivals looming again, a pair of freshmen came up big during the third game in three days for both teams.

Platte County sat senior all-state forward Hannah Stone for the entire second half but only rotated through a core group in the key matchup. That meant more time for Lauren Stone and Cucchiara off the bench, and both were instrumental in the second-half goals.

In the 76th minute, Cucchiara popped into open space and angled in toward the box before sending in the short but effective cross. Kytasaari rewarded her accuracy with a well-placed shot that sent her into an animated celebration and earned her exuberant hugs from Smith, Lauren Stone, senior midfielder Paige Chase and junior right back Cosette Stephenson.

“I was just trying to get at like the PK spot because I knew the cross was into the wind,” Kytasaari said. “The wind was coming very strong so I didn’t know where the ball was going to be played. I just saw the cross and lined it up.”

Platte County made the finals of the North Kansas City Tournament for a fourth straight time and has now won the title each of the past three times it was contested (2019, 2021 and 2022). The 2020 season was canceled due to COVID-19. Perhaps more importantly, the Pirates kept hopes alive for the No. 1 seed in Class 3 District 8.

A Smithville win would’ve all but ended that race ahead of the teams’ Blue Division matchup scheduled for this Thursday in Smithville. Assuming Platte County doesn’t stumble against Kearney on Tuesday, the Pirates will have a shot to re-enter the conference title hunt and likely earn the top seed in the looming postseason bracket with a real possibility of four meetings between the rivals this season.

“Each time we see them, and it’s week after week after week now, but this is not the end-all, be-all,” Brantley said. “We want to come out; we want to win each game we play, but we have bigger goals than winning this tournament. We have bigger goals than just beating Smithville. We want to make sure we beat them at the right time in the season, and we’re going to see them again.”

The Pirates earned a return to the tournament title game with a pair of second-half goals in Friday’s semifinal.

Kytasaari set up Smith for the opener in the 50th minute to stake Platte County to a 1-0 lead, and sophomore midfielder Addison Mayne sealed the victory in the 76th minute. Bradley recorded the assist on the second goal.

Kaser made five saves to record the clean sheet.

Despite a high-pressure offense in Thursday’s opening round, Smith’s first half goal ended up standing up as the winner.

Platte County took 33 shots total, but Smith’s unassisted marker in the 12th minute ended up being the lone goal. Kaser came up with eight total saves in what ended up the the second of three straight shutouts for the Pirates to start the week.

A year earlier, Platte County beat William Chrisman in the semifinals on the way to the tournament championship game.

Coming off the previous week’s loss to Smithville, The Pirates returned to the win column in Blue Division play Monday at Pirate Stadium and improved to 6-1 in conference.

Platte County scored four goals in each half, finishing off the mercy-rule win in the 54th minute on the second of two straight goals from junior forward Sloan Kassen. Kytasaari assisted on the second and finished with three total for the Pirates.

Platte County went up 1-0 on Hannah Stone’s opener in the seventh minute on a piece from Kytasaari. Stone then assisted Smith on her first goal in the 14th minute. Grandview’s defense held for the majority of the first half, but Webster scored in the 31st and 33rd minute — the first on a corner kick and freshman reserve forward Rylee Burris springing her into the open on the second.

Up 4-0 going into the second half, Smith put her second in the 44th minute unassisted, and Kytasaari set up senior midfielder Paige Chase to make it 6-0 in the 48th minute.