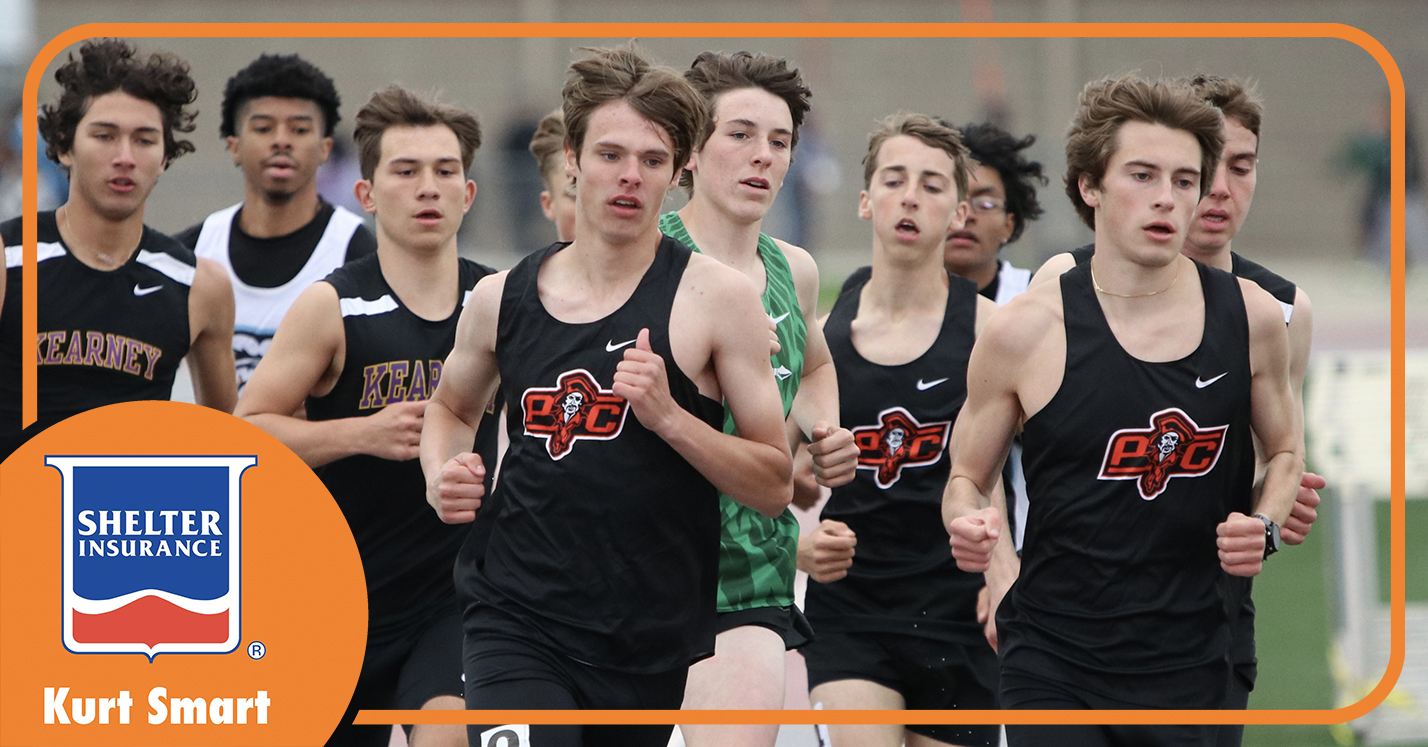 Platte County’s continually developing 1-2 combination in long-distance events have brought out the best in each other during recent weeks. This time around, Early — the established senior — decided to push on in the second half of the race and pull away for a victory and new personal best of 4 minutes, 35.16 seconds.

Currence (4:44.11) and fellow Platte County sophomore Andrew Johnson (4:45.63) came in second and third with two more PRs to give the Pirates maximum points in the event. They ended up with 163 total and came in as a solid runnerup behind champion Kearney 208 while comfortably in front of third-place Smithville (120). This marked a second straight conference runnerup finish.

The 1,600 results built on a solid start from Platte County’s distance team, and the successes continued to the end during a steady downpour.

Early entered the season an individual qualifier for the Class 4 Missouri State Track and Field Championships a year ago in the 3,200 in addition to advancing as part of the 4×800 relay. He might now be focused more on the 1,600 for the postseason after finally breaking below his previous consistent efforts in the event generally ranging from 4:43 to 4:48 over the past two years.

Currence debuted this season with a comfortable sub-5-minute 1,600 and has continued to to improve while trying to find his best race. He earned a conference title in the 800 with a PR of 2:02.96 with McCoy, a member of last year’s 13th-place state 4×800 along with Trimble and Early, fourth at 2:07.15.

Competing in four events, Currence also teamed with juniors Gavin Jenks, Bryan Jennings and Tristan Magnuson for a third-place finish in the 4×400 (3:37.80).

Platte County senior Chandler Steinmeir, who recently returned, scratched out of both hurdle events and both relays due to an injury. He was slated to be part of the 4×400 relay, but Magnuson took the last spot after finishing seventh in the open 400. The Pirates almost assuredly lost points because of his absence and also endured an off day for senior sprinter Victor Sewankambo.

In fact, Platte County senior Trevor Scott bested a pair of teammates in the 100, placing fifth at 11.43, uniquely finishing ahead of Sewankambo in his best race at conference for a second straight year.

Sewankambo, Scott, junior Nate Walls and senior Cole Rhoden did team on Platte County’s 4×100, a state qualifying a unit a year earlier, for a second-place finish behind Grandview. The Pirates posted a 43.92 and were just off their season-best time of 43.91. Scott and Sewankambo were on last year’s school-record 4×100 along with junior Garrett Smith-Dean, no longer on the team this season, and junior Carter Salzman, who continues to deal with a nagging leg injury limiting him to pole vaulting duties at this point.

While struggling in the 100 and 200 but still placing top eight for Platte County in both, Sewankambo came in second in the long jump at 6.46 meters with Rhoden right behind in third at 6.41 meters. Both reached sectionals in the event last year, while Sewankambo advanced on to state but did not medal. The Pirates also added a second-place showing from junior Andrew McClure in the triple jump (12.33 meters) and a fourth-place finish from sophomore Kevin Taylor in the pole vault (3.05 meters).

Platte County’s other top-five field events were from junior Cameron Wolfe in discus (42.95 meters) and senior Brody Fulk in javelin at 43.6 meters, which bettered his previous personal-best by more than 2 meters.

Now the difficulty for Platte County increases in the postseason. Normally, the Suburban Blue served as a preview of the upcoming district meet, but the Pirates moved up this year to Class 5 District 8 and Sectional 4 for the state qualification process and will likely specialize even more than normal in effort to maximize qualifiers for each of the next rounds.

Platte County travels Saturday to the Class 5 District 8 meet Saturday with Early, Trimble, McCoy, Sewankambo, Scott and an injured Salzman the only returning state qualifiers. Only Early competed as an individual last year when the Pirates early a pair of medals with neither of the athletes collecting the honors back this year.