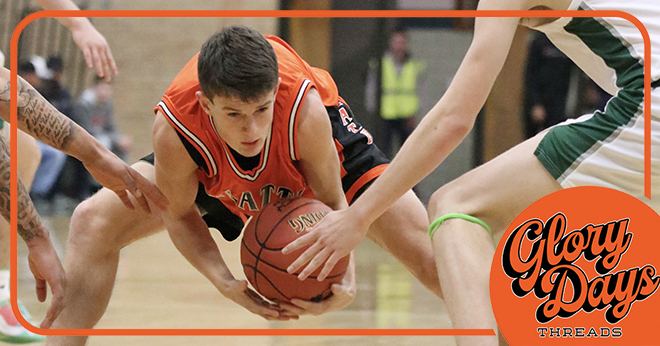 ST. JOSEPH, Mo. — The lead disappeared and eventually turned into what seemed like a manageable deficit.

In the end, Platte County didn’t hit the clutch shots in the second half of a 70-64 loss to Lafayette on Friday night at Lafayette High School. The Pirates entered ranked No. 7 in the Missouri Basketball Coaches Association Class 5 poll but left with an upset loss to a former Class 4 rival that stalled what seemed to be steadily building momentum in another historic season.

Platte County’s nine-game winning streak came to an end against the same team the unbeaten run began against. The Pirates won the previous matchup Lafayette a month earlier in the third-place game of Kearney’s Bulldog Classic, but this time the Irish flustered and frustrated them into losing a 11-point lead and eventually the game ahead of the the season’s biggest three-game stretch.

Now the question becomes whether this loss serves as a wakeup call or a cause for concern as Platte County seeks at least a share of a Suburban Conference Blue Division title in home matchups with Grandview (Tuesday), Ruskin (Friday) and Smithville (next Tuesday). The Pirates currently sit at 8-1 and in sole possession of first place in the league standings but with Ruskin and Smithville essentially one game back, while Grandview has struggled for most of the season but has built a consistently strong program.

“Hopefully, it’s a wake-up call,” Platte County coach Rick Hodge said. “The kids are hanging their heads because they’re competitors, and they want to win and they came up here to win and it didn’t get done tonight, but from a conference or district standpoint, it doesn’t hurt us so hopefully this is one we can learn from and make some corrections and improve as we move forward.

Platte County (17-3) led by as much as 11 in the first half and as much as 10 early in the third quarter. The Pirates finished with senior guards Jarett Mueller (20 points) and Jace Trimble (11 points), junior forward Chandavian Bradley (11 points and senior forward Isaac Havemeier (10 points) in double-figure scoring but couldn’t overcome a debilitating stretch of turnovers and missed shots.

Mueller made just one field goal in the second half after another fast start on offense, and Lafayette closed the game on a 34-18 run.

“They let some of the different things rattle them as far as the hands and grabbing and things like that,” Hodge said. “We kept talking to them on the bench about how to overcome that and what they need to do to handle. We did. But I still feel like usually we’re able to handle that pressure a little bit better and stick some shots, and tonight, we didn’t hit as many.”

However, the final stretch featured some back-and-forth moments.

Platte County senior Brody Fulk hit a 3 from the left wing immediately after Lafayette retook the lead for the first time since late in the first quarter. The first of his two 3s made it 53-51, and his second answered a 3 from Irish senior guard Mikey Thomas, who scored a game-high 24 points, to put Platte County in front 57-56 only for junior forward Camden Bennett (19 points) to come up with another triple. The Pirates would lead only once more.

Mueller drew a foul shooting a 3 for the second time in the game and hit three free throws with 3 minutes, 44 seconds left in regulation to start a 7-2 Platte County run. Bradley’s inside bucket to make it 64-63. Lafayette then added a bucket and went 5-for-9 at the line in the final minute to create some space, while Havemeier and Fulk, who scored all seven of his points in the fourth quarter, missed potential go-ahead 3s and Mueller couldn’t knock down one from the right wing that could have tied the score late.

“We were the ones that let them back in it and let them hang around,” Hodge said. “We weren’t running back on defense. How many runout layups did they get? And you have to give Lafayette credit because they created some turnovers that led to easy buckets, and the easy buckets and the free throws are what kept them in it, kept them around us.”

Lafayette showed glimpses of the high-pressure, physical defense in a near comeback in the first meeting, and the first quarter of the rematch went back and forth.

Platte County trailed 9-6 when Mueller answered with a 3 of his own to tie it, and the Pirates then survived a pair of pair of potential three-point plays when Lafayette missed both free throws. The Irish were up 13-11 and went scoreless for the final 2 minutes of the quarter to provide an opening.

After missing a point-blank shot inside, Platte County junior reserve guard Parker Amos came right back to drain a 3 at around the 1-minute mark for his only bucket that gave the Pirates a 14-13 lead going to the second quarter. The Pirates then started to stretch its lead.

Bradley converted a three-point play on a second chance opportunity off of an offensive early in the second quarter, and Trimble ripped a steal off an apparent Lafayette rebound to make it 19-13 — the biggest for either team to that point. The run would go to 10-0, and Mueller scored nine in the quarter. That included 3s on two straight possessions, the second including a foul drawn on the shot and a four-point play to briefly push the lead to 30-19.

Thomas and Bennett continued to keep Lafayette close with small runs. First the Irish came up with five unanswered before a running floater from Trimble and breakaway dunk for Bradley made it 34-26.

Platte County picked up 11 fouls in the first half on some tight whistles and went into halftime up just 34-29 after a inconsistent play in the final 3 minutes of the first half. Mueller’s final 3 and last field made it 42-33 and came moments after Bradley picked up this third personal foul about 3 minutes into the third quarter.

A big moment seemingly occurred when Lafayette senior guard Drake Davison made a 3 to cut it back to six points, only to pick up a technical foul for words and/or actions after the made shot. Mueller hit both resulting free throws, and Trimble knifed in for a layup off the inbounds pass on the resulting possession to make it 46-36.

That would be the last double-digit advantage with Lafayette going on a lightning quick 9-2 run to force Hodge into a timeout after a turnover resulted in an uncontested layup for Thomas. The Irish would rattle out a potential tying 3, and Bradley came up with an inside bucket after the lead went down to one point.

Bennett then hit a baseline jumper to make it 50-49 going to the fourth quarter and keeping Lafayette on the comeback trail, eventually leading most of the final 8 minutes to earn a 20th straight home win.

“There were things that happened in the second half and especially in the fourth quarter that still need to be cleaned up — the higher percentage shots we’re looking for and trying to get what we want out of the offense” Hodge said. “And there were some shots that didn’t fall for us in the fourth, and they stuck some. That was the difference in the ball game.”

Platte County continues to seek the first back-to-back 20-win seasons since 2004 and 2005, a third Suburban Conference title and the first playoff appearance since 2010. The Pirates earned the top seed in Class 5 District 8 and opens at home Saturday, February 26 against Kansas City East (2-17). The field features eight teams after the state decreased the number of districts in Class 5 from 16 to eight this year.

In 2021, Platte County lost to Kearney in the District 16 championship game and finished 20-6. The defeat followed earning a share of the Blue Division title with Ruskin — the first league crown for the Pirates since 2011.

Back-to-back 3s from Havemeier and Bradley late in the fourth quarter Tuesday at Raytown South High School avoided a similar lost lead scenario for the Pirates in their most recent conference matchup.

Platte County’s win coupled with Smithville’s victory over Ruskin a day later moved the Pirates into first all alone in the Blue Division standings. However, they needed the late offense from Havemeier (13 points) and Bradley (11 points) to survive in their last road conference game of the season. The win made it a season sweep over Raytown South and six straight league wins since a double-overtime loss to Ruskin in early January.

Hodge called a timeout after a runout layup off of a turnover with 3:10 left in regulation. Havemeier hit a 3 from the left wing out of the stoppage, and Bradley added his to push the lead back out to nine points. The Cardinals then took a timeout after the quick six-point surge but couldn’t quell the Pirates’ momentum.

Bradley added an inside bucket, and Havemeier four more points to put Platte County up 63-50. They combined for 12 of the Pirates’ 18 points in the fourth quarter, while Mueller added a 3.

Mueller scored 14 of his team-high 17 in the first half, hitting four 3s, while Trimble added all 12 of his points in the second quarter to push Platte County’s lead to 40-26 at halftime. The duo then went scoreless in the third quarter with Raytown South limiting the Pirates to just five points and nearly closing the gap the whole way. Fulk (seven points), Bradley and Havemeier scored all but three of their 23 second-half points.

Platte County sophomore reserve guard Judah Vignery hit a 3 in the first quarter of the Pirates’ only bench points.