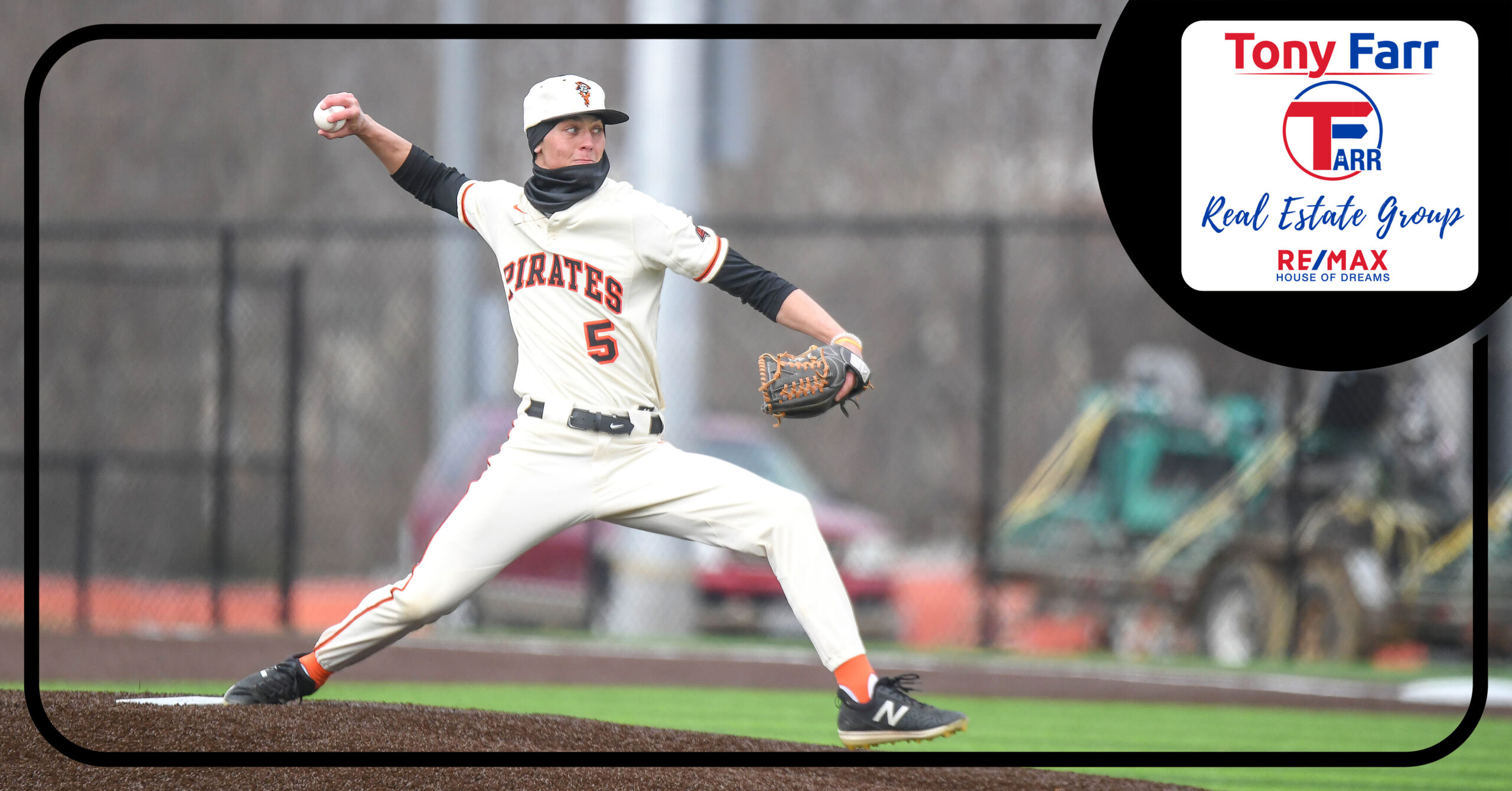 Platte County closed a seemingly endless stretch of crowded schedule with a split of two games in the River City Baseball Festival on Saturday in Lawrence, Kansas. The Pirates continued a trend of showing the potential of a deep roster coupled with a disappointing loss.

After a 5-3 loss to Shawnee Mission Northwest (Kansas), Platte County senior Landon Fulk turned in perhaps the best start of his two-year career in a two-hit, nine-strikeout complete game in a 9-0 victory over Arkansas City (Kansas). Both games were played at Lawrence High School.

Fulk foiled Arkansas City start to finish, retiring the first seven batters he faced before catcher’s interference and a hit batter put two runners on in the bottom of the third. He struck out the next two to escape the minor jam before working around a leadoff walk in the fourth when junior catcher Cameron Dean gunned down the runner attempting to steal second to help his pitcher face the minimum in that frame, as well.

Arkansas City had leadoff singles in both the sixth and the seventh but could not come up with a run.

Platte County provided the only offensive support needed with two runs in the third. Pirates junior outfielder Dayne Wimberly, who finished 2-for-3 with a pair of extra-base hits from the No. 9 spot, led off with a double, and freshman Dayton Doll followed with an RBI single on the next pitch to make it 1-0. He later scored on a sacrifice fly for senior first baseman Sawyer Allen.

The 2-0 lead held until the fifth when Wimberly led off with a triple, and Doll, who went 2-for-3 with a walk, two runs scored and three RBIs, recorded his second RBI with a double to right field. That started what ended up a seven-run inning that also included an RBI single for senior shortstop Cameron Lewis, a two-run single for junior third baseman Nick Baker, an RBI single for senior designated hitter Eli Nelson, a sacrifice fly for Dean and a bases-loaded walk from Doll — all with one out.

With the bases still loaded, Platte County couldn’t push across an eighth run that could’ve resulted in a run-rule victory after five innings.

In the first game of the day, Platte County led 1-0 after the first and was tied 2-2 with Shawnee Mission Northwest after two innings. The Pirates started sophomore Brayden Carter, who threw six-plus shutout innings to beat Liberty North in his recent varsity debut, ended tagged with four runs, only two earned in three innings of work. He impressed again, striking out three and allowing five hits.

After going down in order in the top of the first, Shawnee Mission Northwest opened the second with back-to-back singles and then loaded the bases on an error. Two runs resulted to go ahead 2-1 after Platte County turned a pair of one-out walks for Lewis and sophomore center fielder Devin Wassmann into a run.

Both runners advanced on a passed ball, and Lewis scored when Baker grounded to third with the runner crossing the plate before Wassmann was tagged out trying to advance to third on a fon-forceout play. The Pirates used a pair of errors in the bottom of the second to score another run, and they finished with nine hits but couldn’t come up with a big inning to keep pace.

Shawnee Mission Northwest plated two more in the third against Carter with three straight two-out hits and went up 5-2 with an unearned run against junior reliever Dylan Zimmerman, who went four innings, giving up three hits and issuing one walk while striking out four.

Allen had a one-out double in the third, and Platte County senior catcher Jake Knudsen and Fulk had back-to-back singles to start the fourth but neither situation resulted in a run. Neither did two-out singles for Baker and Nelson in the fifth.

Platte County drew within 5-3 in the sixth when Fulk singled to lead off the frame. He went to second on a passed ball, stole third and came home on another passed ball.

Wassmann tripled to start the seventh but also ended up stranded.

Platte County has 14 players to appear in at least eight games, and 12 have at least 28 plate appearances. The Pirates have continued to split catching duties between Dean and Knudsen, and many others have been deployed both on the mound and in the field. Kole Jenks and junior Tyler Erickson have both pitched in eight games apiece, mostly as relievers, but 20 different pitchers have recorded at least one out.

After a brutal stretch of 21 games in a span of 29 days, Platte County takes a break until a doubleheader Friday against Winnetonka at Platte County High School. The first game between the two scheduled for earlier this season but was postponed and combined into the return date.

The Pirates recorded a pair of shortened walkoff wins in a doubleheader Wednesday at Platte County High School.

In the opener, Platte County had only four hits but drew 13 walks, plating 10 in the fourth inning to finish off the first victory. Drew Boyer, a sophomore, pinch hit late in the inning and doubled home a run before the game-winning run came home on a wild pitch. The only other RBIs in the inning came on a bunt from Wassmann and a groundout for senior Brett Domann.

The teams were scoreless after the first.

Ruskin, which finished with only one hit, scored its run in the top of the third. After Jenks threw two scoreless innings with four strikeouts, senior Kyle Box came on in relief and allowed one run on a walk while striking out four in his two innings.

In the second game, Platte county scored six in the second and nine in the third after another scoreless first to support Spence, who started and struck out four while walking one in two winnings. Platte County senior Brett Domann struck out the side in the third before the Pirates finished the walkoff win.

There were only two hits and 13 walks this time around for Platte County. The winning run came home on Boyer’s groundout to the pitcher that allowed Dean to score from third. Pirates senior Patrick Sullivan (walk), Dean (hit by pitch), Domann (walk), sophomore Brian Chandler (walk), Spence (walk) and Box (walk) also had RBIs in the third when the first 10 batters reached either by walk or a hit by pitch.

Platte County’s first two runs in the second scored on an error before Box added an RBI single to make it 3-0. Habel had an RBI walk, an error led to the fifth run and Habel came home on Domann’s sacrifice fly.

The Pirates ended up with a walkoff victory Tuesday at Platte County High School, putting up innings of five, six and four runs.

Platte County junior James Schwieder led the high-powered offense, going 3-for-3 with two doubles, four RBIs and three runs scored, while Baker also drove in a pair and scored twice. Domann tripled in two with a triple in his only at-bat, while Wassmann tripled and scored three runs and Doll and Knudsen also doubled.

Allen started and threw two one-hit innings with two strikeouts, while Zimmerman pitched the top of the third and worked around one hit with a strikeout.

Platte County led 11-0 after Zimmerman’s inning of relief. Wassmann led off the bottom of the third with a triple and scored on Baker’s one-out single. Knudsen followed with a double, and Schwieder collected his fourth RBI with an infield single. Domann came up with two outs and his triple to center easily scored Knudsen from third, while Schwieder came all the way around from first to score the winning run.

After Benton went down 1-2-3 against Allen in the first, Platte County loaded the bases after back-to-back singles from Doll and Lewis and then a one-out walk for Dean. The first run came on Baker’s RBI fielder’s choice for the second out. The Pirates then put up four runs with two outs to make it 5-0.

Knudsen reached on a hit by pitch, and Schwieder hit a three-run double to right field and scored on an error.

Platte County started the second at the top of the order again and loaded the bases after just three hitters. Doll doubled, Lewis singled and Wassmann walked. Doll made it 6-0 when Dean was hit by a pitch to force him home, and the inning finished up with back-to-back-to-back RBI singles from Spence, Wimberly and Doll.

A week ahead of the trip to Lawrence, the Pirates allowed only four hits in a frustrating loss on a Saturday morning in Blue Springs.

Blue Springs South scored twice in the first, third and fourth innings and took a 7-0 lead into the sixth. The Jaguars took advantage of five walks, a hit batter and an error to carve out the runs against Fulk (three innings, four runs allowed, three strikeouts), Schwieder (two innings, three runs allowed but only one earned), three strikeouts) and Zimmerman (one inning, two strikeouts). The Pirates’ lone run came in the top of the sixth when Lewis led off with a walk, and Allen followed with a single. Nelson came up with a one-out double to right field to score Lewis, but Allen was thrown out at the plate trying to cut the lead to five runs.

Still down 7-1, Platte County junior Aidan Norris took a walk, but Dean popped out with two runners stranded. Allen went 2-for-3, while Nelson’s double was the only one of six hits for the Pirates to go for extra bases.