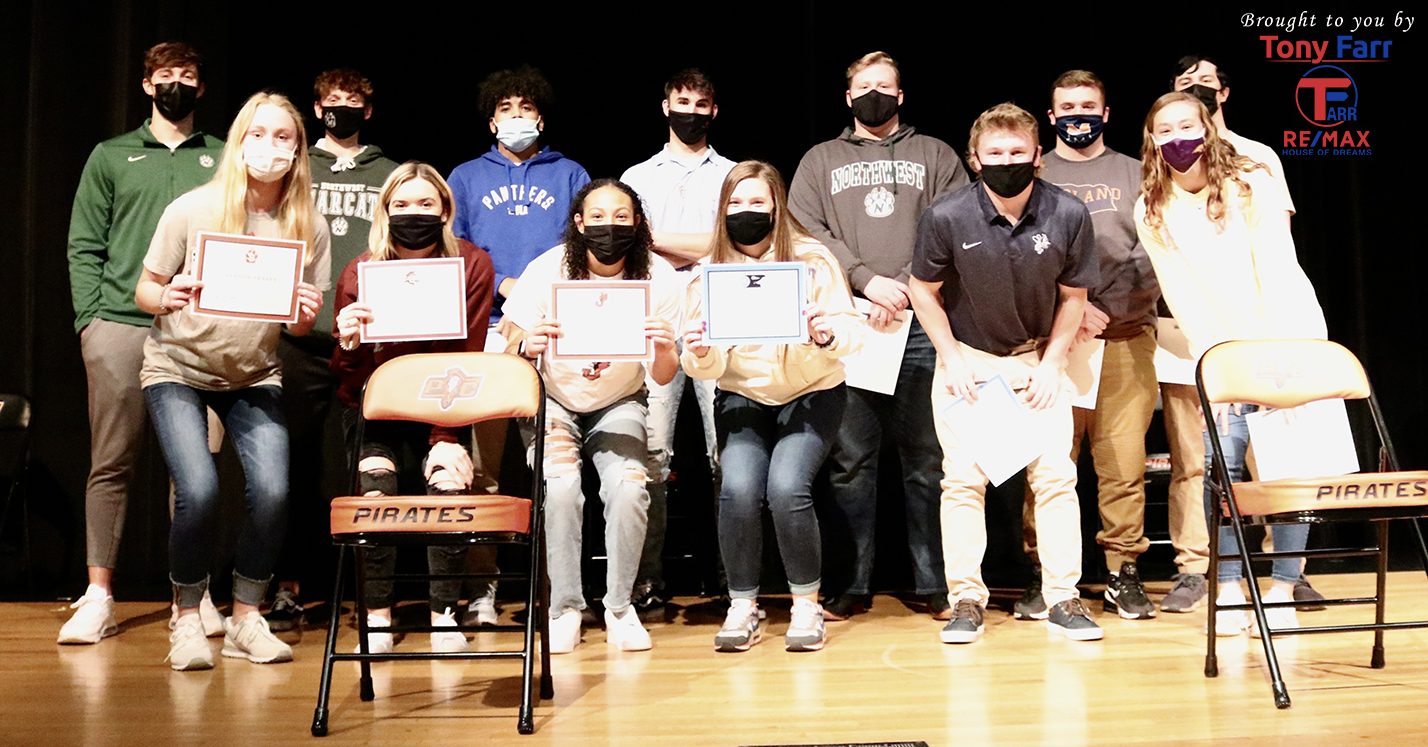 The breadth of Platte County’s senior talent and team successes were on display during a college athletics signing ceremony held Wednesday inside Wilson Auditorium.

Long ago established as the best girls swimmer in program history, Banark remains in the middle of another record-setting season. She owns owns all but two individual swimming school records for Platte County and set a new mark as recently as Saturday in the preliminaries of the Suburban Conference Blue Division preliminaries (100-yard breaststroke).

In the three years since the state split into two classifications, Platte County went from 32nd to 23rd to 16th in the final standings. Banark has been the biggest reason behind the success, earning all-state honors as a junior in both the 100-yard freestyle (sixth) and 200 individual medley (seventh) and headlining two top-16 Platte County relays. She has already won four Suburban Conference Blue Division individual races with Tuesday’s finals pending for her senior year, and qualified for state in 12 events in her first three years — the max number possible.

The ceremony Wednesday was more ceremonial for Banark, who made her Division I pledge to South Dakota in the early signing period ahead of her senior season.

“It feels like I can just race now. I have everything off m shoulders,” Banark said.

Schwieder also owns school records but enters her spring having missed a whole season of competition due to COVID-19.

Also a key member of Platte County’s cross country teams the past two seasons, Schwieder set the school record for pole vault as a sophomore at 10 feet, 1 inches, while winning a conference title. She went on to finish 10th at the Class 4 Missouri State Track and Field Championship and just miss a medal, while clearing 10-0 that weekend.

Schwieder did earn a medal that season as part of the fourth-place 4×400-meter relay team, which won the District 8 and Sectional 4 titles in the two weeks prior and set a school record at 4:01.65 at sectionals. She also won a district title as a sophomore in pole vault and qualified for state as a freshman in the event.

Although multi-talented, Schwieder will likely focus on pole vault at Division I Northern Iowa but first will have a chance to chase her school record this spring.

Bigus has also found her calling in golf after a sport change earlier in high school.

Part of a talented and balanced roster the past two seasons, Bigus helped lead Platte County to its first team Missouri State Golf Championships appearance in nearly two decades and first above the Class 1 level. The state increased the number of classifications for golf from two to four for this season. The Pirates finished with a two-day score of 780 and placed fifth out of seven teams in the final Class 3 state standings — just one stroke off of the first team trophy in program history.

“I originally was not looking to play golf in college at all, but the move from playing volleyball to golf was the best decision I’ve ever done,” said Bigus, who placed 16th at Class 3 District 4 to narrowly make the state cut in a season where she also became a back-to-back all-conference player to lift the Pirates a sixth straight Blue Division team title. “The environment is great; the girls are great. It’s a lifelong sport, and I love playing so why not continue it and pay for my college that way?”

Magee joined Platte County teammates Emma Koeneke, Maddie Carter and Grace Heater as members of this year’s 21-2 team honored after singing to play softball at the next level.

Now a three-time all-conference and all-district pick, Magee experienced a breakout season at the plate as Platte County’s leadoff hitter. She entered the season with just one career home run but hit four in a span of three days and four games, including gamewinners against Staley and Smithville. The win over Smithville avenged the Pirates’ only loss of the regular season.

Magee finished the season with team-highs of six home runs, six doubles and four triples, 11 stolen bases, 31 runs and a .901 slugging percentage from the leadoff spot, and her 28 RBIs ranked second for Platte County. She also hit .408 with a 470 on-base percentage, hitting .429 with runners in scoring position.

Platte County went 21-2 this season and beat Smithville in the Class 4 District 8 championship game to make a long-awaited return the playoffs. The Pirates last district title came in 2014 when they finished as Class 3 state runnerup, but a win over Grain Valley in this year’s quarterfinals gave the program its first state berth ever in Class 4.

Prior to this season, the state expanded to five classes, and Platte County remained in Class 4 and dropped out of the largest tier of teams.

Like Banark, Bertram sits in the stretch run of her final season, coming off a second straight district title earned Saturday. She is one of only two wrestlers to be a part of each of the first three teams in girls wrestling program history.

Now a two-time district champion, Bertram will finish as the school-record holder in nearly every category possible. She became the school’s first district champion as a junior and became one of the first Missouri State Wrestling Championships medalists in school history, placing fourth at 166 pounds with a record of 40-5.

“I had my doubts here and there, but I knew that with all my hard work I put in I wanted to be a district champion again and trying to prepare for sectionals, of course,” said Bertram, who owns a 36-1 record this season and will take a top seed into the Sectional 4 tournament in two weeks to seek a second straight state berth. “I had to give 100 percent in these matches (at districts) because I know I’m going to see them again.”

A starting guard for the basketball team, McClure’s college future will be in baseball, but his yet to be a starter for Platte County thanks to last year’s canceled season. The Pirates went 17-12 in 2019 and lost in the Class 5 District 16 semifinals, and the roster should be strong for McClure’s senior season.

McClure expects to pitch and play outfield for Platte County before moving on to continue his career at Northwest Missouri State.