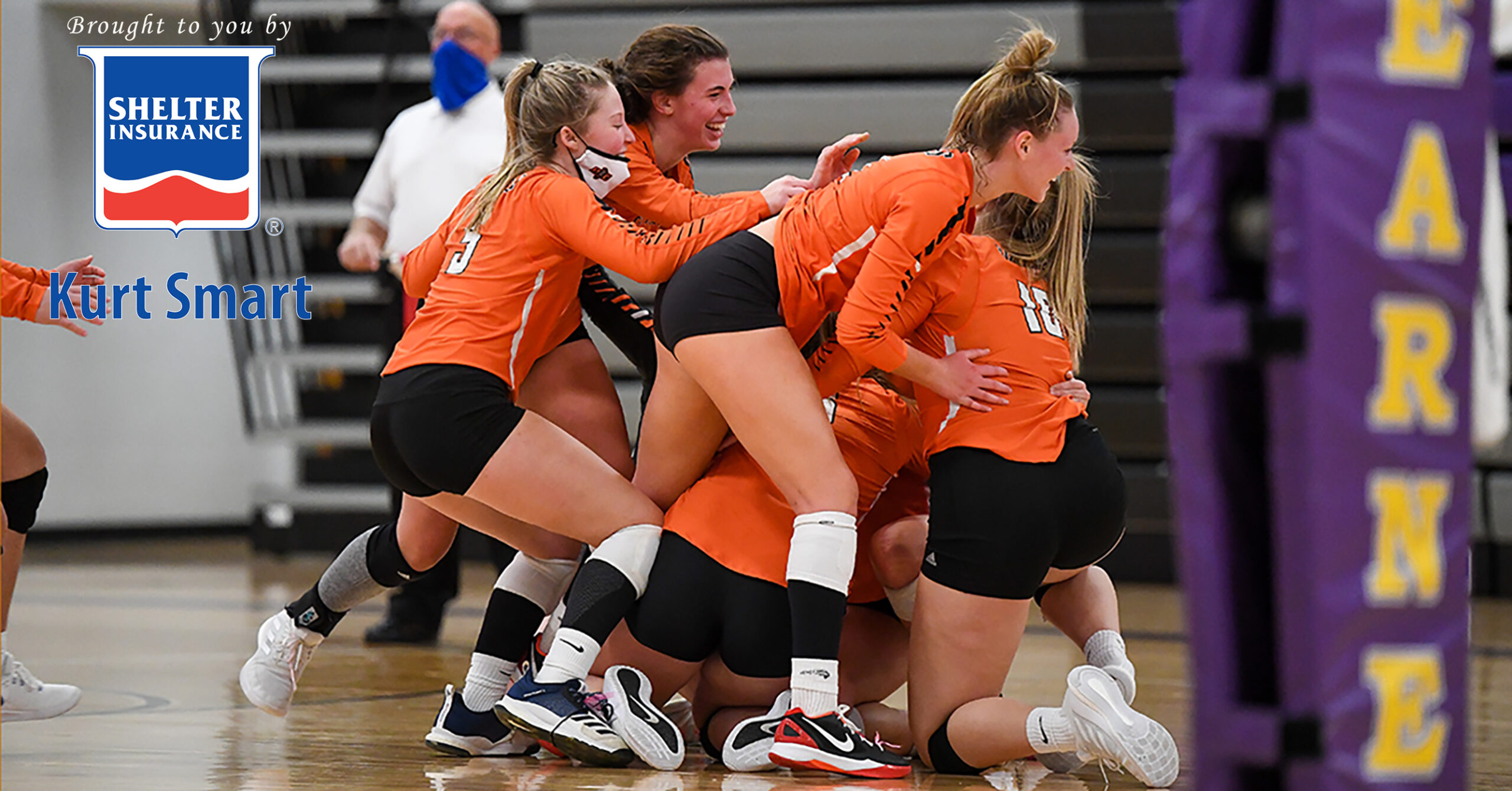 KEARNEY, Mo. — Katlyn Donovan didn’t panic when Platte County lost the opening set. The Pirates had been down before this season.

But when Kearney built and maintained a moderate lead midway through the second? Well, some worry entered the mind of Platte County’s fifth-year head coach. The Pirates finally mounted a response and came back to win the second set, dominated the third and overcame an even bigger deficit in the fourth to take a 23-25, 25-18, 25-20, 25-20 victory in the Class 4 District 16 championship match Wednesday at Kearney Fieldhouse.

“We always dig ourselves in a hole. I don’t know why. I told the girls, ‘You’re going to shave a few more years off my life,'” Donovan said after leading the Pirates to their first playoff appearance of her tenure.

With the win, Platte County (25-6-2) earned the 11th playoff trip in program history and first since 2014 — definitively the best season ever for the Pirates, who reached the Class 4 state quarterfinals. They went 33-3-2 while playing in the state’s largest classification with all three losses to Liberty.

The state expanded to five classes this season, meaning Platte County is in a unique position to better that finish. The Pirates play unbeaten Pembroke Hill (18-0) on Saturday in a Class 4 sectional at St. Pius X High School with the winner advancing to play in the quarterfinals later in the day.

Two wins — St. Pius X and Grain Valley play in the other sectional — and Platte County will make its first ever state semifinal appearance.

After winning 28 matches in both 2018 and 2019, Platte County’s chance to finally make a district breakthrough looked in jeopardy.

Kearney came in as the underdog having lost both meetings between the two teams this season — in four sets once and swept in the other — with energy on their home floor. The Bulldogs created momentum with unorthodox offense and a strong block up front.

Down 23-18, Platte County scored four straight to close within one after one of Brown’s two aces, but Kearney finished off the first set victory without trailing. Suddenly, the pressure and expectations on the Pirates as the top seed seemed a bit heavier.

“We expected a good match with Kearney,” Donovan said. “They’re a great team; they’re a great-coached team. They do all the little things really well. They’ve got some big hitters. But coming into this game, we wanted to focus on what we could control, doing the little things right, and in that first set, we were a little hesitant, a little nervous and a little tight.”

In the second set, Platte County led by one twice early and used a 4-0 run to briefly tie it at 6-6, but from there, Kearney gain control. The Bulldogs led by as much as five and were up 15-11 when a service error returned service to the Pirates.

Walter then provided seven straight points with Anderson contributing a pair of kills in the run to make it 18-15 Platte County with momentum clearly shifted. The Pirates then finished on a 3-0 run that included kills from Brown and McGehe.

“Emerson has been our go-to server this entire year,” Donovan said. “We do a good job of keeping teams out of system when Emerson is back there serving because she serves so aggressive. And then when the other team is out of system, that gets us in system quite a bit more.”

The third set belonged to Platte County from the outset. An 8-1 run behind the service of Brown and junior Mary Grace Hunter (five kills, one ace) helped the Pirates build the first of four nine-point leads at 14-5.

Kearney appeared out of gas in its upset bid.

“We had the mentality that it wasn’t over yet, so were always ready,” McGehe said.

Indeed, Kearney jumped to leads of 3-1 and 6-2 in the fourth set and eventually opened up a 12-4 advantage that put a fifth and deciding set, which is a first-to-15 tiebreaker, in play.

Platte County’s response started with a kill from sophomore Karsyn Stehlik to cut the deficit to 14-9. Walter then served for what became a 6-0 that included three aces and a kill from Anderson. The Pirates didn’t lead in the fourth set until Hunter provided a block to make it 18-17, and they wouldn’t trail again.

“Emerson is amazing,” Anderson said. “Her serves are so hard to (return). Like even in practice, I’m like, ‘Oh gosh, don’t serve it at me, Emerson.’ She’s just so content and gets back there and does what she needs to do.”

Brown had an ace during the concluding 5-0 run, and Kearney’s attack error provided championship point.

Platte County’s players and coaches were able to celebrate with at least some sense of relief. The Pirates, who had the number of games this season reduced due to COVID, would now need to reach state and win at least one match in the semifinal round robin or the third-place match to reach 28 wins again.

Even a sweep the rest of the way to a state title wouldn’t catch the 2014 team’s program record for wins, but Platte County has already written one important chapter for its legacy. These Pirates now have the chance to add to their story and make it long and memorable for the five seniors — Haley Luna, Cameron Brown, McGehe, Anderson and Firkins.

“It’s so amazing,” Anderson said. “Since my freshman year, I’ve been wanting this so bad. I’m just so glad I could get it my senior year.”

Anderson, Kate Brown and McGehe finished even with eight kills apiece, while Luna and Hunter added seven each. Platte County also rolled up 13 service aces — five for McGehe, four for Walter and three for Firkins, who led the defense with 15 digs.