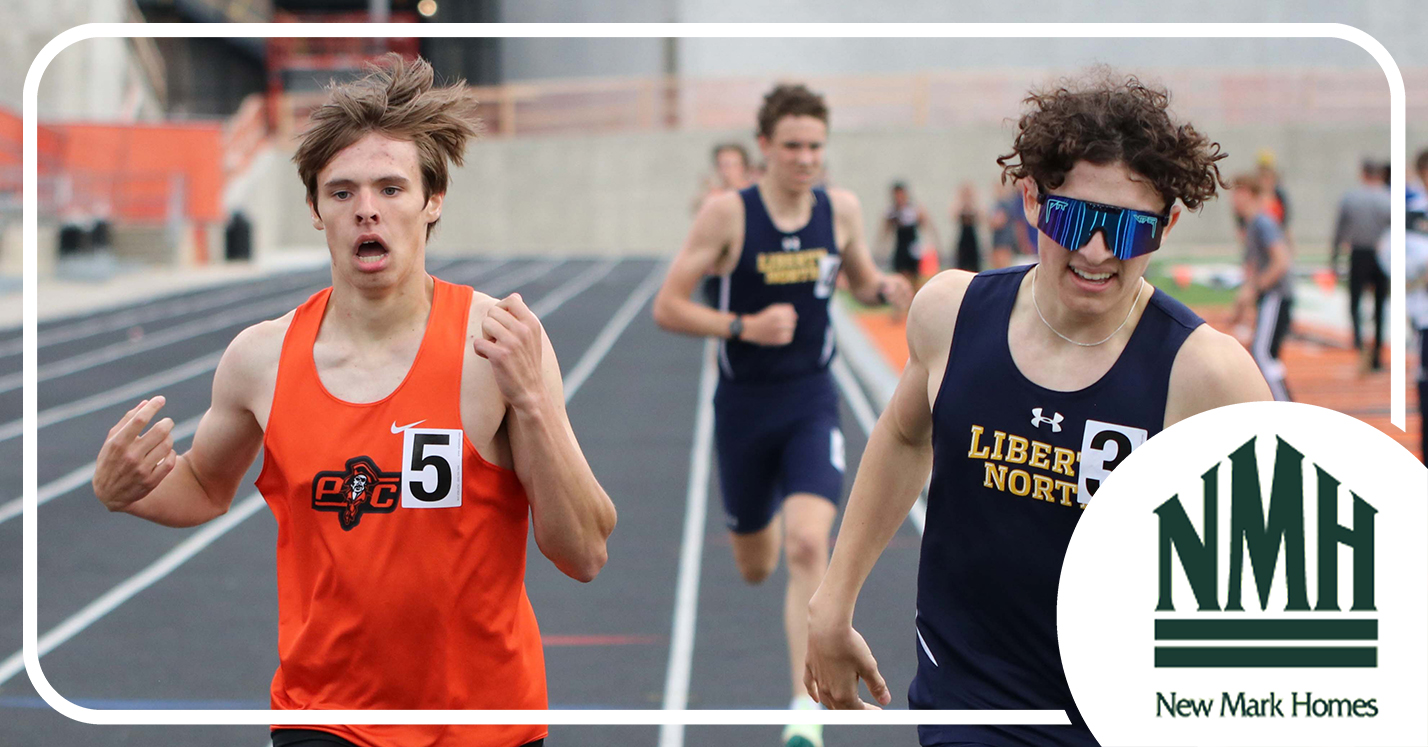 Connor Currence’s competitive side kicked in, driving a frantic sprint to the finish line.

Not even out for the team a year ago, Platte County’s breakout sophomore long-distance runner dashed in behind Liberty North’s Kaden Kleinhen and nearly made up the ground needed to steal a victory Friday evening in the Platte County Invitational at Pirate Stadium. Currence settled for second place — a characterization he would support even as he continues his rapid development after previously focusing his spring on soccer rather than running.

“That race really came down to grit,” said Currence, who finished in 2 minutes, 2.37 seconds to come in less than .20 of a second behind Kleinhen. “I give props to those guys. They’re awesome, do great things, how fast they run. I’ve just got that competitiveness in my mind where I want to beat that guy ahead of me. I always want to catch that dude, and I don’t like losing.

“Losing, getting second in this race, it kind of makes me mad, but second place is second place. I’ve got time to improve, and I can’t wait to improve.”

Currence opened the season running a comfortable sub-5 minute 1,600 and recently trimmed his season-best in that event to 4:46.52 to be right in line with Platte County senior teammate and returning Class 4 Missouri State Track and Field Championships qualifier Andrew Early, who finished fifth in the 800 (2:08.69) behind his new long-distance teammate. The Pirates’ home meet marked Currence’s first open 800, and he nearly broke the 2-minute barrier on the first go.

Platte County recently found out about a move to Class 5 for this year’s postseason, but Early and Currence will be leading contenders to earn individual state berths in a much tougher field than any previous year for the program. They also lead the Pirates’ 4×800 team, which placed second to Liberty North on Friday with junior Ryan McCoy and senior Jace Trimble rounding out the team.

Early, Trimble and McCoy ran on last year’s Class 4 state 4×800 relay for Platte County, and while Class 5 District 8 and Sectional 4 will be loaded, Currence gives them an additional strong leg that could put them in contention.

“I love having (Early) there for me,” Currence said. “He’s helping me out; I’m helping him out. I’m going to be sticking with track. Soccer is my mine priority but through this track season, I’ve started to learn how much I’m going to be able to do with this.”

Platte County enters close to full strength and starting to see the expected drop in times and increases in distance from key members of the team, including senior sprinter/jumper Victor Sewankambo and senior hurdler Chandler Steinmeir.

Sewankambo, a state qualifier in the long jump and 4×100-meter relay as a first-year junior, posted two more personal-best times in individual events and added a field event victory on a memorable day. He opened with a new low time in the 100 of 11.07 to easily best Libery North’s Myles Tigers for the top spot. He then ran the 200 for just the second time in his career and went sub-23 at 22.82 to just miss third place and finish fourth.

“I was kind of nervous about it,” said Sewankambo, who also topped the long jump field with a winning distance of 6.06 meters — more than 0.25 of a meter better than second-place Wyatt Davis of Liberty North. “But at the same time, I wanted to dare myself and see what I was going to get. I just made a major PR in my 100, 11.07, and now it’s a 22 (in the 200). I want to see what I can do from here. I feel like it’s an issue of endurance. I know I have the speed.”

Sewankambo burst on the scene as an unknown junior and quickly became Platte County’s top sprinter but never went below 11.36. He has bested that time on three different occasions as a senior in addition to recently looking at his ability to add the 200 to his event list.

“I knew exactly what I had to do,” Sewankambo said. “I used the summer to try to improve in the areas I knew I was really weak at. I can’t say I fixed everything, but I know I’ve improved.”

Platte County’s 4×100 relay finished second in 44.02 in a near dead heat with Oak Park (43.97). Sewankambo ran anchor behind junior Nate Walls, senior Trevor Scott and senior Cole Rhoden, who tweaked his quad in the 4×200 race later in the day and sat out the open 200. The Pirates were just off their season-best of 43.91 and about a half second behind the school record set last year in Class 4 Sectional 4 competition.

Sewankambo and Scott hold a piece of the school record but junior Carter Salzman has been nursing injuries to start this year, while junior Garrett Smith-Dean is not currently on Platte County’s roster. Walls transferred from Park Hill where he helped the Trojans medal at state in Class 5 a year ago, while Rhoden has improved his sprint times to earn his shot.

A year earlier, Platte County peaked down the stretch outside of a botched handoff at conference, and the Pirates hope to follow that path again this year.

“It’s pretty tense when you use a few members of the team because of the chemistry you have together,” Sewankambo said. “Relays are all about chemistry. People think it’s about speed; it’s really about the friendship you have, the chemistry you have with each other. But we’re athletes, and we’re pretty good athletes at Platte County. Above many things, I know we can adjust, and every single time we go out there, we just try to do our best and make sure we make it happen every time we get the chance.

“Maybe we’re not there yet, but hopefully — I can’t promise anything — hopefully we will be there because we keep on improving. This is not where we started.”

Platte County’s 4×200 team of Rhoden, Scott, Steinmeier and junior Cameron Wolfe also came in second at 1:32.89, again just behind Oak Park (1:32.54) to round out the strong relay showings.

Platte County sophomore Andrew Johnson turned in the other top-three showing in running events, placing third in the 3,200 (10:21.96). Outside of Sewankambo’s win in the long jump, the Pirates struggled in field events, but junior Andy McClure continued a strong season in the triple jump, placing second at 12.91 meters. He came off setting his season-best distance 13.01 a week earlier.

In the closing portion of the meet, Platte County again featured a co-ed 4×400, and the Pirates placed third behind Liberty North and Winnetonka. The Pirates’ team of Trimble, Early, sophomore Emma Reed and freshman Rylee Pickett finished in 4:15.01.