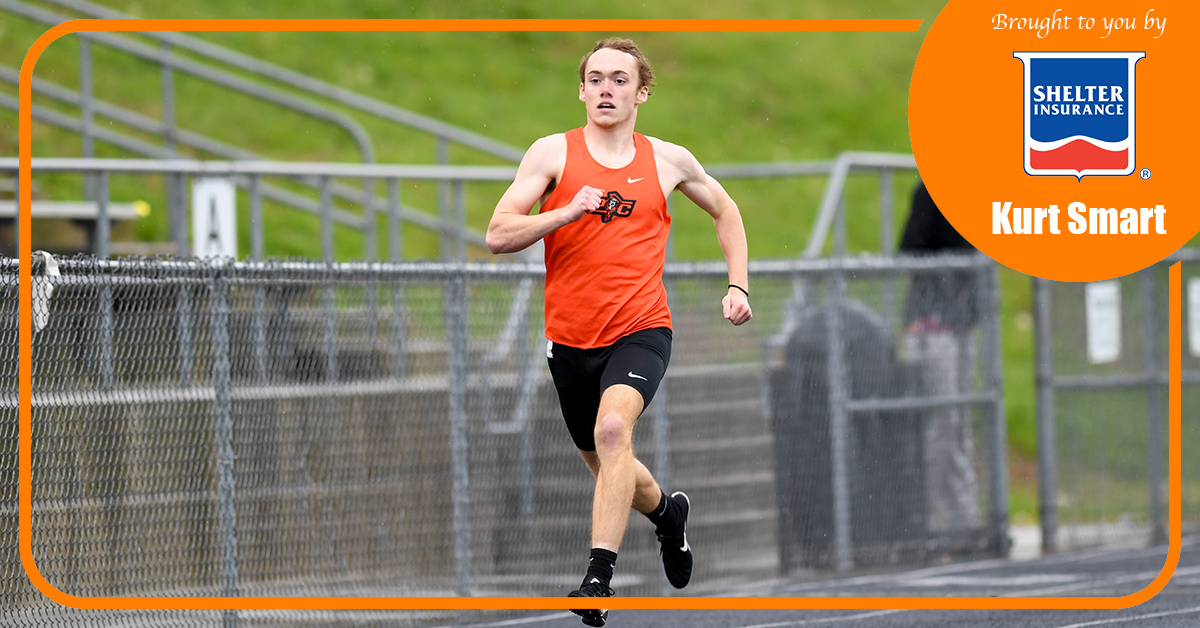 Crowley finally back on track, wins 400 and anchors 4×400 at home meet

Jaxon Crowley endured a wait longer than most to finally see all of his training start to payoff.

A senior nearing graduation day, Crowley missed all of football season due to the lingering effects of a torn hamstring, watching on as Platte County reached the Class 5 Show-Me Bowl in a historic season. He still hasn’t made it back to full strength, but after not being able to run as a junior due to the pandemic, there’s no time to waste.

Crowley celebrated Senior Night during the Platte County Invitational on Friday at Pirate Stadium by winning the 400-meter race, finishing in 54 seconds flat to beat Lawson junior Colt Kessler by .80 of a second.

“I came out. It was a beautiful day. I felt really good,” Crowley said. “They put me in Lane 7. I knew it was gonna be hard, but I felt good all the way through and I finished strong.”

With Platte County coaches stacking the unique co-ed 4×400 relay, Crowley also received a shot to anchor the 4×400 to close the meet. He responded with a 53-second split and helped a Pirates’ quartet that also included freshman Josh Nelson, sophomore Bryan Jennings and senior Luke Filger to a runnerup showing behind Smithville.

Platte County finished in 3:41.40, and Crowley knows he still has an opportunity to earn his way into regular rotation for what most consider the premier relay event.

“The three other people with me today in the 4×4, two of them are younger, but they still ran great,” he said.

Platte County came away with five individual victories out of 19 events in the five-team field that also included Winnetonka, St. Joseph Central, Smithville and Lawson.

Relays accounted for two, while Platte County senior Joey Schultz won both the triple jump and high jump in difficult weather conditions to join Crowley as a gold medal winner in the Pirates’ home meet. While the 4×400 came in second, their 4×100 team of juniors Trevor Scott and Victor Sewankambo plus sophomores Carter Salzman and Garrett Smith (45.00) and the 4×200 team of Salzman, juniors Cole Rhoden and Chandler Steinmeir and senior Jaden Burnett (1:33.60) were first.

Platte County has completely rebuilt the roster under first-year coach Jerod Smith from two years ago, but the pieces of an unexperienced team appear to be coming together as the Suburban Conference Blue Division Championships approach on Friday. Grandview will host two days later than originally planned due to Wednesday’s inclement weather.

“Every day in practice we’re finding out who can do what, and we’re all just getting better every day,” Crowley said.

Schultz did pull triple duty in field events for one of the few times this year, and he edged Sewankambo for the long jump title (5.79 meters to 5.77 meters). The Pirates had four of the top five finishers with sophomore Zay’Quan Hall (5.67 meters) and Rhoden (5.66 meters) coming in fourth and fifth.

In the triple jump, Schultz led another 1-2-4-5 finish. He went 12.69 meters to outdistance sophomore standout Chandavian Bradley, who finished third in the high jump at 1.75 meters, by .19 of a meter for first, while senior Kevin Hughes (11.80 meters) and sophomore Dominic Spears (11.61 meters) were fourth and fifth.

Bradley and Nelson finished tied for second in the 200 at 24.10 for Platte County, a half second off event winner and Smithville junior Noah Riecker, while Steinmeir finished second and third in the 110 and 300 hurdles events, respectively with Smithville junior Rhett Foster claiming both titles.

However, Bjustrom and Steinmeir came back from potentially frustrating days to run legs in the co-ed 4×400 along with senior standouts Haley Luna and Bryn McGehe from the girls team. Luna, a two-time Class 4 Missouri State Track and Field Championships qualifier and 2019 medalist in the open 400, ran a blistering open lap before handing comfortable lead to Bjustrom.

McGehe and Steinmeir cruised on their laps to give Platte County an easy win, a title the team takes pride in with the event rarely run anywhere else.

Platte County also came close to victories in field events. Pirates senior Dylan Montes finished third in both the shot put (13.13 meters) and discus (35.22 meters), just in front of senior teammate Keaton Smith in the shot put, while senior Tryce Brooks continued his swift development in the javelin with a second-place finish at 40.35 meters.