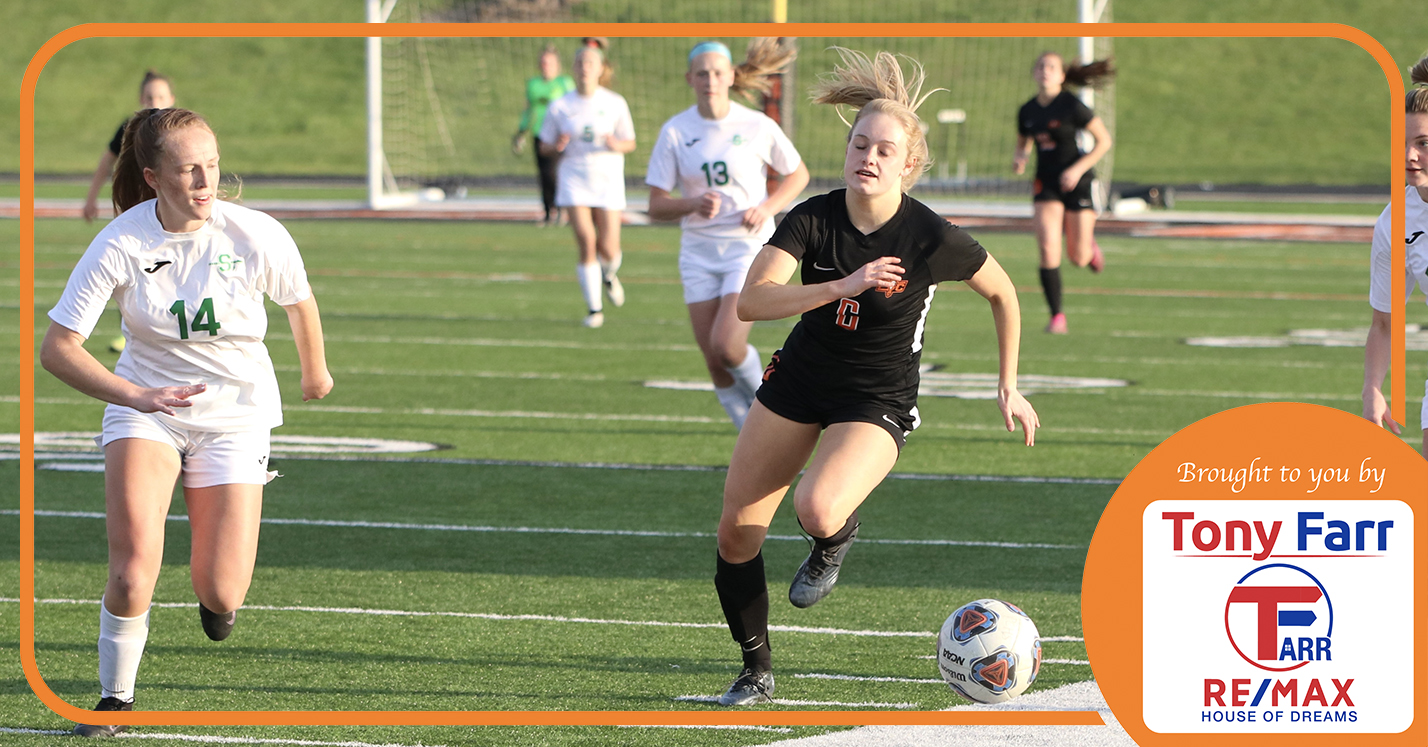 Moments after tumbling to the turf inside the 18-yard box, Allie Corbin confidently stood at the penalty spot ready to finish what she started.

Platte County’s reserve senior midfielder didn’t waver at the opportunity and calmly slotted home a penalty kick low and to the left of Smithville sophomore goalkeeper Katelyn Burkhart. The first half goal stood up as the winner in the Pirates’ 1-0 shutout Thursday at Pirate Stadium.

“I was like it’s my foul; I think I deserve it,” said Corbin, who scored in a second straight game.

Neece made three saves in the first half, and Krahenbill, who helped keep the streak intact with two saves in a PK shootout a week earlier, stopped four shots in the second half to continue her strong run of play.

Smithville controlled most of the possession late with Platte County looking to see out the win.

Krahenbill made a pair of easy saves on free kicks from dangerous spots in the closing minutes of the second half, and she smothered a low shot from Warriors sophomore forward Sydney Weers in the 78th minute to snuff out the final gasp. Pirates senior central defenders Emma Murray and Ryanne Rhude were again solid with sophomore left back Morgan Stewart and freshman right back Alex Beeman continuing to improve as the season moves along.

Platte County navigated four yellow cards, one charged to coach Ashlyn Brantley on the sideline for dissent as she asked the head referee to protect her players, in a contentious rivalry matchup.

“I think our backs are doing very well. I think Emma and Ryanne are keeping them organized and talking a lot, which is helping how they’re playing. They’re doing great,” Brantley said.

Smithville also started quickly and forced Neece into a pair of saves in the first 15 minutes.

Platte County answered back with junior forward Aleah Dixon firing in a shot at the near post off of a creative dribble-pass sequence from Smith that Burkhart saved, and senior midfielder Kylene Loy ended up with a shot deflected out of bounds in the 18th minute off of a probing long ball from Dixon. The best opportunity for either team came in the 24th minute when Dixon collected the ball in the middle of a double team along the far sideline before finding Loy just outside of the top of the box.

Loy then slashed into the middle and fired a pass to Corbin, who dribbled twice before Smithville sophomore Sophi Larson clattered into her from behind with a clumsy tackle. The referee immediately signaled the foul.

Corbin briefly conferred with Smith before opting to take the kick in the 24th minute.

“I’m not a confident person, but with PKs, I haven’t missed a PK yet so I was like I might as well take it,” Corbin said. “So it was nerve-racking, but I was pretty sure I could do it.”

Platte County then started to control possession, continuing a trend of slow starts only undone after a goal comes, but Smithville started to tune up its pressure again as halftime approached. Weers tested Neece with a right-footed shot in the 34th minute, but the Pirates managed to get into halftime still with the one-goal advantage.

“We did come out slow, and usually, that doesn’t happen in big games,” Brantley said. “We’ve got to go back to the drawing board to see what we need to do to come out ready for those because we did come out a step behind. We were reacting things. We dug ourselves in a little hole trying to get out of it, and then we got that goal. We did get some momentum off of that, which seems to be a trend.”

Loy and freshman midfielder Addison Bradley both fired shots wide of the goal early in the second half for the final two best chances for Platte County. Those both came in the first 12 minutes out of the half, but neither team consistently generated shots in a cagey matchup of Suburban Conference Blue Division rivals.

Platte County improved to 10-1 overall and 5-0 in conference play, already with three combined wins over Kearney and Smithville. Two of those were in Blue Division matchups, giving the Pirates the early edge in the conference championship and Class 3 District 16 top seed chases.

After a Monday matchup at Grandview, Platte County takes a break from league play with the North Kansas City Tournament before playing at Benton next week ahead of return road trips to Kearney and Smithville next Tuesday and Thursday.

“I’m hoping it does (help from a confidence standpoint),” Corbin said. “It just depends on who we play, and I hope in the future we don’t think, ‘Oh we won last time. It’ll be easy.’ I hope we are ready to play each game.”

The Pirates only needed a half for a home win in conference play Wednesday at Pirate Stadium.

Smith tallied a hat trick in just 13 minutes, and Corbin added a pair of goals in a dominant effort against overmatched Ruskin. In fact, Smith took the opening kickoff for Platte County and weaved through the defense, scoring unassisted in just 11 seconds. Pirates sophomore forward Sloan Kassen then assisted Smith on her second goal a little more than 2 minutes later and set up Corbin’s first goal in the 10th minute that made it 3-0.

After Smith finished her hat trick on an assist from Corbin, Platte County went ahead 5-0 on Kassen’s goal on a pass from junior forward Hannah Stone.

Corbin scored again in the 15th minute on an assist from Dixon, and Loy, sophomore midfielder Mackenzie Shields and freshman Carmen Gentilia had the next three goals for Platte County. Dixon added a second assist on Gentilia’s goal, while Gentilia and freshman Marissa Orellana also had assists.