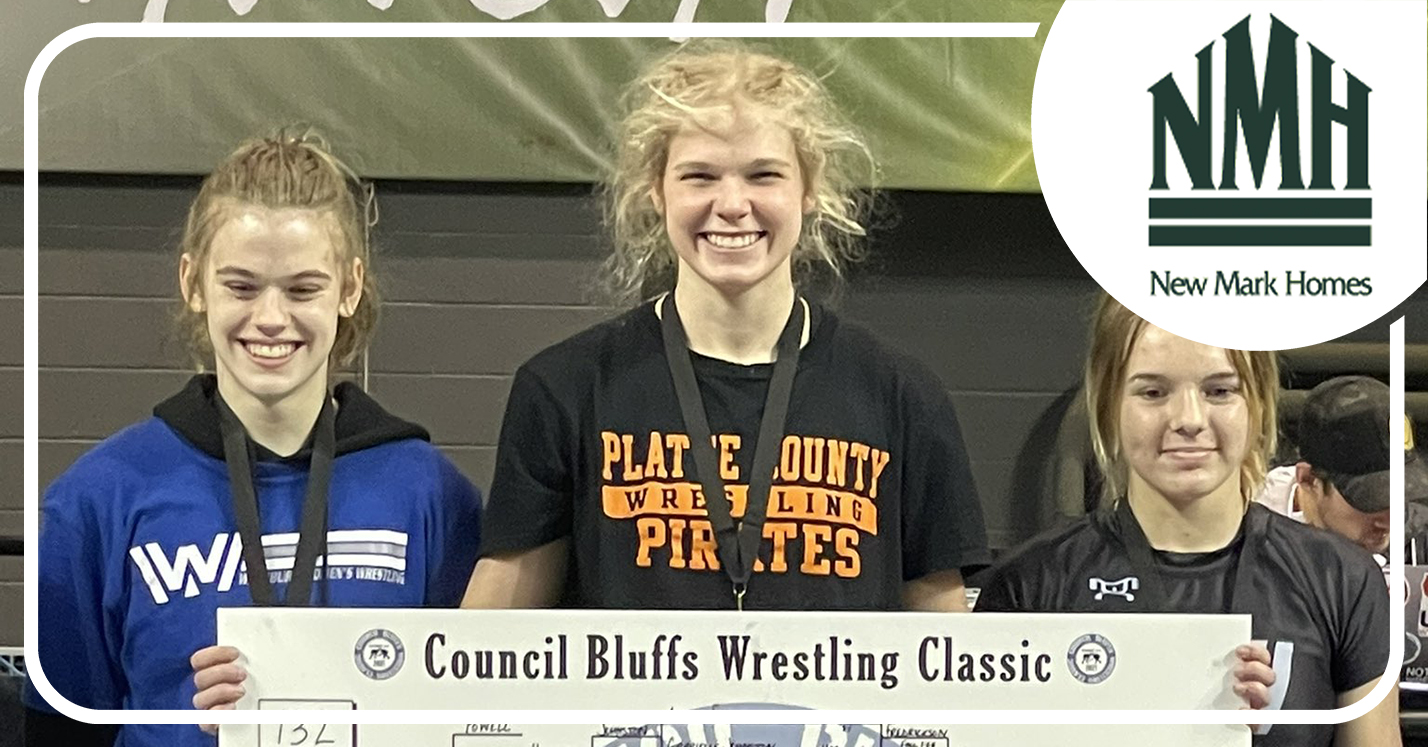 Platte County junior Audrey Call holds the bracket after winning the 132-pound title in the Council Bluffs Classic over the weekend. CONTRIBUTED PHOTO

Platte County took on one of the biggest challenges in the program’s history and came out not only more experienced but highly successful. The Pirates placed fourth out of 26 teams this past weekend in the Council Bluffs Classic, which drew competition from five different states.

In a straight bracket format, Platte County ended up with five-top finishers and accrued 92 points as the top Missouri team. The Pirates finished behind only champion Washburn Rural (Kansas), Lewis Central (Iowa) and Gardner-Edgerton and were just nine points back of second place.

Platte County junior Audrey Call led the effort with an individual championship at 132 pounds. Not only did she win all four matches, all four came by fall and the first three were in the first period.

Fredrickson led 4-2 late in the first period after a reversal and putting Call to her back for two near-fall points. Call closed the gap with an escape before the second period and dominated from there. She rolled up 14 points in the second period, including seven on three separate near-fall situations.

Call led 23-8 when she scored the pin in the third period.

Platte County senior KayLyn Munn, a two-time Missouri State Wrestling Championships medalist and 2021 finalist, took her first loss of the regular season and just her third the past two years as the Pirates’ other finalist. The tournament only featured 12 weight classes, and she wrestled up at 235 with the next available option down at 185.

Munn received the top seed and a first-round bye in the eight-competitor bracket then pinned her way into the finals in just 33 seconds.

In the championship match, Munn granted an escape to Olathe North (Kansas) sophomore Hailey Conley to start the second period after a scoreless first. That ended up being the lone point in a 1-0 decision victory for Conley. Munn chose bottom in the third, and despite Conley carrying a stall warning picked up in the second, she maintained control for the full 2 minutes and earned the narrow victory.

Burge went 2-2 overall after receiving a bye into the quarterfinals to match up with top-seeded Catherine Duong of Olathe North, who prevailed in a 10-2 major decision. Burge won her next match by fall then lost by fall to Washburn Rural’s Kendall Reid in the consolation semifinals.

In the fifth-place match, Burge earned a 9-4 decision over Clarissa Moyer of Nebraska City (Nebraska). Burge’s losses ended up being to the champion and third-place finisher.

Humburg competed in a full 16-competitor bracket and won her opener by 7-3 decision against Michaela Konzem of Gardner-Edgerton. After a quarterfinal loss by first-period fall, Humburg won her final three matches with two pins and a 9-0 major decision over Konzem for fifth.

The lone loss for Humburg came against the fourth-place finisher.

Geddes continued her strong debut senior season. Like Humburg, she won an opener — first period pin against Quinn Velder of Abraham Lincoln in Council Bluffs. Geddes then ended up in the consolation part of bracket after a quarterfinal loss. She ended up alternating pins for her entire 3-2 run in the tournament topping Abigale Holtz of Millard North (Nebraska), losing to Carmen Alston of Washburn Rural and pinning Yvette Vargas of Millard South (Nebraska) in the second period to close the tournament.

The losses for Geddes came to the runnerup and fourth-place finisher.

Battle of the Braids

Gearing up for the trip to Council Bluffs, Platte County traveled to Fort Osage last Wednesday for a 31-team tournament of mostly Missouri competition. No team scores, and weight classes featured up to six small round robins based on experience and seeding.

Munn went 2-0 with a 2-0 decision over Cameron’s Hollie Hedgpeth and a 5-1 decision over Mary-Mae McMillan. All three were Sectional 4 qualifiers a year ago.

At 130, Humburg didn’t leave the second period in either of her matches with pins of Grace Bull from Paola (Kansas) and Kira Nichols from Hickman. Burge went 1-2 with another loss by fall to Park Hill freshman star Angelina Vargas before coming back to pin Laney Cecil of Kearney for second. Vargas beat Burge in a tournament during the opening week of the season, as well.

In addition to the A champions, Call placed first in the 135 D bracket with a pair of first period pins.

The Pirates suffered their first dual loss in a return to non-tournament action Wednesday at North Kansas City High School.

North Kansas City won five of six head-to-head matches, while Platte County scored 24 points on forfeits at 115, 130, 135 and 194. The highlight for the Pirates came int he finale when freshman Maggie Assel scored her first career win, pinning Olivia Turney at the 2:45 mark of the second period in the 235 match. Assel led 2-0 after the first period on a takedown, chose the top position to start the second and turned Turney to her back from there to earn the fall.