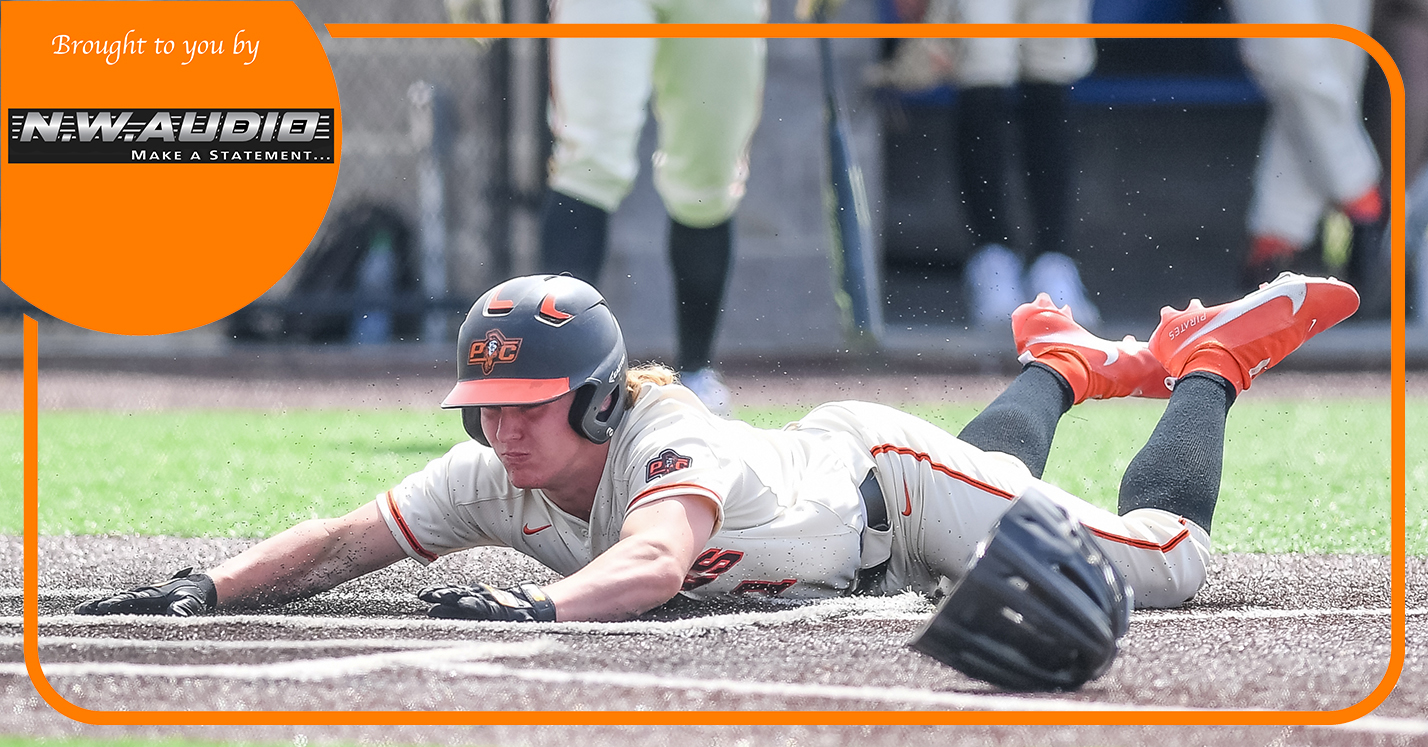 Platte County and Kearney have played a pair of high-drama, one-run games so far this season. They’ve now split the wins.

On Thursday, Kearney scored late and held off a late threat for a 3-2 victory at Kearney High School. The Pirates finished off an uncharacteristically busy week with a pair of losses, the first coming in the championship game of the Butch Foster Memorial Classic two days earlier.

Even with a rain postponement Wednesday, Platte County played five games in four days, testing the pitching staff’s depth. For the most part, the Pirates responded well.

Platte County seemed to have a shot to sweep the Suburban Conference Blue Division games with Kearney this season, scoring single runs in the fifth and the sixth to take a 2-0 lead. However, the Bulldogs came up with three of their four hits and a walk in the bottom of the sixth to plate three runs and take the lead for the first and only time.

Kearney opened the inning against senior right-hander Landon Fulk, who came on in relief of junior left-hander Sawyer Allen, with a single. After a walk, the Bulldogs tagged Fulk for a game-tying two-run double to left field. Allen came back in to pitch and gave up a single and a sacrifice fly to to plate the tying run.

Platte County then induced an inning-ending 4-6-3 double play to stay within one run. Needing that one run or more to extend the game, the Pirates put on pressure with a one-out single from senior center fielder Dayton Mitchell and a walk from freshman right fielder Devin Wassmann.

The runners were stranded there.

Allen ended up pitching all six innings, allowing only two hits and a walk while striking out five. He was in line for the win after sophomore left fielder Garrett Smith hit a one-out single in the fifth and advanced to second ahead of junior second baseman Ben Spence’s RBI single.

Platte County stranded two in the inning but came back for a second run in the sixth when junior shortstop Cameron Lewis singled with one out and went to second on sophomore catcher Jakob Knudsen’s two-out single to left.

Smith, who finished 3-for-3, then singled in Lewis, but Kearney threw out Smith at second trying to advance on the throw home for the final out. The Pirates had seven singles and a walk but stranded nine. The Bulldogs’ seventh-inning double was the only extra-base hit of the game.

With the loss, Platte County dropped to 14-6 overall, having lost four of the last seven. The Pirates are now 7-2 in Blue Division play with a key rematch at home against Smithville on Monday. The Warriors (16-5) have won 15 in a row after a 1-5 start to the season, including a win over Platte County in the first meeting between the two this season.

Smithville is 6-1 in Blue Division play and currently sits atop the standings with Kearney at 4-2. Platte County can work its way back into the conference title scenario with a win over the Warriors but would need significant help.

The Pirates completed a rare triple-header on Monday with a shutout in Blue Division play Monday at Creekside Baseball Complex in Parkville.

After winning its first two games of the Butch Foster Memorial Classic earlier in the day, Platte County welcomed Grandview for the conference matchup. The Pirates scored 11 runs in the first and seven in the second in their only two times at the plate.

Grandview managed just one hit in three innings against Platte County senior Alex McClure, who struck out five and walked two. The Bulldogs’ single came with two outs in the third before McClure struck out the final batter to end the game.

In the second, Platte County sophomore Dylan Robertson singled in Fulk, and sophomore James Schwieder added a two-run single to make it 14-0. Mauzey came up with the big hit of the inning, a two-run triple to center before junior Kole Jenks doubled in the final two runs with two outs.

Platte County finished as runnerup in an eight-team tournament that included seven teams from nearby schools in Kansas.

In the first round early Monday, Platte County built early leads of 8-0 and 12-4 against Spring Hill before having to hold on for a 13-12 victory. The Broncos scored three in the top of the seventh but stranded the potential tying run at second base.

Mauzey went 3-for-4 with two doubles and scored three times for Platte County, while Mitchell homered, going 2-for-3 with a two walks and two RBIs. Wassmann and Allen also had multi-hit games for the Pirates, who used five pitchers while attempting to avoid exhausting their top options to start a busy week.

Jenks earned the win despite pitching only 2/3 of an inning after coming on in relief of Schwieder to start the third inning. Robertson, senior Jackson McMahan and Spence also worked at least one inning with McMahan having the best day, allowing only two hits and a walk while striking out five in 2 1/3 innings.

Platte County scored eight in the bottom of the second, starting with junior Eli Nelson’s RBI single to make it 1-0. Allen followed with an RBI double after the second run scored on an error, and senior Cayden Davis made it 4-0 with a run-scoring infield single. With two outs, Wassman singled, Mitchell doubled in two and Peterson singled for three consecutive run scoring hits.

In the inning, Platte County had eight hits and two walks.

A four-run third included Spence’s RBI single to score Allen after he walked to open the frame. Mitchell then hit a two-run home run to left field to make it 11-4, and Mauzey scored on error after stealing third to reestablish the eight-run lead.

Platte County’s final run, Wassmann scoring on Peterson’s sacrifice fly, in the fifth made it 13-9 and ended up being important.

The semifinals were played later in the day, and Platte County advanced to the championship game with a 14-0 win in five innings over Bonner Springs. The Pirates scored in all four times at the plate despite having only seven hits, and Allen, Fulk and Robertson combined a two-hitter. Allen struck out four in two innings, while Fulk fanned six in 2 1/3 innings of relief to earn the win.

Platte County drew nine walks, three from Wassmann and two from Peterson, and Bonner Springs committed four errors. Spence and Mitchell both scored three times, while Wassmann, Mauzey and Peterson each scored twice. Spence had a double while Peterson, Mitchell and Mauzey all tripled. Mauzey’s two-run triple highlighted a six-run first, while Peterson had a two-run triple in a four-run second.

Mitchell’s RBI triple made it 12-0 in the three-run third, and he scored on a passed ball before Wassmann walked in the next at-bat.

With the two wins, Platte County advanced to Tuesday’s title game against Paola with the Pirates playing their fourth game in two days.

Platte County led 2-0, tied it 4-4 with two runs in the bottom of the seventh to the extend the game but immediately gave up three in the top of the eighth. The Pirates put up two runs in the eighth on Smith’s two-run, two-out triple, but he was picked off third to end the game.

In the sixth, Platte County also ended the inning on the base paths with Mitchell out at the plate trying to come home on a wild pitch. Had he scored, the Pirates would’ve had a walkout win.

Instead, Paola scored three in the eighth on just two singles and a hit by pitch against Schwieder and Spence. Schwieder pitched 5 1/3 innings in relief and gave up five runs on six hits and four walks while striking out five, and Spence came on with one out in the seventh and allowed two more to score, while striking out two.

In Platte County’s half of the eight, Allen singled with two outs and Knudsen walked ahead of Smith’s triple. The Pirates’ two-run seventh included a walk from Smith, who then went to second and third on passed balls before making it 4-3 on Spence’s RBI single. Spence scored on Wassmann’s RBI groundout, and Paola intentionally walked Mauzey. The next pitch to Peterson was wild, but Mitchell couldn’t score the winning run.

Platte County had single runs in the second and fourth to take a 2-0 lead. Mauzey led off with a double and later scored on Allen’s RBI groundout in the second, and the Pirates’ next run came without a hit with Lewis, who was hit by a pitch with two outs, eventually scoring on a wild pitch.