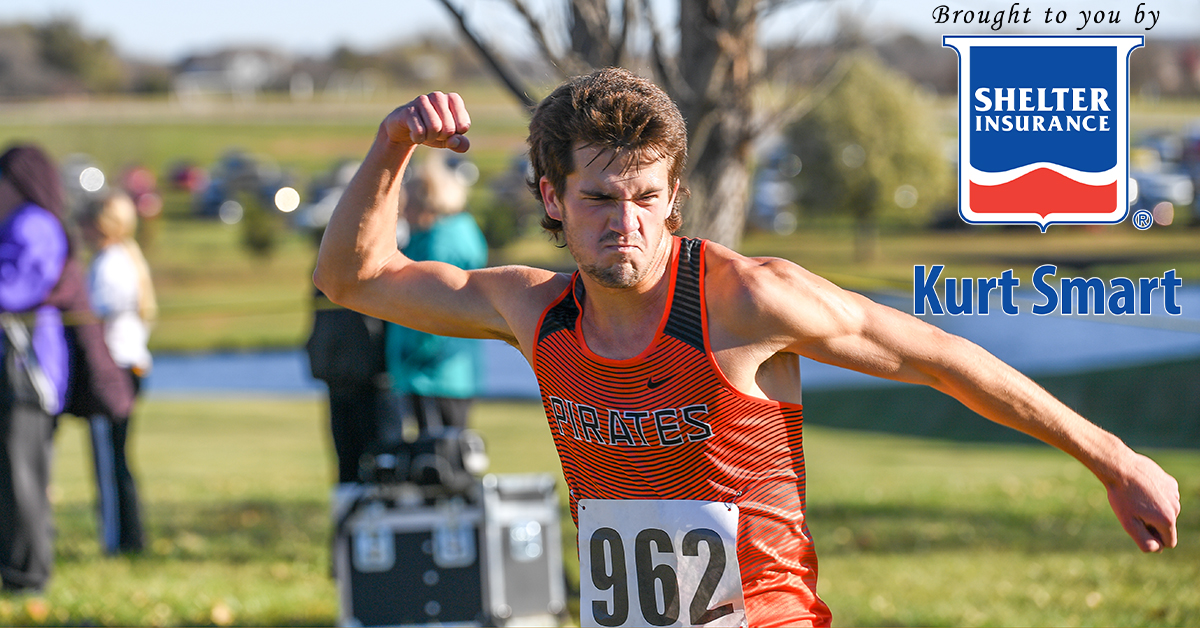 Platte County’s commendably conscientious and unwaveringly humble senior let fly a guttural scream and a huge pump of his right arm. Unsurprisingly, he seemed to instantaneously grasp the scale of the moment on a pleasant Saturday morning at Jesse James Park.

Bjustrom won the Class 4 District 8 individual title — the first for Platte County since Brandon McCammon in 2003 — and his 1-2 finish with junior teammate Andrew Early led the Pirates to the team championship, as well.

While the initial celebration focused on individual accomplishment, Bjustrom started to track the proceedings. He spent most of the race neck-and-neck with Early, as has been consistent for Platte County’s top duo during the season. Bjustrom pulled away to finish in 17:27.20 before greeting second-place Early (17:33.70) and awaiting the rest of the Pirates in what was expected to be a tight top-three team race.

However, the state expanded to five classifications this fall, and Platte County remained in Class 4, giving a new path to state that also included the elimination of sectionals. The Pirates have routinely fielded some of its fastest teams during the past six years but struggled to compete in the postseason with often-much larger schools.

“I was a freshman when my brother (Nick Bjustrom) was a senior, and all those guys that helped me grow, that helped me progress, that helped get me to where I’m in today, for me to follow in their footsteps and make it as a team for the first time in I don’t know how long, I feel like I’ve made a lot of people proud,” Bjustrom said.

In fact, Platte County entered the season as a bit of an unknown after graduating the lone 2019 state qualifier Matthew Sullivan. However, Bjustrom emerged as a leader with Early becoming a competitive No. 2, and the other pieces fell into place. The Pirates even won the Suburban Conference Blue Division title two weeks ago, only to have an unexpected coaching error lead to a disqualification.

Smithville took the championship with Platte County eliminated, but in the first competition since then, the Pirates left no doubt. Smithville faded to a third-place finish, finishing a point behind Kearney for the second automatic team bid.

“What happened at conference, it happened,” Trimble said. “Personally, I don’t feel like it should have happened, but it means the world to all of us — our entire team — that we won today just to show conference was not a fluke and that we did win and that we deserve this win.”

Bjustrom and Early led the pack at the 2-mile mark of the course, and Bjustrom’s Kearney and Smithville accounted for five of the next seven runners. However, Trimble enjoyed a late sprint that allowed him to finish in the middle of that pack, and his 18:03.90 put him just 0.1 of a second behind Kearney senior Reed Beyeler.

“It was exciting,” Trimble said of the finish. “I saw one Smithville kid in front of me, and I had Kearney on my hip. And you know what? I was like, ‘Better late than never.'”

Plymell (18:40.30) rounded out the top 10 while while returning to the lineup after battling injuries in the most recent part of the season. Johnson (18:44.50) was about 4 seconds in front of a jubilant Talley (18.48.20), who despite being the Pirates’ No. 6 finisher immediately knew history had been made.

All seven runners, including Nelson (18:59.90) as a replacement for sophomore Kage Audas, will be first time state qualifiers and be building valuable experience for the future.

Bjustrom joins a list of district champions that also includes Brock Babcock, Eli Klimek, and McCammon, and all of those were in a different era for the program. Based on Bjustrom’s general demeanor, he won’t take for granted the opportunity to compete at state with all of his teammates, regardless of the final finish for the Pirates.

“I definitely had confidence I was going to make it to state this year. I had no idea I was going to be able to finish in first place (at districts) until later on in the season,” Bjustrom said. “But just putting in the hard work and all the workouts we’ve been doing, all the training, miles, waking up at 6 a.m. going for two-a-days, all that hard work, I knew it was going to pay off in some way.”