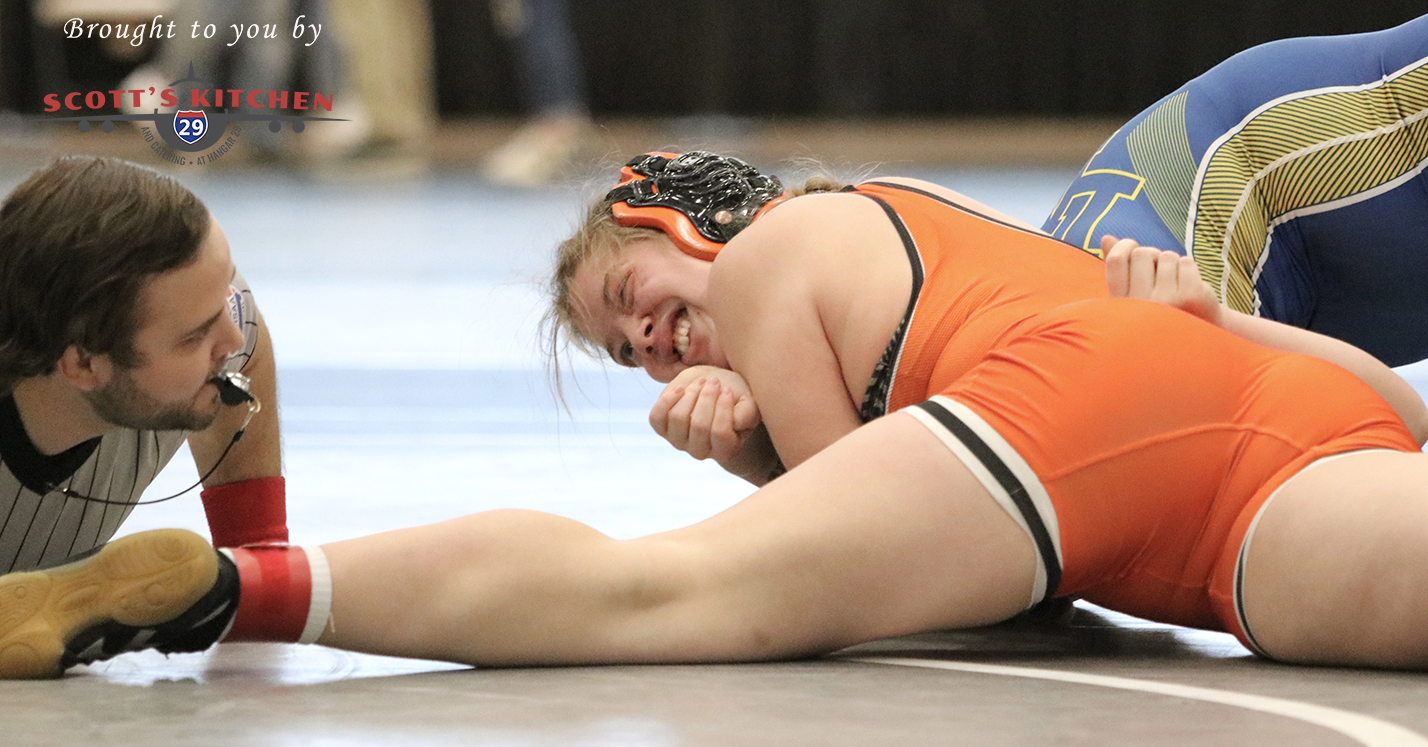 KayLyn Munn and Sarina Bertram have achieved so many firsts together as part of the first three girls wrestling teams in Platte County history. Fittingly, they will move on together to represent the Pirates in the Sectional 4 tournament next weekend after earning District 7 titles Saturday at Falcon Fieldhouse inside Staley High School.

A junior, Munn was one of the first Missouri State Wrestling Championships qualifiers for Platte County in 2019, and she and Bertram became the first state medalists in program history last season. They are also friends and practice partners.

“Me and her, I like to say we’re kind of a power duo,” said Munn, a junior who improved to 32-2 on the season in the two-day tournament. “She helps me; I help her. She’s an awesome wrestler.”

Platte County brought six wrestlers to District 7 competition, but only Munn and Bertram survived the first weekend of a postseason format revamped due to COVID-19.

With the number of qualifiers reduced, the importance of seeding for sectionals increased.

Munn dominated in the 195-pound bracket, winning each of her four matches by fall with none lasting longer than 3 minutes, 27 seconds to earn her first district title. Bertram, a fourth-place finisher in state at 165 pounds as a junior, received a bye into the quarterfinals and won her first match by fall. However, she controlled a pair of tight decisions in the semifinals and finals of the 159 bracket to earn her second straight district title.

“I had my doubts here and there, but I knew in the end with all my hard work I put in I wanted to be a district champion again,” said Bertram, now 36-1 on the season. “And trying to just prepare for sectionals, of course, and I had to give my 100 percent in all these matches because I know I’m going to see them again at sectionals.”

Bertram controlled her semifinal against Oak Park’s Nevaeah Wardlow but needed a third period takedown to add some distance and finish with a 5-2 victory. Bertram then matched up with Smithville’s Emily Knight in the 159 championship match — the pair’s third matchup this season.

After exchanging escapes in the second and third periods to create a 1-1 tie, Bertram and Knight went into overtime, and Bertram remained patient and came up with a convincing takedown for a 3-1 OT decision with just 3 seconds left in the 1-minute sudden-victory period.

The three matches have become progressively closer this season with Bertram winning all three by scores of 7-2, 5-2 and 3-1.

Munn didn’t have near the same excitement in her matches. She opened with pins in 48 seconds and 47 seconds to reach the semifinals where she matched up with Liberty North’s Kate Grundy. The match was scoreless entering the second when Munn started in the down position and rolled through for a reversal and quick pin in 2:37.

In the finals, Munn matched up with William Chrisman junior Mary-Mae McMillian, who had won all of the previous matchups between the two including the 197-pound fifth-place match at state a year ago. This time, Munn controlled from the outset and even scored a quick takedown that led to an awkward position where the official inadvertently called for a pin before restarting the match with McMillian in a much-less precarious position.

“At first, I just kept wrestling because I thought if he made the mistake and I was still wrestling he would just forget about it,” Munn said. “But then, we stopped, and I was just like, ‘OK, just got to keep going.’ I was there; let’s get there again. Listen to my coach, don’t get down and stay high energy.”

In the second period, Munn continued to work from the top position and succeeded in turning McMillian and pinning her in 3:27.

“Last time I wrestled her, I was at state, and so it’s been a year,” Munn said. “I’ve made a lot of improvements, and I’ve worked really hard. And I also kind of know how she is as a wrestler, so I just to (wrestle) smart. At the end of the day, I try to wrestle my match, and it had nothing to do with her. It didn’t matter who was in front of me. I was wrestling my match out there today.”

Platte County experienced early success and actually sat in second place as a team after Day 1 — just one point behind eventual team champion Staley. The Pirates then faded to eighth out of 19 teams Saturday with junior Chey Weir (102), sophomore Haley Burge (107), junior Elizabeth Humburg (127) and sophomore Audrey Call (132) each losing tight matches to see their seasons come to an end.

“I almost cried during most of them because they’ve all worked so hard this season,” Bertram said. “Me and KayLyn, all of us, knew we came in here we were most likely all going to go to sectionals, so it was kind of disappointing seeing them lose.”

Humburg held a 3-1 lead going to the third period of a consolation match with Smithville’s Noelle Parrott, who then got an escape and a takedown in the closing seconds to seemingly take a 4-3 win. In the process of the takedown, Humburg suffered a shoulder injury, and the match was briefly stopped with a penalty point awarded to her for a clasping call against Parrott.

A first-year wrestler, Call led Fort Osage’s Sidney Sullivan 4-0 entering the third period. Call chose neutral and used a headlock to throw Call to her back and pin her in 4:29.

Weir recovered from a quarterfinal loss and reached the consolation semifinals. She ended up in an adventurous match with Lexington freshman Miranda Braden, who gave up an early takedown and trailed 2-0. Braden the scored a reversal late in the first period to tie the score and chose neutral to start the second, throwing Weir to her back in a five-point headlock.

Braden eventually worked the headlock to an illegal hold for a penalty point, and Weir added a reversal to close within 7-5. Weir tied the score with a reversal but then gave the lead back on a reversal only to get another penalty point with 33 seconds left in regulation.

Weir couldn’t come up with an escape in the remainder and lost 9-8.

Like Betram and Munn, Burge reached the semifinals but lost by fall to enter the backside needing just one win to advance to state. Burge had an initial 2-0 led with a takedown of Oak Park’s Madison Rulon but trailed 3-2 after the first period 10-2 after giving up a takedown and going to her back for three near-fall points early in the third.

Burge scored a reversal and granted an escape with 16 seconds to go before throwing Rulon to her back and appearing to have a fall for nearly 9 seconds. Instead, the referee saw time run out, and Rulon same away with a somewhat controversial 11-9 victory by decision.

Platte County coach Reggie Burress mildly protested after the match, believing the referee should have awarded the pin in the final seconds with Burge tightly squeezing a headlock.