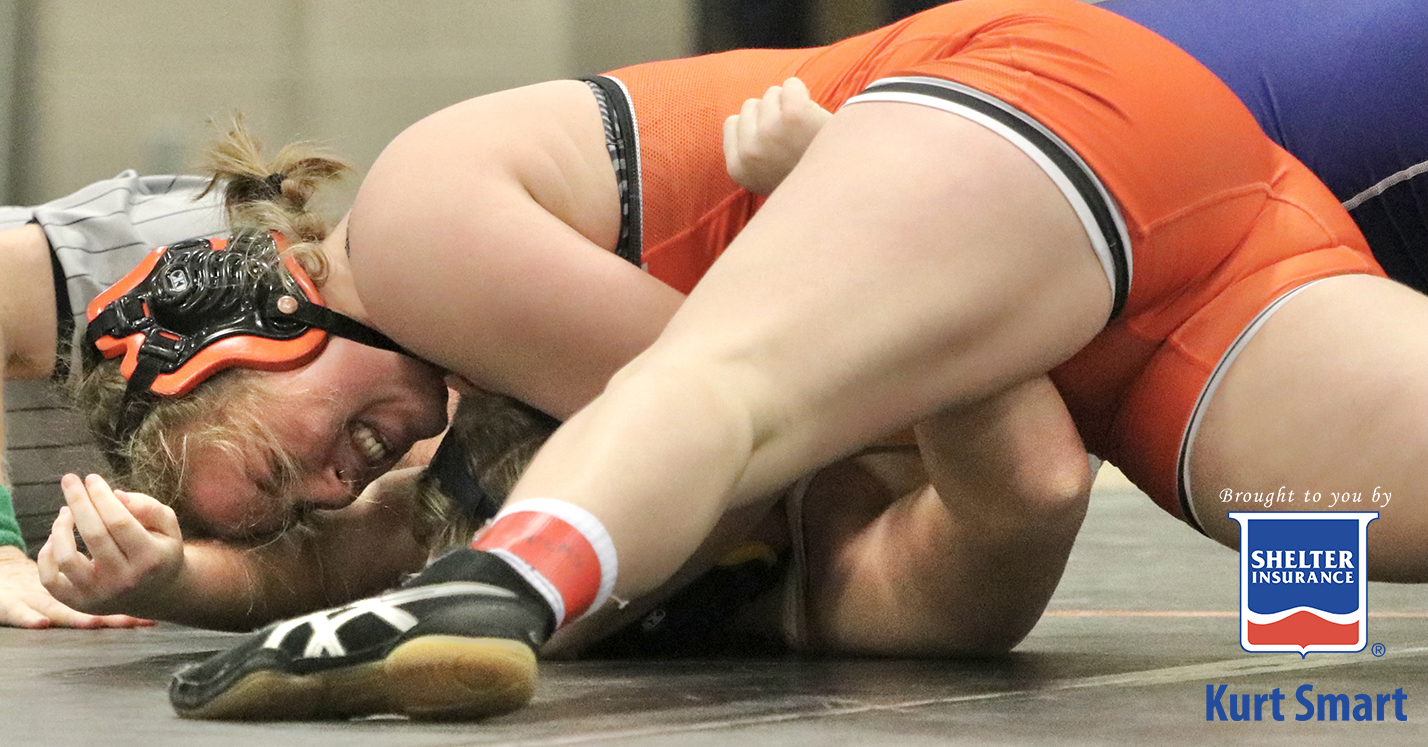 Sarina Bertram and KayLyn Munn have shared the practice room, the responsibility of leading a program through infancy and ultimately a special bond that will forever keep them connected.

On Saturday, Platte County’s top two wrestlers again took turns standing on top of the podium at the end of the Sectional 4 tournament. The Pirates’ lone qualifiers both won individual titles in their home gymnasium — Bertram at 159 pounds and Munn at 195 pounds — to earn return trips to the Missouri State Wrestling Championships.

Bertram had already become the first two-time district champion for Platte County, while Munn’s first district title two weeks earlier didn’t mean quite as much in this year’s revamped postseason format. Instead, the sectional crown sent her to state for a third time, once in each of the first three seasons for the sport in Missouri.

Now, Bertram and Munn have just one day of competition left together — Tuesday, March 9 at Silverstein Eye Center in Independence — where both will look to make more history and win state titles.

“Sarina and I started the program together. We’ve been wrestling for three years now,” Munn said. “I wouldn’t want any other partner with me to celebrate with, to cheer on me. I’m so excited to go to state with her — one more time.

“I will miss her next year. We’ll be just as fired up and dominant at state. I truly believe that.”

In previous seasons, wrestlers qualified for state straight from large districts, but a new format for the postseason meant the top four from districts advanced to eight-wrestler brackets at sectionals. To limit the number of attendees, only the top three finishers advanced to 12-wrestler state brackets.

Munn (34-2) received a break in her path with a first round bye in sectionals. She then faced a district rematch with Liberty North junior Kate Grundy. The second semifinal meeting of the postseason between the two ended similar to the first. Scoreless going to the second period, Munn chose down and quickly reversed Grundy to her back with a rollthrough and earned the pin in 2 minutes, 23 seconds.

Already guaranteed a state spot, Munn then turned attention to North Kansas City senior Amber Houston, who handed her the only head-to-head loss on her ledger this season. Houston, who finished fourth at District 7 two weeks earlier, struck early in the final scoring a quick takedown and forcing Munn to belly down late to avoid going to her back.

Munn very quickly recovered, reversing Houston to her back and pinning her at the 1:07 mark of the first period. Platte County coach Reggie Burress has spent time reminding Munn of the mistake she made in the first loss to Houston, and Munn was prepared for the rematch in a high-profile spot.

“I’m definitely proud of myself,” said Munn, who has won all six of her postseason matches by fall — none going past 3:27 — and enters state ranked No. 3 at 195 pounds. “I think it was a little energy, a little anxious (for that match). Burress makes fun of me for that match all the time, so it’s kind of like I need to step it up, not let it happen again.”

Bertram (39-1) continues to sit at No. 6 in the 159 rankings but has been as high as No. 1 this season, falling after her only loss in early January. She dominated each of her three matches but had only two total takedowns in all three decision victories, much different from her typically offense-heavy performances.

“I just need to pull the trigger because my shot’s there,” said Bertram, who has five straight wins by decision in the postseason but has not allowed an offensive point to her opponents in six total matches. “I freak out a little bit before my matches, but I’m going to work hard these next two weeks trying to fix that.”

Bertram won her first round match 3-0 over Clarissa Kissire of Cameron. Bertram took the lead with an escape early in the second period, and Kissire took two stalling warnings and gave up another point before the start of the third. She chose bottom in the third but couldn’t escape and picked up another stalling penalty point with 45 seconds left in the match.

Like Munn, Bertram faced a semifinal rematch with a wrestler she beat in the semifinals at districts. Oak Park freshman Nevaeh Wardlow led 1-0 after an escape in the second period, and she too picked up a stall warning before reaching the third.

Bertram tied the score with an escape and then came up with the winning double-leg takedown with 23 seconds left in regulation for a 3-1 decision.

In the finals, Bertram faced Brookfield junior and District 8 champion Oscarina Jackson, who pinned Smithville junior Emily Knight in overtime of their semifinal. Bertram defeated Knight in a 3-1 overtime decision for the District 7 title.

Bertram went through the first period scoreless for a fourth straight match but took a 2-0 lead with an escape and then a penalty point assessed to Jackson for grabbing Bertram’s headgear. Jackson’s escape to start the third period closed the gap to 2-1, and Bertram fended off multiple headlock attempts from her opponent in the closing seconds.

Eventually, Bertram came up with a takedown as time closed to complete a 4-1 decision victory.

“The fact that she was trying to throw a headlock at me like five times, I just knew I had it there and she was tired and I wanted to finish really strong,” Bertram said. “I told Burress before the match I wanted no gas in the tank, so I had to finish it off.”

As founding members of Platte County’s program, Bertram and Munn have been consistently rewriting the record book. Bertram placed fourth in state at 165 as a junior, while Munn’s second trip to state a year ago ended with a sixth-place finish. They now have a chance to become the first two-time state medalists with both in a position to compete and potentially win the Pirates’ first state title in girls wrestling.

“The biggest difference this year is my mindset,” Munn said. “It doesn’t really matter for me who’s in front of me. All these girls are talented, but I’ve gotten to a point where I realize I’m wrestling myself more than my opponent.”