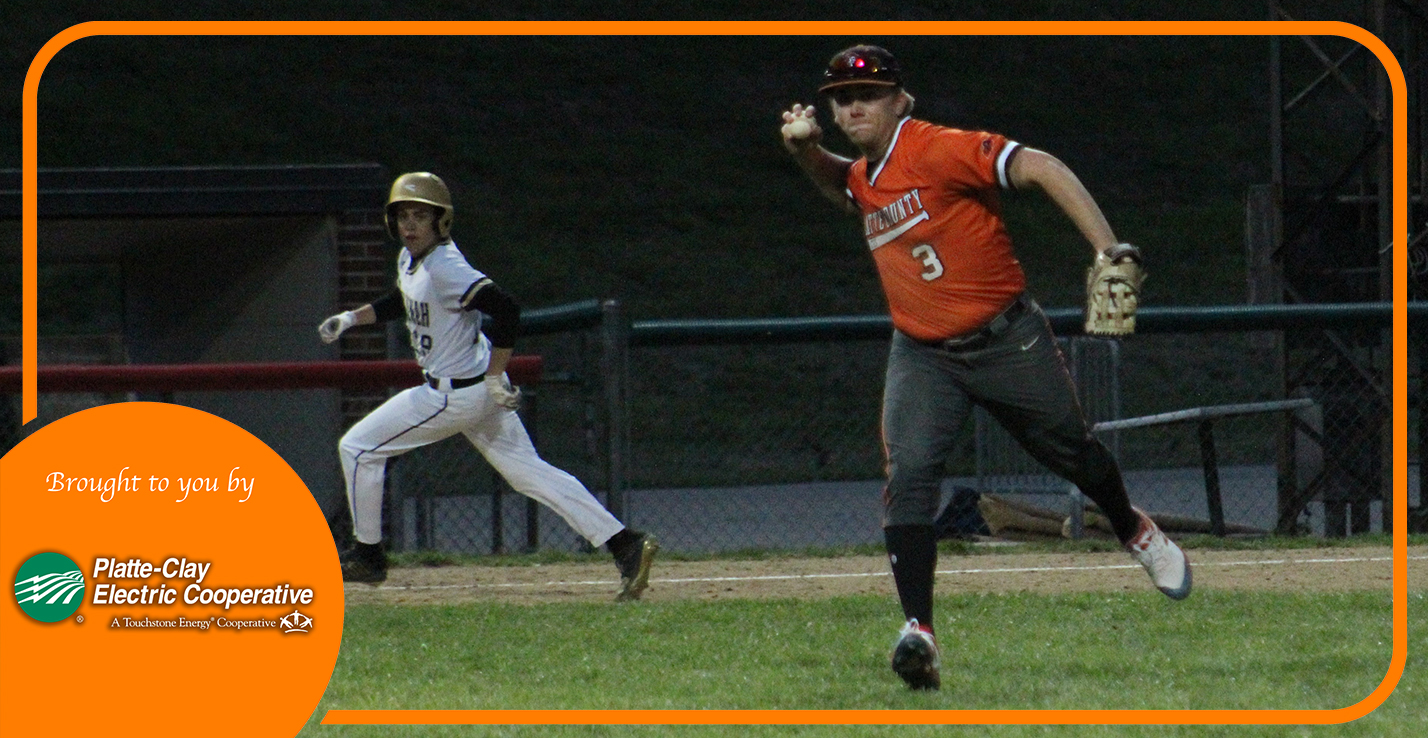 Platte County senior third baseman Sam Peterson looks to throw to first base while on the run against Savannah in the third-place game of the Pony Express Tournament on Thursday at Phil Welch Stadium. ANTHONY CRANE/Special to PC Preps Extra

Platte County’s uncharacteristically all but disappeared late in the week, leading to a pair of losses and a fourth-place finish in the Pony Express Tournament played in St. Joseph.

Savannah avenged two prior blowout losses with a 4-0 win over Platte County on Thursday at Phil Welch Stadium in the third-place game. The Pirates managed just three hits and didn’t get the first until freshman right fielder Devin Wassmann singled in the fourth.

A day earlier, Lafayette senior left-hander Brayden Luikart — an Oklahoma University commit — did not-hit Platte County in the semifinals. The Pirates didn’t score and had only three hits in the final two games of the week-long tournament after a tougher-than-expected win in the first round.

Platte County thrashed Savannah in both halves of a weekend doubleheader earlier in the month, but the rematch went entirely different. The Savages scored twice in the second and took a 3-0 lead in the third before the Pirates collected their first hit.

Those runs were charged to senior starter Sawyer Allen, who struck out three but walked three while allowing only two hits in three innings of work.

Platte County junior Kole Jenks threw the final four innings and scattered three hits, allowing only one unearned run in the top of the seventh. The Pirates went down in order in their final time at bat while trailing 4-0.

Wassmann finished 2-for-3 with a double that came with two outs in the bottom of the sixth. He was stranded there. Jacob Knudsen, a junior catcher, also had a single, and the Pirates drew just two walks.

Platte County dropped to 11-4 overall with the loss going into Monday’s home Suburban Conference Blue Division matchup with Grandview. The Pirates started the season 7-1 but have went just 4-3 in the past seven.

Luikart struck out 13 total and recorded the final three in the top of the seventh to finish off his no-hitter Wednesday at Phil Welch Stadium.

Platte County drew four walks and benefited from a pair of errors but stranded five runners, three in scoring position. The Pirates actually had opportunities throughout to score but ran into a pair of outs early — senior Sam Peterson caught stealing in the second and Wassman picked off in the third — and were unable to score runners in scoring position late.

Lafayette took a 3-0 lead in the bottom of the third with three unearned runs off of senior starter Landon Fulk, who struck out five and allowed four hits and four walks. Platte County opened with an error, and after an intentional walk, the Fighting Irish scored on two RBI singles and a run-scoring groundout.

Fulk came out after allowing a leadoff single in the bottom of the fifth, and senior reliever Jackson McMahan allowed the inherited runner to score plus one more to make it 5-0. The runs scored on a wild pitch and passed ball.

McMahan walked three and allowed one hit while striking out four in two innings of work.

Platte County had a walk and an intentional walk in the fourth , and senior catcher Cayden Davis was hit by a pitch followed by a walk from junior second baseman Ben Spence in the fifth. All four reached with two outs and were stranded.

Luikart hit Platte County sophomore Jeter Mauzey with a pitch to start the sixth and then mowed down the next six in a row — five by strikeout — to send Lafayette to the title game where they lost to Smithville.

The Pirates fell behind 5-0, scored nine to take the lead for good in the third and then held on after an adventurous sixth inning Monday at Phil Welch Stadium.

Platte County senior Alex McClure earned the win despite allowing five runs — only three earned — in two innings. He struck out five but also issued five walks and allowed three hits as the Pirates fell behind 5-0.

The tide changed in the top of the third when Platte County sent 15 to the plate and scored nine runs with two outs.

Platte County junior shortstop Cameron Lewis reached on an error with one out — one of three Chillicothe committed in the marathon inning — but after a strikeout, the Pirates were in danger of remaining down big. Instead, Spence singled in Lewis, and senior center fielder Dayton Mitchell singled and Mauzey doubled in two to pull the Pirates within 5-3.

Chillicothe then fell apart with a walk, a second error and three more walks in a row. Knudsen singled in two to put Platte County up 8-5, and Mitchell was hit by a pitch with the bases loaded for the final run of the inning.

The key for Platte County ended up being three runs in the top of the sixth to push the lead back out to four runs.

Mauzey walked, Peterson singled and junior Eli Nelson walked to load the bases. Allen single din a run with his only hit, and the final two runs came on a bizarre sacrifice fly that included an error on the catcher, who then threw out Allen trying to reach third on the same play.