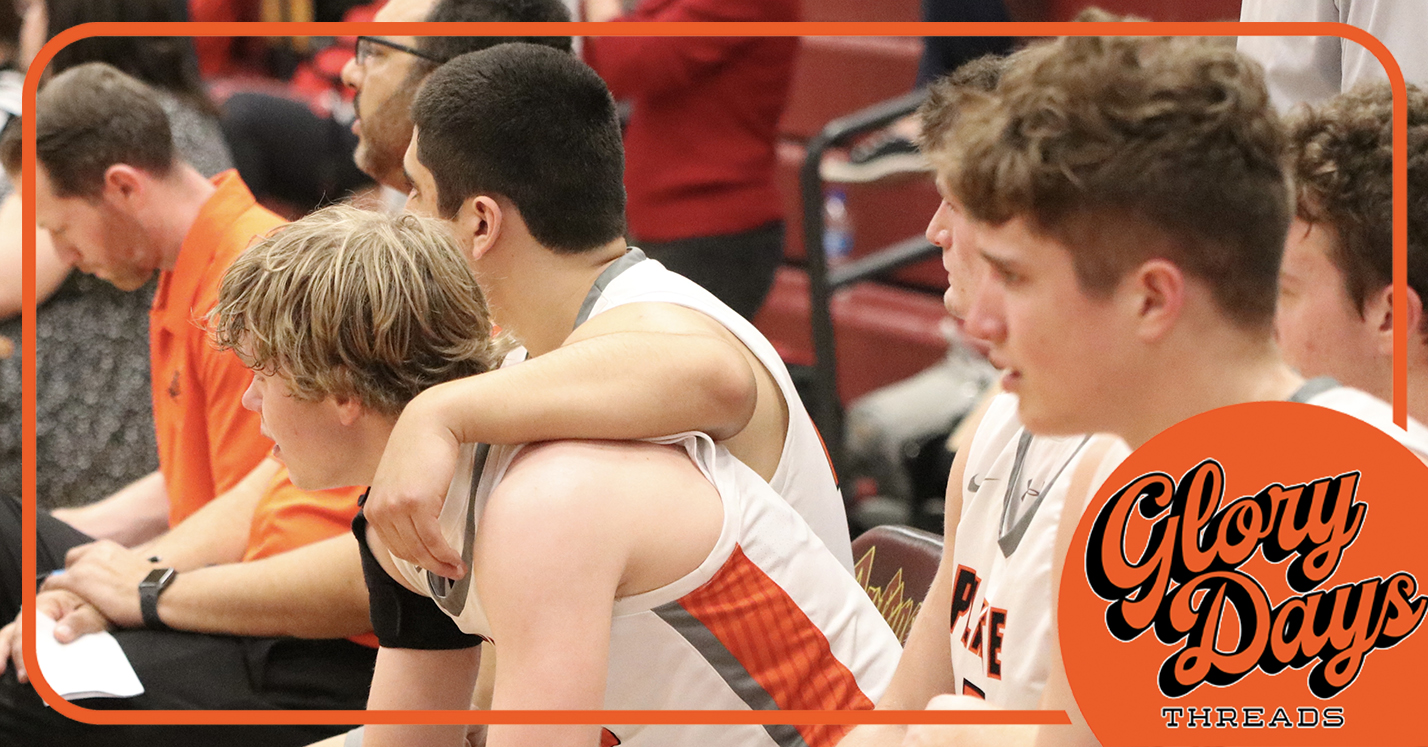 KANSAS CITY, Mo. — Platte County senior Brody Fulk loosely held the plaque in his left hand, occasionally stealing a glance at the jubilant scene behind him. The rest of the emotionally invested players for the Pirates did the same at uneven intervals.

The finality of Platte County’s season — and the careers of seniors Fulk, Jarett Mueller, Jace Trimble, Isaac Havemeier and Eli Nelson — came as swiftly as it did cruelly in Thursday’s Class 5 District 8 championship game. William Chrisman’s hot shooting and a quartet of double-digit scorers fueled what became a 78-49 runaway at Winnetonka High School. The Bears’ season continues in this week’s state quarterfinal round round against Helias. The Pirates were left to absorb the result and what could have been, denied a playoff trip for a second straight season in what has otherwise been a historic two-year run for the program that included a share of two straight Suburban Conference Blue Division titles and back-to-back 20-win campaigns.

Not all stories receive the deserved ending, much less have the narrative play out for the desired amount of time.

“These kids deserved their moment, but we’re not going to lose sight of the fact they’ve accomplished a lot over the past two years,” Platte County veteran coach Rick Hodge said. “These seniors have put a lot of time into our program, and when you accumulate all of that and what they’ve done and their hard work, of course you want them to come away with the first-place trophy, but unfortunately, tonight it was Chrisman’s night.”

Mueller scored a team-high 14 points in what ended up the last game of his career, while Trimble added eight. Fulk (three) and Havemeier (two) were held to one basket apiece, while Nelson hit a 3-pointer in the fourth quarter for his only field goal off the bench.

Platte County (22-5) trailed by more than 30 and faced a running clock for portions of the fourth quarter, unable to keep the contest competitive after halftime. The top-seeded Pirates wilted after losing junior forward Chandavian Bradley to an apparent left ankle injury late in the second quarter with second-seeded William Chrisman (21-7) drilling 12 3-pointers and slowly pulling away in the second half.

Eventually, Hodge pulled the Platte County seniors from the contest to a standing ovation from the orange-and-black portion of the crowd with 2 minutes, 29 seconds left in regulation.

“Just the people,” Mueller said of what he will miss most about playing for the Pirates. “I mean there’s nobody like Hodge. There’s nothing like playing basketball with my four best friends. There’s just nothing like the family we’ve created. I’m going to miss stepping on the floor with my brothers.”

A 6-foot-6 major Division I football recruit, Bradley scored 10 points in the first half before spending the entire second half with his foot iced and elevated at the end of Platte County’s bench. Minus a budding star who scored in double figures in all but one game during the 2022 portion of the season the Pirates suffered their largest margin of defeat of the season by a significant amount. The first four losses were by a combined 19 points with two of them coming in overtime — one in double overtime — to Ruskin that ultimately forced the share of the conference title.

“You’re right; it wasn’t,” Hodge said, affirming this type of result didn’t even cross his mind going into the game. “You have to give Chrisman a lot of credit. They shot the ball very, very well tonight. They played very physical on the defensive end and messed with what we were trying to do there, too.”

William Chrisman never trailed and survived two small threats. Early in the first quarter, the Bears feasted on second-chance opportunities while Platte County struggled to score then switched to the outside attack to build a 13-point halftime advantage. The Pirates went nearly 3 minutes without a point before Bradley hit a jumper in the lane on an inbounds play from under their basket to make it 4-2.

Five players scored in the first quarter for William Chrisman, which finished on a 9-2 run capped with the first of four 3-pointers for sophomore reserve point guard Trey Taylor (16 points).

“Usually we hit enough enough shots early,” Hodge said. “Or at the free throw line, we finish there so we can hand with teams and work those feelings out or work through a little bit of a shooting slump.”

Platte County answered with its best offensive stretch of the game over the next 2 minutes. Mueller drove to the basket for a layup, and Bradley added a 3-pointer and then a block at the other end to return possession to the Pirates.

Trimble drove to his right and swung a pass from under the basket out to Bradley in the left corner. He sank his second 3 to make it an 8-1 run that forced William Chrisman into a timeout with the lead down to 14-12.

Platte County entered off of a semifinal comeback against Lincoln Prep, erasing a nine-point lead to stave off an upset and advance to the championship game.

“We got it right down close, and then they just hit every shot it seemed like tonight,” Mueller said. “It was definitely their night and definitely wasn’t ours.”

William Chrisman immediately answered with an 8-1 run that became a 16-5 stretch, receiving four 3s from four players, while Bradley injured his ankle coming down after being called for a goaltend.

A 3 from senior leading scorer Dayne Herl pushed William Chrisman out to a 27-17, and Taylor hit his second to make it 30-17. Both teams missed shots from the outside in the final minutes, and the Pirates went into the break after their worst offensive half of the season that included a 1-for-7 showing on free throws.

“Usually that’s us sticking a lot of 3s and getting momentum and rolling and then the other team is on their heels trying to catch us, but tonight, it was a little bit reversed,” Hodge said.

With Bradley not coming out for the second half, Hodge turned to Nelson and sophomore reserve Judah Vignery to fill key minutes.

Platte County also tried to up the defensive pressure while also needing to replace Bradley’s presence on the inside. Both teams went scoreless for nearly the first 2 minutes of the third quarter, and Havemeier’s inside bucket cut the deficit to 11. The Bears immediately answered with a lightning quick 7-0 runs to go up 37-19.

Out of a timeout, Fulk scored his only bucket, and Vignery and Mueller both came up with 3s to cut Platte County’s deficit to 15. The Pirates were briefly within 14, only for Herl (11 points) to hit a 3 at the buzzer that made it 49-30 and ultimately ended any hopes of a comeback.

“They exert so much energy coming back to cut the lead and get it within striking distance,” Hodge said. “You’re trying to go bigger lineup because we were getting punded on the offensive glass, and then their guards started hitting shots. Now, you’ve got to go smaller lineup, and now, it’s the inside game and putbacks. They were very balanced tonight.”

William Chrisman senior guard Jessie Minter (game-high 19 points) rained in the second and third of his 3s in the fourth quarter as the lead quickly ballooned and left Hodge with only one decision to make — when to bring out the seniors who twice put Platte County in position to end a playoff drought dating back to 2010. Kearney upset the Pirates in last year’s Class 5 District 16 title game before the Missouri State High School Activities Association shuffled the postseason format and made eight-team brackets.

Platte County again came up a game short of just the sixth playoff appearance in program history and just the third since winning three in a span from 1954 to 1960. The others were in 2004 and 2010.

Despite the setback, Mueller believes the past two years have made a change that can last.

“The culture that’s come out of it, the gym’s going to be packed from here on out because of what we’ve set the standard to be,” Mueller said. “The underclassmen just have to get to work in the offseason, and I’ll be back to see the stands full again next year.”

Platte County’s only other back-to-back 20-win seasons in program history came in 2003 and 2004 with stars Kirk Stegeman and Lorenzo Riley leading the way. The group this time around didn’t include the same type of star power and started with 2021 seniors Joey Schultz, Alex McClure and Jaden Burnett.

This year’s senior group — part of 42 wins over the past two seasons — was equally diverse and included Mueller, the two-year leading scorer who flirted with a 1,000-point career; Trimble, the two-way, two-year standout starter who carried the Pirates for two games in December after Mueller missed two games with a right shoulder injury; Fulk, the do-a-little-bit-of-it-all, selfless senior forward; Havemeier, the first-year contributor who started all season after nearly quitting as a C-team freshman; and Nelson, the reliable, versatile defender who started and came off the bench as a key part of a thinner rotation from a year ago.

The final chapter for this memorable group didn’t properly reflect the previous chapters written for Platte County, reviewable examples for Bradley, Vignery, juniors Parker Amos and Boston Wahlert and freshmen Dayton Doll and Jaden Peterson to follow in an effort to sustain momentum for the program.

“Their example on how to work, how to stay focused, their determination and how hard they play and how hard they compete,” Hodge said. “We’re going to miss these five seniors. Everyone of them had a role; everyone of them understood what it took to be successful. All five of them did what they could to be as successful as they possibly could, and I’m really hoping the younger kids can learn from that.”